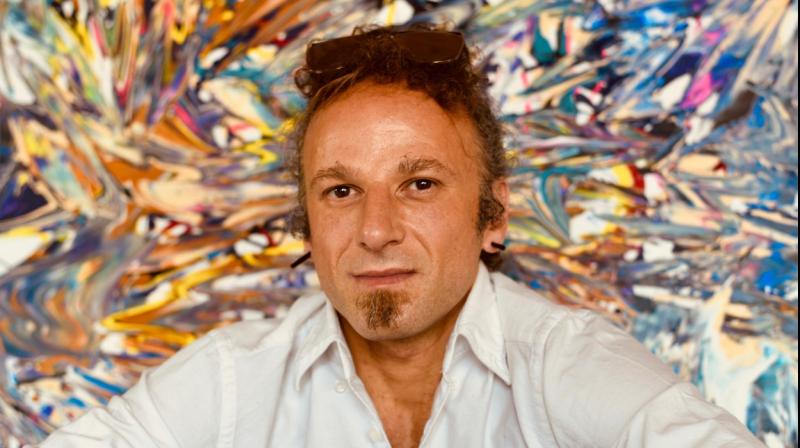 Dipping into vibrant hues of yellow, orange, and red, the jeans are then sold through an exhibition to raise funds

Ditching the traditional ways of fundraising, Dar calls upon celebrities to donate their denim, which he then spruces up with his colourful imagination. “I came with the idea after being fed up with not being able to do anything for the refugees.

Finally, the idea sparked on a flight from Los Angeles to London,” says Dar who found denim to be the closest material to the canvas that he usually works on.

Dar’s initiative is supported by Hollywood bigwigs such as Olivia Colman, Victoria Beckham, Emma Watson, Daniel Radcliffe, Joaquin Phoenix, Scarlett Johansson, and Pink, to name a few. Dipping into vibrant hues of yellow, orange, and red, the jeans are then sold through an exhibition to raise funds.

“We are not going about the traditional way of raising funds and awareness by further showing the ugliness of the crisis. We are working towards rebuilding the identity of refugees in the collective consciousness. Our aim is to change people’s attitude towards the refugee problem and to help refugees themselves change their attitude about the crisis they are living through,” says the 42-year-old designer who has now made inroads into Bollywood and has received a favourable response from actors such as Hrithik Roshan, Jackie Shroff, Sara Alia Khan, Kriti Sanon, Ali Fazal, Daisy Shah, Esha Gupta, and even fashion designer Manish Arora.

“We would love for Priyanka Chopra, Katrina Kaif, Deepika Padukone and Kangana Ranaut to get involved, as well as others. There are so many wonderful Bollywood stars we would like to welcome on board,” he adds.

When asked if he has a favourite pair of jeans that he redesigned, Dar reveals that he loved working on Harry Potter star Emma Watson’s jeans.

“Emma has her personal fairytale going on that shows so nicely in how her jeans turned out. I really loved working on these - it was painting a story and getting to know it while I painted it.”

Of painting dreamy vibrant interpretation on singer Pink’s jeans, Dar says, “She has a big heart that means love; the way she keeps it real and addresses many important topics through her music which is why her support means a lot to this project. Her jeans turned out to be colourful and a vibrant energetic expression that was a true pleasure to work on.”

When asked if any of the denim donors provided their own creative input, the designer recalls German model, actress, and fashion designer Claudia Schiffer being anxious.

“She was very concerned about how her jeans would look and kept in close touch during the process. Most others trusted me,” he reveals, adding, “But Elton John decided to send a jacket rather than his jeans. Coming from Elton John, even his socks would have been fine.”

On the other side, the Jeans for Refugees initiative came with its challenges as well. Dar opines that it can be increasingly difficult to reach people who acquire mammoth fame quickly.
As a result, the fashion designer even faced disappointment from a friend and actor Jennifer Lawrence for not understanding the value of their participation.

“She thinks that she should only contribute to local charities, even though her audience is an international one. Sometimes I feel people get overwhelmed with holding that position in the limelight and become refugees themselves, locked up in their own circles, thinking that life only exists right there,” he asserts.

Though the artworks on the jeans are not symbolic, the designer still draws with his feelings. “I consider myself a feeler before anything else. I feel things and I draw with it. Turning each pair of jeans into artwork was about picking up the feeling that the celebrity left behind. My job was to be the feeler that feels it, and bring out the express