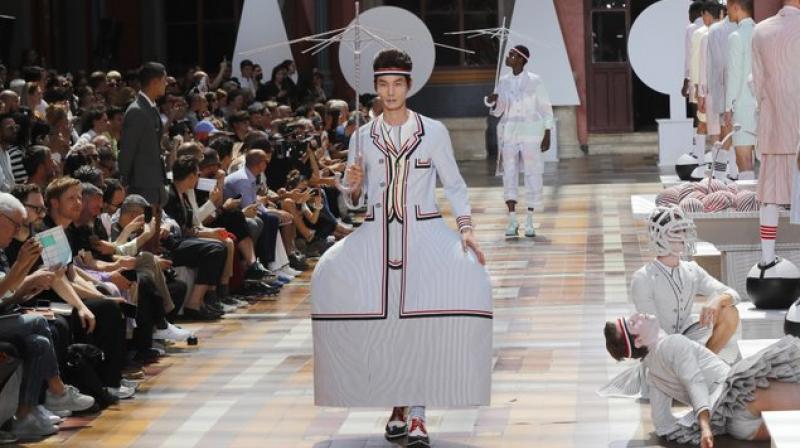 Paris: A frothing cherub fountain constructed of striped fabric drew the eyes and camera lenses of VIP guests at Thom Browne’s fantastical Paris Fashion Week show on Saturday. Here are highlights from Browne and other designers for spring-summer 2020 menswear, including the many houses showing co-ed collections.

The incredible fabric fountain led the gaze of guests, who included NBA star Serge Ibaka, inside the Ecole des Beaux-Arts on to a line of frozen human mannequins decked in dramatic A-line doll costumes. Standing on alabaster plinths, they sported bowling balls for shoes.

A male ballet dancer suddenly appeared wearing a tutu, tailored suit and tie and ballet shoes instead of the balls. His sublime performance enthralled guests, as the human mannequins were slowly undressed, to begin the show.

The fashion house described it as the designer’s “secret garden.” Such sensational and transgressive spectacles are why Thom Browne so quickly garnered a reputation since moving from New York to Paris in 2017 as one of the most exciting tickets of the fashion week calendar.

Against the backdrop of the fitted, tailored suit that is the house’s staple garment this season, Thom Browne took historic fashion items and humorously subverted them. The codpiece, a covering flap or pouch attached to the crotch of men’s pants, was fashioned atop tailored shorts in pale seersucker and a tennis skirt-tutu hybrid.

The oversized “pannier” skirts Marie Antoinette made famous with help from rigid undergarments was the idea behind a giant pair of culottes and a coat which spread out horizontally like the dramatic silhouette of the 18th-century French queen.

It’s a style that at Thom Browne also spawned ribbed American football helmets, which were sported by models wearing ballet shoes in this highly inventive spring collection. The message behind the 38 looks was clear: Rules pertaining to culture, gender and history are only there to be broken.

Model Gigi Hadid headlined the Berluti men’s show earlier this week, decked out in women’s wear. Moments like these, in which female models are seen showcasing women’s wear styles during the so-called men’s calendar, are now common at Paris Fashion Week.

Givenchy, Saint Laurent and Kenzo are among the brands that have gone co-ed while showing recent designs. The Paris fashion industry proudly considers itself to be gender fluid, forward-looking approach critics have feted.

But the reasoning behind gender-bending in Paris might not be simply a matter of style. New data suggests a financial analysis is at play. “Simply put, our metrics show that men’s collections that feature women get a whole lot more media attention, and that means money for the houses,” Jessica Michault, a fashion journalist and senior vice president of industry relations at data analytics company Launchmetrics, said.

“Fashion shows these days are mainly intended as advertising for the brand and going co-ed pays. Houses do it to stay relevant,” Michault added.

What do untied bow ties, combat jackets, zebra prints, sandals, denim shirts and tulle have in common? Sacai threw the normally unrelated facets of fashions into the creative mix for an eclectic co-ed show at Paris Fashion Week.

One of Japan’s most lucrative fashion houses, Sacai has built a reputation for the avant-garde and quirky. In Saturday’s collection, it took the staples of black tie dress — such as the white shirt, bow tie and pocket outline — as a starting point and then had fun with both men’s and women’s designs.

The palette was muted, mainly black, white and khaki, but the contrasts in the 57-look show were delivered through the intentionally contradictory styles of dress. A silken bomber jacket paired with shorts followed a grungy shirt worn with office pants and comfortable zebra sandals.

There were some great individual pieces, like a double-layered white shirt with a collar resembling a hoodie. But this season, did the house’s designs lack a little visual punch?

A dash of geometry — through ’80s prints, stripes and checks — spiced up the tasteful luxuriance of the Hermes man this season. Spring saw styles loosen up. Firstly, this meant loose silhouettes: Such as in baggy smoky or gold-brown pants, or in a pink knit sweater with a diagonal stripe.

But it was also a looser vibe: With sandals and a half-buttoned, white-coffee-coloured jacket worn on naked skin. Beautiful leather bags furthered the show’s geometric detailing and honed its mastery in colour — with indigo, Prussian blue and black forming the segments on one stand out design. Veteran designer Veronique Nichanian, it seems, can do no wrong.