Past and present merged at Donatella Versace's joyous, celebratory, healing runway tribute for brother Gianni, 20 years after his death. 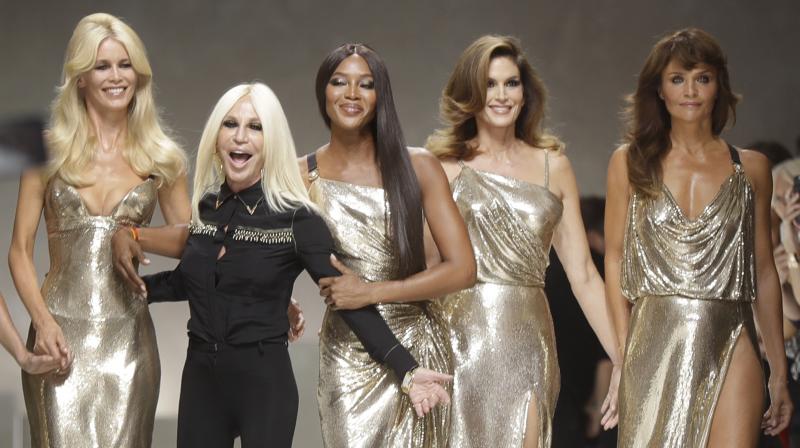 From left, Claudia Shiffer, Donatella Versace, Naomi Campbell, Cindy Crawford and Helena Christensen on the catwalk at the end of the Versace women's Spring/Summer 2018 fashion collection.

On the third day of Milan Fashion Week, past and present merged at Donatella Versace's joyous, celebratory, healing runway tribute Friday to her brother Gianni Versace, 20 years after his slaying in Miami.

And it culminated with her own reckoning with how she has born the weight of her brother's creative legacy.

Donatella feted her brother as a designer who empowered woman, a legacy that she has sought to maintain.

"This show is for him, from beginning to end," she told reporters backstage.

Here are some highlights from Friday's womenswear looks in Milan for next spring and summer, featuring Versace, Giorgio Armani and Roberto Cavalli.

GIANNI VERSACE GETS TRIBUTE FROM SISTER

Donatella Versace said she went back into the archives for the first time since her brother's death and pulled out 12 prints that she reproduced for this tribute collection, including Andy Warhol, Vogue and My Friend Elton from 1991, and Wild Baroque, Anomalies and Native American from 1992.

"Only after 20 years could I do that, even if the pain is the same," Donatella said.

But the silhouette was all Donatella, slim and empowering, in recognition of the shift in tastes over the years.

Long gone are the big shoulders of the late 1990s. There were belted trenches, tight bodice mini-dresses with cropped jean jackets, sleek evening sheaths and fuller skirts worn with denim tops. There were mini-skirted suits and ruched dresses in pastel pink, blue and green.

And there were monochrome leggings inspired by the 1990s and worn with matching color jackets. Heels were high and the stride was strong.

"I feel like I did what I had to do. I feel I can share my memories and my journey. I am happy I did it," she said.

Going back into the archives also provided a window into Donatella's own journey, after being thrust unexpectedly and tragically into the creative role.

"I asked why I took so long to find my way," she said. "The first few years I wasn't sure of myself. I made mistakes. But you learn from your mistakes."

RETURN OF THE SUPERMODELS

Gianni's supermodels wore liquidy dresses in metal mesh inspired from Gianni's fall-winter 1994 collection. They stood in a solemn tableau, then joined Donatella for a tribute lap down the runway.

Versace said they were all staying on the same hallway and all visiting each other like long-lost girlfriends.

"It is the same atmosphere, the same competitions of who wants to be in the center," Donatella said.

For the final tableau, Campbell won.

MOTHER-DAUGHTER LEGACY: CATSUITS ON THE RUNWAY

Kaia Gerber walked in the Versace runway show Friday wearing an updated version of the same yellow print catsuit that her mother, Cindy Crawford, wore on the cover of Vogue back in the day.

The catsuits were replicas, Donatella said, because the originals are tight in places that a generation accustomed to stretch fabrics could not tolerate. Only one garment, a tiered skirt, was the actual piece that Gianni himself created.

Versace invited a trio of Italian designers that she said take the same sort of creative risks that her brother did in his time: Alessandro Michele of Gucci, Pier Paolo Piccolo of Valentino and Anthony Vaccarello, formerly of Versace's Versus line.

Also on hand was Formula 1 driver Lewis Hamilton and Kendall Jenner's mom, Kris Jenner, who sat poised with her smartphone snapping models as they emerged from backstage.

The 83-year-old designer's Armani collection for next spring and summer bursts with florals and color, often on a background of black. The silhouette is loose and feminine, with short skirts featuring leg-revealing tulip hemlines, sheer organza pantsuits with an easy cut and casual apron dress with abstract florals.

The designer often layered florals and prints over dark underlays — perhaps a message to see the brighter side of things. At other times he placed a sheer layer over prints, creating a smoky effect. Silken printed skirts opened over a black dress, or a long, draping foulard tucked across the front of a cocktail dress. The prints were inspired by painters, the designer won't say whom.

"I respond to sadness with color," ANSA quoted the designer as saying.

The primary color combinations for daywear are red and purple with black accents, segueing into grays for formal suits and black for evening.

Despite the designer's intentions, long black veils over cocktail dresses had a funereal feel, and somehow the pompoms bouncing on scarves and bedecking caps failed to provide levity. The prevalent bangle shape: Teardrops.

THE LIGHTNESS OF CATE

Cate Blanchett looked relaxed in a red-and-white checked double-breasted Armani suit as she arrived to take her front row seat alongside Formula 1 driver Lewis Hamilton and Princess Charlene of Monaco.

"It's a beautiful sunny day, so I am wearing something light," Blanchett said. "I cannot wait to see the show."

Asked about the industry's moves toward sustainability, championed by the Italian Fashion Chamber, Blanchett responded: "It's the only way forward."

The fashion crowd eased into a day of shows Friday after a late night raising money for AIDS research at the annual amfAR Milan gala.

The amfAR foundation honored Angela Missoni for her contributions to the cause at the Thursday night gala, with tenor Andrea Bocelli entertaining the crowd with Elvis Presley's "Can't Help Falling in Love With You" in a duet with his wife Veronica Berti.

Bocelli also participated in the auction to raise funds for research, and will host two winning bidders and their guests at a concert and private dinner in Tuscany. The price tag for each package: 35,000 euros ($42,000) toward amfAR's goal of a cure for AIDS by 2020.

Champagne flowed into the wee hours with after-party music by DJs Dimitri from Paris and Johnny Dynell.