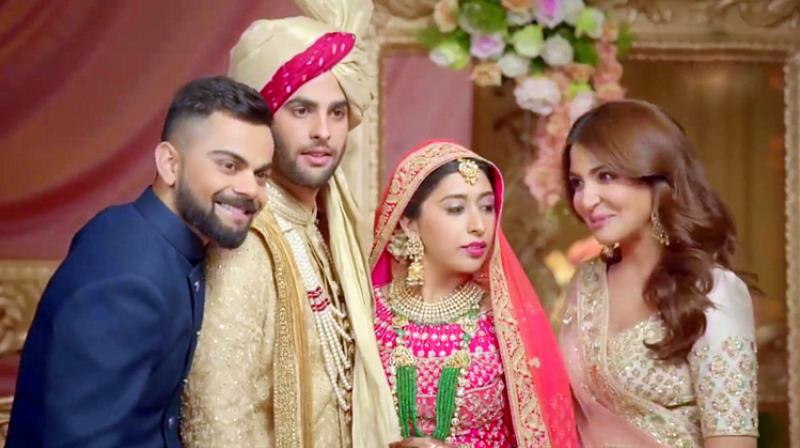 In the ad, Virushka leaves no stone unturned to warn their soon to be married friends about the realities of marriage.

Manyavar released a new advertisement, “Naye Rishtey, Naye Vaade- Hamesha” - taking forward the story of Virat Kohli and Anushka Sharma post marriage. It continues the playful romance of the pair at yet another yaar ki shaadi.

In the ad, Virushka leaves no stone unturned to warn their soon to be married friends about the realities of marriage.

Commenting on the campaign, Virat said, “I loved Manyavar’s unique collection for the season. There are lots of different hues and cuts in store this season. For myself, I chose a very stylish double breasted outfit with an asymmetrical cut. I think it made me look really suave.”

Adding to it, Anushka said “The youth will definitely resonate with it, especially young couples. Manyavar and Mohey have become brands that the youth have come to relate to. Their communication tends to be entertaining yet drives home a message which is extremely contemporary.”

The director of the ad, Shashank Khaitan, of Dhadak and Badrinath Ki Dulhaniya fame, said “I rarely take on ad film projects, but I was really excited at the prospect of working on Manyavar and Mohey. We wanted to continue the element of relatability of the ad, and with the right treatment of light-hearted banter the film beautifully focuses on love and happiness in spite of differences.”