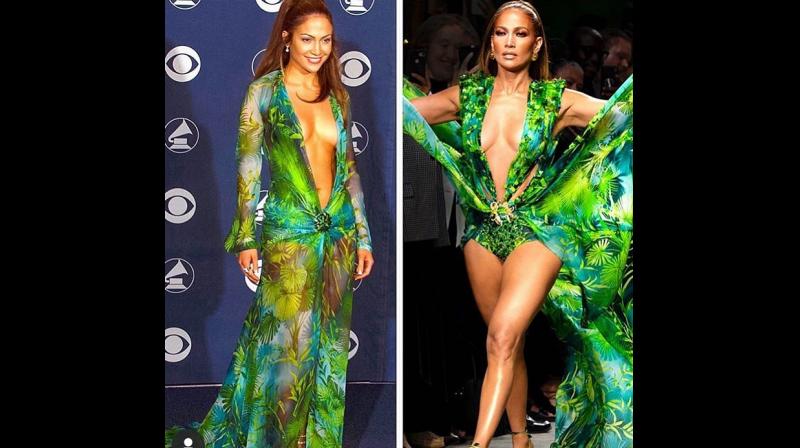 Milan: Pop star and actress Jennifer Lopez strutted down the Milan catwalk on Friday, closing the Versace fashion show in a recreation of the plunging jungle-themed gown she wore to the Grammy Awards nearly 20 years ago.

The 50-year-old joined models including sisters Gigi and Bella Hadid in the Milan Fashion Week presentation, walking the runway after a screen showed a Google voice search for the dress producing photos of Lopez in the frock at the 2000 Grammys.

Lopez modeled a newer version of the green dress, which at the time made headlines for its revealing low-cut front and skirt slits. She was later joined by designer Donatella Versace on the catwalk.

“For the Spring/Summer 2020 Collection, Versace honours an iconic moment when fashion and culture became a catalyst for technological progress,” the brand said. This time Lopez’s dress did not have sleeves but had more decorations and side slits.

In an April post on YouTube, Lopez said wearing the original dress was her “biggest fashion moment ever”, and that she had learned years later how so many people looking for it online helped inspire the creation of Google Images.

“So many people went searching for this,” she said.

The show marked the 20th anniversary of Versace’s jungle print, with models wearing tops, skirts, suits and dresses in its vivid green hues.

There were also sharply cut black dresses, jackets and coats, tye-dye designs and bursts of neon pink, green and orange for outerwear, frocks and shirts with voluminous sleeves.

Earlier, Italian designer Anna Molinari dedicated her latest Blumarine collection to kindness, a virtue that she said seemed “to belong to a time past”.

“This show celebrates an attitude of spontaneous, fresh sense of elegance - I have been inspired by the calm poetry of nature and by the ravishing world of flowers,” she said in show notes.

Molinari also presented five silk embroidered sweaters each spelling out the words “Sweetie”, “Cutie”, “Lovely”, “Smiley” and “Kind” that she said would go on sale on the brand’s site and at Blumarine’s Milan store after the show.

The designer wore a beige top with “Thank You” emblazoned on the front when she greeted the audience at the end of the show.

Bottega Veneta is known for its woven bags, and Lee used that technique for slip-on heel shoes. Bags were large and slung over the shoulder though some models carried small clutches.