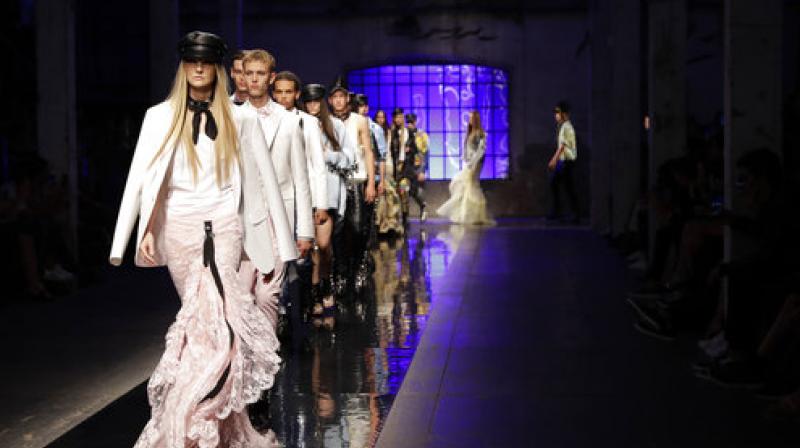 Miuccia Prada took inspiration from graphic novels for her latest collection, which aims to create a dialogue between the virtual world and the real world.

She employed two artists - James Jean from Los Angeles and Ollie Schrauwen of Belgium - to create graphic stories on a human and not superhero scale. They covered the walls of the showroom and became the prints that defined Sunday's menswear collection in Milan.

Scenes included a monkey with X-ray vision who it later turns out is mechanical and an oversized spider descending to pick up houses.

Nylon jumpsuits defined the Prada silhouette, belted at the waist and gathered at the ankles and cuffs with plastic Prada labels. Shirt collars were turned up. There was a shorts version worn with Prada men's knee socks and pointy leather shoes.

The silhouette was repeated in casualwear, with sweaters tucked into athletic-style trousers. Meshed sweaters of horizontal stripes tucked into houndstooth pattern trousers turned up into a thick cuff. Sandals with socks anchored those looks.

Graphic prints appeared in both pastel colors and black and white on shirts, jacket panels and bags. Prada said she added overcoats to unify the looks.

Guillaume Meilland's second collection for Ferragamo is inspired by the Mediterranean coastline shared by his native France and adopted Italy.

"Yes I like the idea of having, for me, something very Italian, something very much linked to the idea of the holidays and the seaside," Meilland said backstage. "Textures, colors, we are trying combine soft velvet, English fabrics and heavy linens ... The fluid and something more rough."

The looks combined for an effortless silhouette that Meilland said was inspired by the 1960 French film "Purple Noon," based on the Patricia Highsmith's "Ripley" novels.

Ferragamo's footwear included penny loafers or slip on moccasins with rubber soles adorned with the trademark buckle for the city or rope accents for the seaside.

Lee Wood laid the seams bare at Dirk Bikkembergs during his second season as its creative director.

The clean collection revealed the construction details that create rhythms with their repetition, from the patchwork trousers to the intarsia knitwear.

Wood said he was inspired by the brutalism architectural movement of the late 1960s and early 1970s that stood against adornment.

The lines were simple, with neat T-shirts with scooped necks paired with urban patchwork trousers cut from natural fabrics. The cuffs were turned up to reveal the rough seam. Heavy boots and utilitarian sandals anchored the looks.

Suit jackets were worn with shorts that were nearly bloomers in proportion, a fob to summer, while some trousers were festooned with maxi-pockets. Tops, by contrast, were soft, like one that was a patchwork of gold, light blue and white.

While the materials were mostly natural fibers and the color palette based on hues of blue, white and slate gray, the collection closed with flashes of green and Japanese technical fabric.

Korean designer Munsoo Kwon made his Milan debut in the Armani theater with a collection that contained some measure of autobiography.

The triptych collection includes pieces based on European tailoring, Korean military wear and a series of character looks. The thread that connects them all: The YOLO phenomenon, previously, before the invention of abbreviation-loving social media, known as "You Only Live Once."

The 37-year-old Kwon expresses his whimsy with out-of-proportion cuts: Boyish striped sweaters that are part of his character series are gigantic with wide, trailing arms, dwarfing the wearer.

The military looks are elongated and soft, not your usual regimented rendering. And the tailored outfits are clean and elegant, featuring pinstripe pants with long belts worn with a pajama-inspired top and a trench coat with bell sleeves