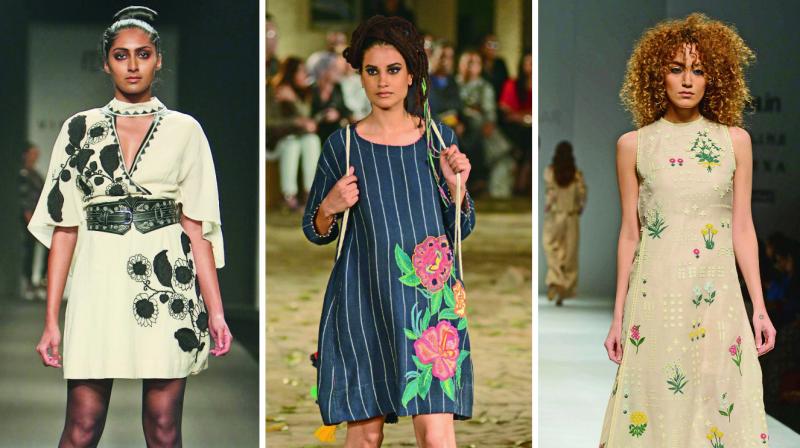 “Florals? For spring? How groundbreaking!” — Miranda Priestly famously rolled her eyes in The Devil Wears Prada. Well, she might have been right, but we are talking about florals for Fall. Yes, the dark days of winter will welcome a burst of soft, pretty blooms this year. At the ongoing Amazon India Fashion Week, designers Hemant and Nandita, Pankaj and Nidhi, Sahil Kochhar, Nikasha, Aneeth Arora among several others have been working florals into their structured cold-weather outfits. While florals have always been the darlings of fashion-verse, the key to a winter floral look, all of them say, is making sure it is “not too sweet.”

“Our collection was an ode to feminine power and what better way than florals to represent the same. Florals don’t always have to be girly and bright and they don’t have to be worn exclusively in spring and summer either,” share designer duo Hemant and Nandita.

Designer Schulen Fernandes, creative head at Wendell Rodricks who presented an entire line based on the rose and gave it a Cubist makeover, says, “In India, I believe, we all enjoy a certain femininity in our garments irrespective of the season. I took a cue from this idea and explored the beauty of the rose in our autumn-winter collection. We wanted to break the stereotype that florals are limited to prints and embroideries, and also the hot season. The Cubist Rose, that draws on the Cubist style of art, was in line with our philosophy of using geometry as our inspiration. Our most dramatic piece from the entire collection was the show-stopping blouse that had 302 fine seams resembling the multiple layers of a rose.” Some of the brand’s designs included jacket dresses, Cubist petal collars, 3D elevated leather cutwork, Harlequin technicolour blocking, angled silhouettes and hems.

Designer Sahil Kochhar’s autumn-winter edition drew inspiration from the meadows of Uttarakhand. His collection titled ‘Kyari’, a Hindi word meaning a flowerbed, was a celebration of the beauty of lush meadows dotted with a riot of wildflowers. The silhouettes brought out the contrast between the might of the peaks against the fragility of the flowers, offering a combination of structured shapes and delicate drapes. “I tried to simulate the beauty of the wildflowers through 3D cut embroideries and appliques,” said the designer.

Designer Nikasha, whose collection ‘Lilly’ had heavy floral references, was inspired by the Victorian era and Coromandel prints. She says, “The inspiration came to me from the place called Coromandel which was initially a Dutch settlement. We Indians were more familiar with roses and lotuses before the Dutch came and introduced different horticultural plants into our vocabulary. Florals are evergreen and my floral-inspired winter collection has a mix of colours like ivory, coral and tones of pink.” 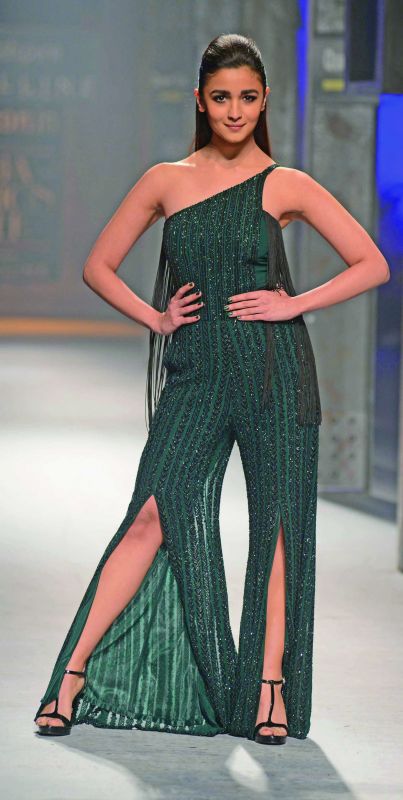 Fashionista Alia Bhatt, who was seen in the recently released Badrinath Ki Dulhania, has been praised for her sartorial choices. On Friday evening, the actress walked the ramp for designer Namrata Joshipura and spoke about her personal fashion preferences.

“I am a moody person,” said Alia, “Hence, my personal style totally relies on my moods. One day, I’ll be all over daisies and the next I’ll be all about grunge and everything that’s dark.”

Looking like a grunge-inspired fashion idol, this was the first time that Alia walked the ramp for Maybelline New York.