Designer Nikasha Tawadey strongly believes that inspiration grows inside you rather than coming up in intervals. 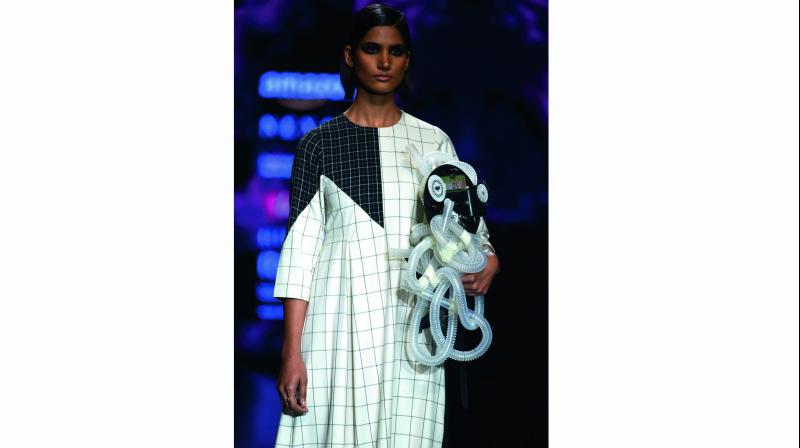 Nature, culture and traditions often becomes a source of inspiration for many, some go beyond and work on designs that highlight social issues. This season of Amazon Fashion Week, we saw designers paying homage to the #MeToo campaign and the horror of displacement amidst the growing violence.

“Any creative medium can be used to create awareness about social and moral issues. Fashion, like art is simply another medium of expression,” says designer Payal Jain.

“It is essential that designers use the platform to highlight the marginal part of the society — to get inspired by things around us like economic, social, political factors and to aspire to make a change,” says Saggar Mehra, creative director at Sunil Mehra.

Designer Nikasha Tawadey strongly believes that inspiration grows inside you rather than coming up in intervals. Her collection at the fashion week, titled, Keya (a monsoon flower) was an amalgamation of the Satyajit Ray’s Apu Trilogy which she wanted to recreate using the way nature comes alive after a shower. But it was the #MeToo movement which served her and boosted her further. Oprah Winfrey’s speech at the Golden Globes was the final nudge for Tawadey. “I wanted the clothes to be languid, free, celebrating this almost new era for women.” Using the monsoon as a metaphor for change, Tawadey’s collection celebrated the past and the future, the naivete and complex interplay of it all.

Tawadey’s models walked down the ramp dawning fluid silhouette like dhoti sari’s complimenting the brocade cocktail jackets, heavy floral prints in bright hues, depicted the woman of change. “I, in my own small way, tried to celebrate women.”

Designer Nitin Bal Chauhan, known to challenge himself came up with a collection addressed immigration crisis in the world politics. “The collection was inspired by pain and misery around the world — be it Syria, Africa or our country. I used fabrics, oversized garments making them asymmetric, gathering them in a way that engulfs certain feelings”, leaving the audience something to ponder upon. Displaced seam lines, shifted pockets and plackets, oversized clothes that have been made to fit a smaller size, translate to express the emotions of the millions of homeless people, their displaced lives and a yearning for comfort. Thus, his collection was a glimpse into the refugee camps, misplaced and shattered.

In such cases, while the garments do a lot of talking, accessories like headgear, tassels and others often enhance the dramatic effect. Chauhan too used headgears very dominantly in his collection to highlight the issue of human displacement. “I feel headgears give a deeper glimpse into one’s inspiration. In my collection, if I normally present my feelings you’ll miss the point. So, I think headgear adds more emotions and sensitise people about the plight of refugees when they move to places where people are settled in communities.”

Jain agrees which Chauhan, as she adds, “Accessories can enhance and endorse the message being conveyed through the collection. They can be used as a strong visual tool.”

However, the challenge lies in making the outfits wearable. “Fashion needs to be commercially accepted, practical and wearable at the end of the day. A designer’s expression of a cause, close to them, can be interpreted through colour, texture, treatment, embellishment and accessories; keeping silhouettes wearable and practical. However, this is very personal and according to the aesthetics and design sensibility of the designer,” Jain concludes.