School, however, proved tough for him but his belief in himself and being academically strong helped him sail through successfully. 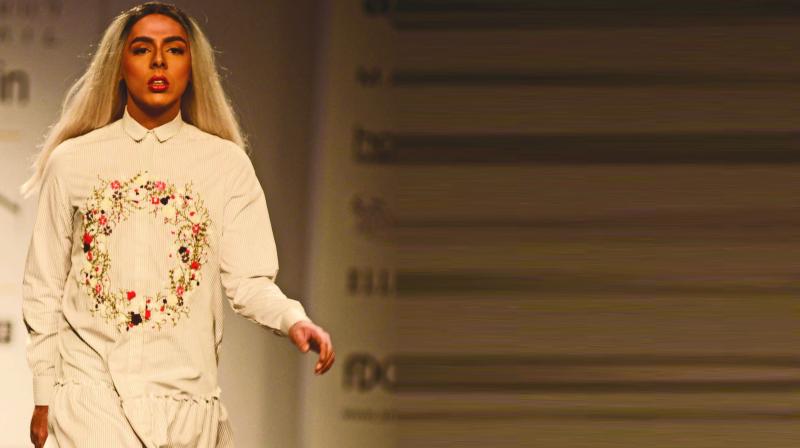 For a young man transitioning into a woman, Taksh Sharma believes in embracing the self and being comfortable in one’s skin. Taksh, who walked the ramp for designer duo Pranav Mishra and Shyma Reddy of the brand Huemn, talks to us about embracing sexuality, inclusive fashion and walking the ramp for the first time at the Amazon India fashion week.

From an early age, embracing the self was important for Taksh, and it was an organic process. “I was an effeminate kid since childhood. All my life I knew I am different from people around me. When I was very young my parents gave me the space to be weird and silly and let my vivid imagination run free. I would often play dress up and do characters, wearing my aunt’s nighties or ma’s heels. It was probably my happiest memory — no stereotypes — playtime was playtime. They understood it and home was my haven,” recalls 21-year-old Taksh.

School, however, proved tough for him but his belief in himself and being academically strong helped him sail through successfully. “What got me through was my belief in myself — that I was not the one in the wrong. I guess those formative years were crucial in making me the strong-willed person I am today. I chalked it up to the inability of others to process something they weren’t familiar with. My teens were tumultuous and I was a punk rock rebellious kid from the jump. The thing was I was an ace student in school, so on paper no one could touch me. All through this time I was active in activist forums online. I came across so much feminist literature, self-care tips, entire guidebooks that helped me diffuse a lot of arguments at home and also inform my parents.”

Talking about his ongoing transformation into a woman and his family’s reaction to it, he says, “My life and family may not be perfect, but very soon, my body is going to change and I know I have a solid support system to overcome any peripheral conflict that makes the transition easier compared to most people. I am honestly blessed with parents who, while they aren’t exactly liberal or progressive, love me so fiercely that they have let that love guide them and mould their way of thinking. As I grow, my parents grow with me, that’s the beauty of it.”

Clothes designed for no particular gender got Taksh excited about walking the ramp, “What I liked about the collection presented by Huemn was that it truly represents and celebrates inclusive fashion effortlessly. It recognised people like me who like dressing up without making a huge issue about it. The gender neutral collection paid a tribute to the individual. They didn’t care if you are transgender, lesbian, gay or straight. The collection catered to all as same. The collection also tried to touch upon the political ambience of our times. ”

A freelance fashion stylist, Taksh shares that the Huemn team approached him for their campaign about finding a common ground in diversity before asking him to walk the ramp for them. “The campaign was about embracing everyone through fashion. They found me through Facebook, where they saw me modelling for a magazine. The concept was interesting and I said yes to them. That association translated into getting an opportunity to walk the ramp. And the best part was we were asked to be the people that we are.”