With so many Europeans living and working in British fashion, their status after Brexit has been a priority for many brands and designers. 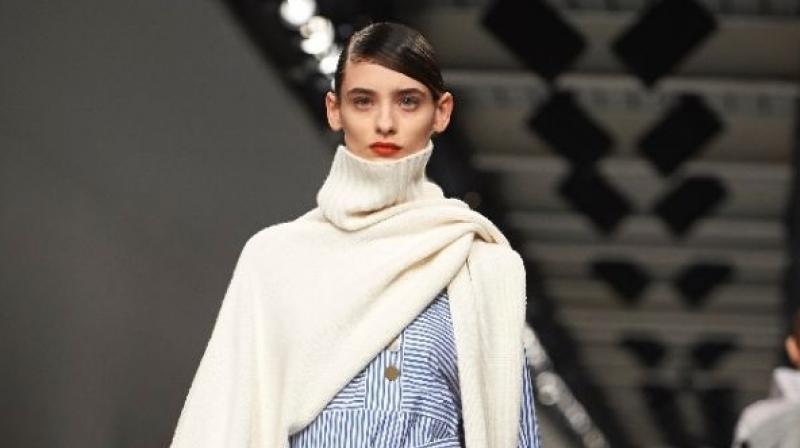 Models present creations by South Korean designer Eudon Choi during his catwalk show on the first day of the Autumn/Winter 2017 London Fashion Week in London on February 17, 2017. (Photo: AFP)

London: The British fashion industry kicked off its seasonal showcase today urging the government not to damage a thriving sector by cutting immigration and trade ties with the EU after Brexit.

"Fashion week is a really great time to understand the power and influence of our industry, as well as our creativity," said Caroline Rush, chief executive of the
British Fashion Council (BFC). "We hope that you'll listen as we talk to you about visas, about talent, about tariffs, about frictionless borders, and around IP (intellectual property).

"Because this is incredibly important to sustain this incredible industry, that contributes USD 34.8 billion to the British economy and provides 880,000 jobs." Prime Minister Theresa May is due to start negotiations on leaving the European Union within weeks, and has already signalled her intention to impose controls on EU migrants coming to work in Britain.

She has said this would likely come at the cost of leaving Europe's single market -- a major concern for the fashion industry, as the bloc accounts for about 70 per cent of British textiles and apparel exports. Over the next five days, London Fashion Week will showcase collections by more than 80 designers and brands, from Versace's Versus to Burberry, JW Anderson, Christopher Kane, Roksanda, and Mulberry.

But amid the glamour and the creativity, there is unease about what the future holds. "The overarching feeling at the moment is uncertainty," said Adam Mansell, chief executive of the UK Fashion and Textile Association. Access to the EU's single market is a key issue for the industry, but there are other concerns, such as the skilled labour used in British manufacturing, as well as trade ties
with the rest of the world.

Mansell noted that British fashion is heavily dependent on imports, particularly large volumes of clothes made in Bangladesh, Pakistan, Myanmar and Turkey -- all currently tariff-free through EU-negotiated trade deals which must now be replaced. While there has been a resurgence in UK manufacturing over the past couple of years, with many high-end brands benefiting from the allure of British heritage, they are often staffed by skilled workers from the EU.

"A lot of the product that you'll see on the catwalk in the next few days is actually made in London. And I know several factories in London where the workforce is more than 70 per cent EU," Mansell told AFP. With so many Europeans living and working in British fashion, their status after Brexit has been a priority for many brands and designers, and industry bodies have petitioned ministers to guarantee their right to stay.