The embellishments were derived from the past, which Anand reinvented onto his ensembles. 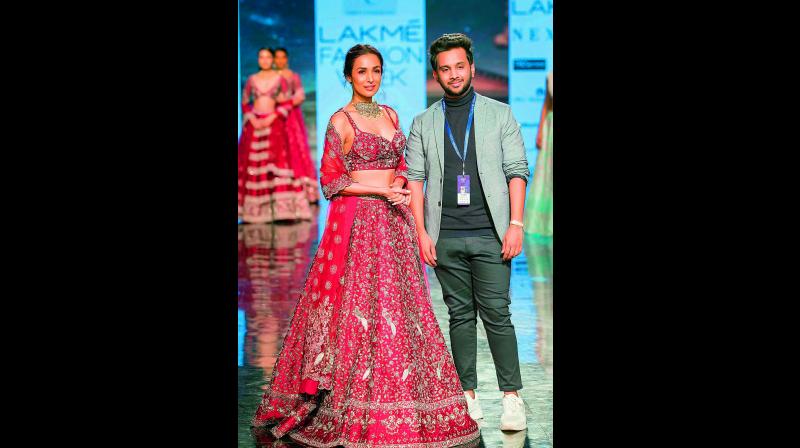 Hyderabad-based designers, veteran Anand Kabra and debutante Varun Chakkilam keeps the flag flying for the city as they showcase their exclusive collection at the LFW Summer/Resort 2020.

Malaika Arora stunned one and all as she walked down the runway at Lakmé Fashion Week Summer/Resort 2020 as the showstopper for designer Hyderabad-based designer Varun Chakkilam, who is making his debut this year at the prestigious event. Malaika sported a dazzling red outfit comprising of a lovely blouse with a bustier and a long, flowy skirt. “The duppatta was draped like a cape. It took almost three months to finish the garment which is handcrafted with sequins, pearls and glass beads. The colour was apt as it's the colour of love. She looked like a dream when she dazzled the ramp,” says the young designer. Varun’s Utopian Dream collection draws a parodox between tailored elegance and decandant glamour. “The spring summer collection —Utopian Dream — is inspired by the poem by Julia Mainwaring-Berry. The collection suggests that nobility is first and foremost a way of envisaging the world  and the very notion of elegance with equal parts of power and delicacy. It's so simple and yet so powerful and enticing,” says Varun.

When asked why did he chose to put his clothes on Malaika, he says, “Malaika is one of the most beautiful actresses in Bollywood. She carries herself with great panache.”

Hyderabad-based designer Anand Kabra, who is known for his modern-meets-traditional take on clothing, used his creations as a canvas for his rich heritage and traditional embroidery of Hyderabad. A lover of Japanese floral and pietre dura art, Anand brought them on his chosen colour palette that moved beautifully from ivory and turmeric to vermillion and black.

The embellishments were derived from the past, which Anand reinvented onto his ensembles. There was the glitter of beaten metallic thread and wire embroidery in the form of pitta. Also, on the ramp was the shimmer of sitara—sequins and the intricate resham thread work. The ever popular zardosi embroidery was layered perfectly to form 3D surfaces and the traditional nag or crystals were incorporated to create a luxurious jeweled ornamentation. The colour story also revolved around black and ivory, with occasional pops of red, haldi and green. The designer's signature colour palette effortlessly flattered the Indian skin tones. Adding an edge to the collection, was a black dress with thigh-high, side slits, covered in multi-hued sequins forming sharp floral motifs.