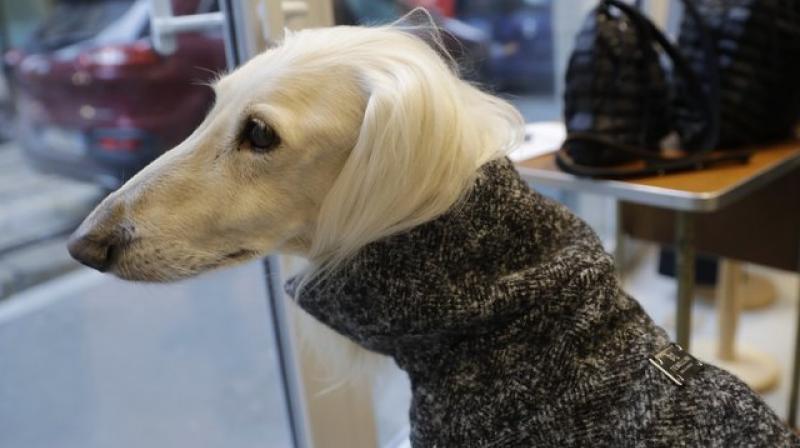 Milan has long been the world’s ready-to-wear fashion leader. Now, dogs are getting in on the Italian city’s sartorial scene with a new line of haute couture for canines.

The capes cost 170 euros ($208) and synthetically filled hooded parkas go for 210 euros ($256) to reflect the extra time it takes to get the fine stitching on the elasticized sleeves just right.

Designer Giovanna Temellini says fashionable dog clothes aren’t just an indulgence. Her luxury outerwear not only protects pooches accustomed to being indoors when they are brought outside, but take into account the builds of various types of dogs, she said.

“For me, a dog is well-dressed only when it has freedom of movement, when it is not constrained,” Temellini said. “It is OK to dress a dog when it is cold, but a dog needs to live his live as a dog. This is important.”

Speaking from personal experience, the designer notes that Ulysses, her long-haired Afghan Hound, requires five hours of grooming if he gets wet in the rain. A raincoat prevents the hassle, she said.

Temellini launched Dog a Porter a year ago alongside her 20-year-old eponymous clothing line for women. She opened a boutique in Milan’s chic Brera neighborhood this week, selling women’s ready-to-wear and canine couture side-by-side.

In fact, many of the dog garments have corresponding numbers for women, such as the long, flowing black cotton skirt a pet owner could wear while walking her dog outfitted in a black chenille jacket.

The market appears ripe for such a venture in fashion-conscious Italy, where some 7 million dogs are registered as pets, or one for every 3.7 families, according to statistics from ASSALCO, an association of producers of pet food and other pet items.

Temellini said the toughest part about designing for dogs was the sizing. The long bodies and stout thoraxes of dachshunds, for example, had to be taken into account. In all, the Dog a Porter line has five basic shapes.

But the Temellini atelier also does made-to-order items, applying the experience it gained over decades making samples for some of Milan’s top fashion houses, including Ermanno Scervino, Bottega Veneta and Max Mara.

Patrizia Radaelli is a happy Dog a Porter customer. She couldn’t find anything to warm Eddie, her 14-year-old Yorkshire terrier-Volpino Italiano mix.

“He’s a little old and gets very cold in the winter,” Radaelli said. “Usually, he would get very fussy when I dressed him with other items. But never with Giovanna’s fabrics.”

Now, Eddie turns heads when he does his evening business wearing a striped cashmere sweater under a navy blue parka, Radaelli said.