Known as the fabric of India, this age-old fabric has undergone significant changes to make it a part of the contemporary fashion world. 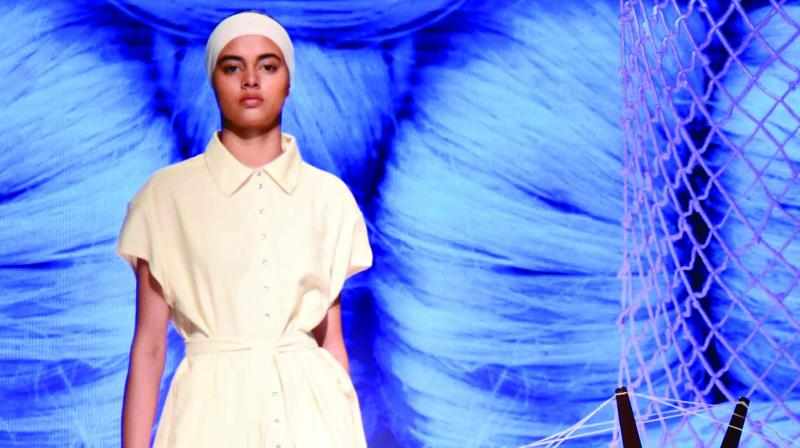 Images for representational purposes only.

Khadi became an important part of the freedom struggle after Mahatma Gandhi championed its use during the Swadeshi movement. Foreign goods were boycotted, while the use of homegrown, homespun products was championed. Today, almost 100 years later, Khadi continues to be the pride of our country.

Since the fabric is created by yarn spun by hand, it has a rough texture. While some would find this inconvenient, veteran designer Ritu Kumar feels nothing but pride for the fabric. She says, “The yarn itself is spun by hand, mostly by a woman and on a charkha. This gives it an uneven quality. When it’s woven in a handloom, the fabric gets a non-regimented, rough, rustic texture, which cannot be achieved by any other country or any other place unless they go through the handspun process.”

As the fashion industry looks for sustainable options, Khadi is quickly becoming a sought-after favourite. “Not only the quality of Khadi, but also the fact that we are the only country that produces this amazingly versatile fabric which is eco-friendly, doesn’t pollute the atmosphere and is made in rural areas without electricity, adds to its appeal,” says the designer.

Although an indigenous industry, Khadi making has undergone a significant amount of changes over the years, as there has been a reduction in the number of people working in the industry. Also, because most of the fabric is handmade, there are inconsistencies in the quality and production speed of the fabric. Hence, the industry was forced to innovate. Yash Arya, founder of I Am Khadi says, “Since PM Narendra Modi started promoting Khadi globally, the demand has increased. So now, the production has become a challenge. In order to overcome the challenge, a new kind of Khadi has come into the market called ‘Poly Khadi’. In this, an alternate thread is used, one made by the machine and one woven by hand and the hand to machine ratio is 66:33. It is made in the handloom itself. And the benefit of Poly Khadi is that it is more uniform, has better strength, is more sanitized and the quality is also superior.”

According to Yash, the demand for Khadi globally is around $4-5 billion and the major countries buying the fabric are Japan, Europe, US and UK, where it is used for furnishing as well as garment making. Ritu Kumar believes that the designing has to be simple when making garments out of Khadi. She says, “Traditionally, it’s always been designed as an unstitched garment, like a saree, dhoti or pagdi, but the important thing is to keep the garment simple, like a straight kurta, pajamas, dupatta, saris, bandi, or khadi cap. Khadi does lend itself to draping, so it’s good for sarees, but it could also be fashioned into wonderful gowns, which are very rustic.”

Designer Pallavi Dhyani believes that Khadi needs to be fashioned into garments that suit contemporary sensibilities. She says, “I think we need to work on the kind of silhouettes and garments that are available, because according to me, Khadi can be used in a very modern way. The silhouettes should not be restricted to kurtas and Nehru jackets, but should be expanded to contemporary wear so that modern men and women can make the garments a part of their everyday wardrobe.”

Pallavi, who will be participating in the Lakme Fashion Week in collaboration with Khadi and Village Industries Commission, is excited to showcase her work. “I love Khadi because of multiple reasons; firstly, the process makes it so unique, it’s so intricate that you can actually visualise the entire process of how and where this fabric is coming from. Apart from that, it is eco-friendly, light and airy and ideal for tropical weather. So it works beautifully,” she adds.

Another innovation in the Khadi industry has been the introduction of the New Model Charkha (NMC) with eight to 16 spindles. Yash believes that this new introduction is making weavers’ lives easier. He says, “The original NMC is operated by hand. Now it has been innovated on and a motor, which works on solar energy, has been fitted. When weaving with a hand NMC, the quantity produced is much less than when weaving with a solar-powered NMC, because there is a human factor involved in the former. One person cannot work for hours without a break. Also, the women who are making this fabric are in the age group of 35-40 years, because the younger generation isn’t joining this industry. At this that age, their capacity for spinning and weaving is diminished, which in turns affects the thread count of the product.” With the introduction of solar-powered charkhas, the production has gone up from 8 to 16%.

Ritu Kumar believes that if popularised, the Khadi industry can create more employment opportunities for the poor. “The thing is that we aren’t producing as much Khadi as we want in the country. The government has to initiate more sources of income because this gives work to the poor in villages. Our country too can use more Khadi, as it’s the biggest consumer of fabrics in the world,” she concludes.