Young girl with two amputations walks the ramp at NYFW 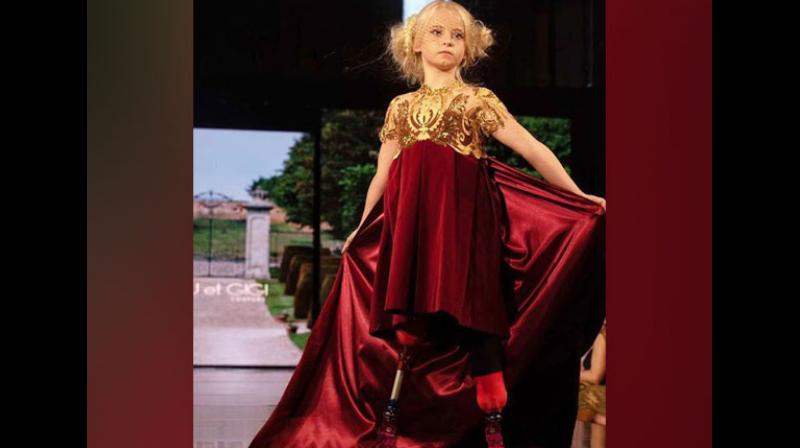 Washington: A young girl just proved that disability cannot stop anyone from achieving their dreams as the nine-year-old double-amputee stole the show at the New York Fashion Week (NYFW) runway.

Daisy-May Demetre, the 9-year-old model, made her much-awaited debut at the big fashion night recently, becoming the first-ever double-amputee to walk a Big Apple show, Pix11 reported, as cited by New York Post.

Demetre, a resident of Birmingham, United Kingdom, made heads turn as she strutted down the runway for Lulu et Gigi Couture of France, which specialises in French-inspired luxury fashion for children.

"I feel proud of myself," Demetre said of her journey, the report stated.

The young model's father also spoke about his daughter's record-breaking step to hit the catwalk, inspiring many people with disabilities.

"She walked it like a professional and had fun doing it," her father Alex Demetre said, who always encouraged her to follow her dreams.

Demetre was born with fibular hemimelia, a rare birth defect in which part or all of the fibular bone is missing. As a result of the rare defect, she got both her legs amputated when she was just 18 months old.

The nine-year-old model now uses prosthetic limbs to move and walk around.

Her life took a turn when she was watching TV with her father one day. "It just so happened on the TV pops up a disabled modelling agency," the doting dad told CBS News. He asked Demetre if she wanted to be a supermodel, to which she replied "yes."

From there, the young model's career took off and then there was no turning back. She modelled for brands Nike and River Island along with other U.K. companies. The nine-year-old also took the internet by storm with a cartwheel on the catwalk at London kids fashion week in April, as seen in a video posted by Demetre's father, who runs her Instagram account.

"She inspired me by showing me who she was," her father told CNN.

"She takes on life with a smile on her face, and she does remarkable things. Whether it's dancing, singing, she is a very special little girl," he added.

The young model is now a brand ambassador for Lulu et Gigi Couture of France, a position she landed due to her "instant connection" with designer Eniko Hegedus-Buiron.

Demetre will also walk the runway for Lulu et Gigi Couture again later this month during Paris Fashion Week, where she will appear at the top of the Eiffel Tower.