Too much of a coincidence

A Mumbai-based celebrity stylist (who prefers being anonymous) calls it a very common practice in the industry. 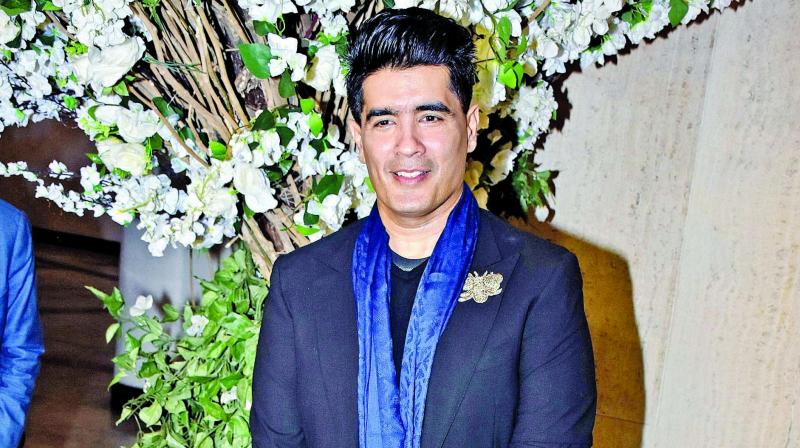 To be fair, Manish Malhotra had designed these saris earlier, with many other stars wearing them in different colours.

India’s top designers Sabyasachi Mukherjee and Manish Malhotra design identical saris worn by actors Deepika Padukone and Kajol respectively! Had it been the case with small-time designers, definitely one of them would have been called out for ‘copying’.

Bollywood and fashion go hand-in-hand in India. When top actresses endorse a designer label, the brand value of the design house automatically goes up. Designers chase celebrity stylists to dress up top actors in their designs as it gets them great mileage. However, the biggest snafu happens when celebrities end up wearing very similar outfits. One wonders how their stylists let this faux pas happen.

Actors Deepika Padukone and Kajol, were spotted wearing almost identical midnight blue sequined saris at their respective film promotion events! Was it too much of a coincidence that Deepika’s sari by designer Sabyasachi Mukherjee and Kajol’s outfit by Manish Malhotra were so similar?

To be fair, Manish Malhotra had designed these saris earlier, with many other stars wearing them in different colours. In fact Kajol wore the sari first. Deepika’s Sabyasachi sari was in fact a first-of-its-kind by the designer. He hasn’t done sequined saris ever before. Which is why eyebrows are being raised. How did Deepika’s stylist miss it?

A Mumbai-based celebrity stylist (who prefers being anonymous) calls it a very common practice in the industry. “Every designer in India deals in this fabric and they just replace the tag by putting their label. Saris like these are no-brainer; if you look at the sequin work – it’s all machine work and there is no design element in this. One can give credit to the styling team for some tweak in both the looks, but overall it’s not a case of copy-paste.”

Remarks designer Poornima Vardhan of the label 355th, this is entrenched in the entire ecosystem of the Indian design fraternity, She says, “The bigger problem lies in how easy it is to copy and get away with it.

I, personally remember a runway collection of a leading Indian designer highly influenced by Gucci and the entire media swooning over it, writing rave reviews without anyone pointing the obvious. The design stores stock the same collection; with PR push the celebrities wear the same copied designs. So in a way we are all complicit in this crime. Creating an original piece of work is a time consuming and expensive proposition, thus, several designers take the easy path to lift off existing designs and get by.”

Whereas jewellery designer of Aayushi Jain believes that fashion plagiarism is an important issue, but many have started to use this term frivolously. With so many trends easily accessible to the mass, it becomes easy to claim that one has copied the other. She says, “If a simple thing like sequin is trending and two designers indulge in this, it doesn’t make either of them copy-cats. It makes them trendy and fashionable. For example, most diamond jewellery is white, that doesn’t make them all the same. Similarly a sari — a classic design — is made by many designers, where some thoughts will overlap and one should appreciate the beauty rather than ridicule their hard work.”

The Indian sari is one of the sexiest drapes, and undoubtedly celebrities and our designers love it equally. To blame established designers for ‘lifting’ the idea might seem a bit extreme, and being in the same industry it is quite common for people to use similar patterns, embroideries, embellishments, colours, and fabrics. Fashion expert and image consultant Renu Mehra says, “Bling or sequins in monochromes are always in fashion, for example, in this case, the similar-looking saris by two famous designers. Classic blue is the colour of the year, and maybe both the designers thought of a similar colour palette and designed it. I feel that it is just a case of two equally strong influencers coming up with a thoughtfully cultivated trend, fully aware of its impact among followers.”