Sneakers filled with sacred water sell out in minutes

Holy shoe! Nike’s Air Max shoes worth USD 3000 have been filled with holy water from the Jordan River. 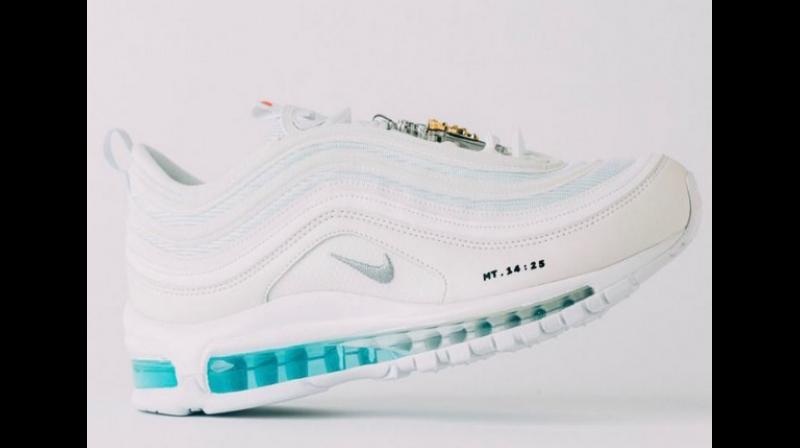 A closer look at the shoe and the river's water can be seen floating in the sole. (Photo: ANI)

Washington: When Jesus blesses a shoe, it gets sold out in minutes! A one of its kind limited-edition holy water-filled sneakers went out of stock within a few minutes of sell and that too at a colossal sum of USD 3,000.

The distinctive pair of white Nike Air Max 97s termed 'Jesus Shoes' are manufactured by a Brooklyn-based creative label MSCHF and the USP of the shoe is that it was injected with holy water from the Jordan River, reported Fox News.

A closer look at the shoe and the river's water can be seen floating in the sole.

If you think that it's only the holy water that soared up the price tag, then take a look at another feature of the kicks. The shoes also have the Bible verse Matthew 14:25 -- the passage describing Jesus walking on water -- at the side of the show along with a single blood drop to represent the blood of Christ.

Some other religious insights include the frankincense-scented insoles, a crucifix threaded through the laces, and a red sole, which references the red shoes traditionally worn by past Popes.

When the shoe is religious, so has to its package! The shoebox also displays an angel and a seal resembling the official papal seal.

"We thought of that Arizona Iced Tea and Adidas collab, where they were selling shoes that [advertised] a beverage company that sells iced tea at bodegas," Fox News quoted the head of commerce Daniel Greenberg as telling the New York Post.

"So we wanted to make a statement about how absurd collab culture has gotten," he added.

However, Greenberg experimented with less than a dozen such pairs, he added that they were made with no plans to create more.

Although, Gabriel Whaley, founder of the brand, hinted there may be a "second coming" in the future.