While some feel that five per cent tax is a nominal amount, others feel that it going to have an adverse affect on khadi weavers. 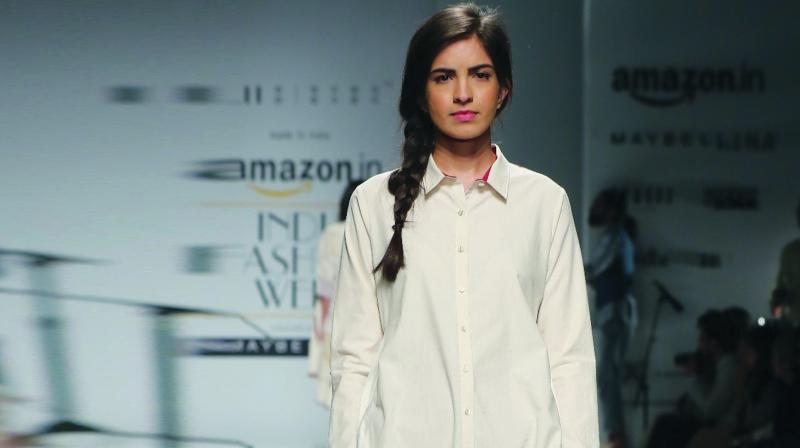 While designers agree with the imposition of GST as the way forward, they are not in favour of a fabric like khadi being taxed.

Khadi being taxed under the new GST regime has garnered a mixed bag of responses from the fashion fraternity. While some feel that five per cent tax is a nominal amount, others feel that it going to have an adverse affect on khadi weavers.

While handloom and textiles are already considered expensive and are often helmed as “luxury clothing”, putting a tax on khadi — which is a handwoven and handspun fabric — has disappointed the fashion fraternity. With the announcement of the Goods and Services Tax (GST), a five per cent GST has been imposed on khadi cloth, 12 per cent GST on the sale and purchase of readymade khadi products above `1,000, and 18 per cent GST on poly cloth of khadi (polyester khadi mix cloth).

While designers agree with the imposition of GST as the way forward, they are not in favour of a fabric like khadi being taxed.

Designer Madhu Jain, known to be one of the ace textile revivalists of the country, feels that putting a tax khadi would eventually make weavers shift to other means of employment. “In the past 30 years of my experience of visiting the interiors of India, I have regularly seen and experienced that our weavers are horrified because of poor living conditions. The gen-next of weavers don’t want to carry on the work of their forefathers, and are trying to shift towards more lucrative career options,” says Madhu while adding, “When I was travelling to south India last time, I was shocked to discover that my driver was an ex-weaver.”

According to fashion designer Rahul Mishra, instead of putting a tax on khadi, the government should work on providing khadi weavers with a proper certification — which is issued from the manufacturer’s side — so that it benefits weavers.

“It would have been nicer if khadi was out of taxation. Khadi benefits India’s village economy. Many a times, powerlooms are passed on as handlooms and the benefits which were supposed to be allocated to handlooms alone, are also allocated to powerlooms. Similar is the case with khadi. Khadi has to be handspun and handwoven. Post production, there’s no way of checking if the process is mechanised or worked on with hand. Hence, on the production level, if the manufacturers can issue certificate to handwoven khadi, it would really benefit the weavers,” says Rahul.

Sunil Sethi, president, Fashion Design Council of India, feels that while GST is a “step in the right direction”, khadi and handloom textiles should not be taxed.

“Unless these fabrics gain everyone’s attention and become commercially successful, taxing them is not favourable. Right now, we are struggling to promote khadi and handlooms on a large scale. So in the domestic market, I feel that it is better to put it outside the purview of GST,” says Sunil.

However, designer Samant Chauhan feels that in the past few years, khadi has been portrayed as a luxury fabric and thus five per cent tax is a very nominal amount. “The whole concept of khadi has changed. With respect to the kind of khadi that a few brands are selling, khadi has actually been portrayed as a luxury fabric. Five per cent tax will hardly affect weavers or  consumers,” says Samant.