Lady with a lovely lehenga

Being two creative souls, one would assume they met over a fashion pop-up somewhere. 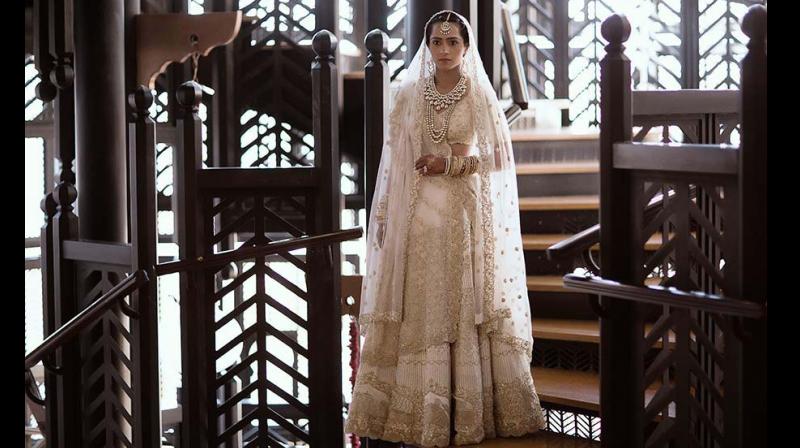 Kresha Bajaj in her own ‘love’ woven wedding lehenga

Her wedding lehenga had a love story woven into it. And now, Kresha Bajaj who has designed Telugu star, Samantha Ruth Prabhu’s wedding outfit talks about her journey so far.

She’s a fashion designer who married a jeweller. They both hail from Mumbai’s socially prominent families. Kresha is the daughter of Kishore Bajaj, a name synonymous with the hospitality industry. Her husband Vanraj comes from the prestigious House of Zaveris. Being two creative souls, one would assume they met over a fashion pop-up somewhere. But fate dictated otherwise.

“We connected ‘coz of our love for animals. Vanraj is a certified dive master. I watched a documentary called Cove which depicted how in Taiji, Japan, a large number of dolphins are captured to be placed in water parks. The remaining are killed for consumption. It is common to eat whale meat in Japan, and often times, dolphin meat is passed off as whale meat. Dolphin meat has high levels of mercury and causes mercury poisoning. After I saw this documentary, I couldn’t sleep for nights, and I did some research, contacted Richard O Barry, the founder of the Dolphin Projection. I decided to have a protest on Japan’s dolphin slaughter day in Mumbai. I was at a friend’s party and didn’t know anyone there and that’s where I bumped into Vanraj. We got chatting, and I told him about my plans. He is also passionate about animals and instantly wanted to join me on this protest,” she recollects in a telephonic chat from Mumbai.

The couple, who tied the knot in 2016, decided to put their creative synergies to good use as they organised a joint pop-up in April this year. “I had brides coming to me for offbeat designs, and they were very clear they didn’t want the regular polki and diamond wedding jewellery. I would show them my wedding jewellery which was designed by Vanraj and they loved it. Likewise, Vanraj would refer his bridal clients to me, so it became inevitable for us to work together,” recounts Kresha, whose name incidentally doesn’t have a meaning. “It is just something my parents made up,” she says a tad amused.

Kresha has recently taken over her dad Kishore Bajaj’s men’s line too, and fondly narrates the life altering advice he gave her. “He told me that I should be the best in whatever I choose to do. He started young and didn’t get through college. He faced a lot of challenges in his business because he was dependent on other people. So when I decided to get into fashion, he told me you must learn to make the pattern, cut and stitch the outfit, learn to market the product and manage the business yourself. Otherwise you are better off working for someone. That’s why I spent eight years studying fashion. I spent three years at the London College of Fashion, and then I did a year at Parsons Institute, NYC and followed it by another stint at the Los Angeles Fashion Institute of Design. I can handle everything. Today, if my karigars leave, I can simply take over from them. I’m not fully dependant on anyone,” she asserts.

Kresha was recently in the news for having designed the wedding outfits of Telugu star Samantha Ruth Prabhu. The actress had stated that she had blind faith in Kresha. It appears to be a mutal admiration society as Kresha adds, “Samantha is a good friend, we are like two peas in a pod, exactly the same kind of aesthetic… The designing happened organically and it was a fuss free experience. Working with brides can be a nightmare, but I have become patient over time,” says the 29-year-old designer who has a soft spot for her love story lehengas inspired by her own wedding lehenga. “There are dolphins jumping up and down on the hem of my lehenga and it took me three months to design as I wove my love story into it,” she says.

Besides her passion for designing, Kresha loves to spend time with her hubby and her dog. The young couple loves to take off on diving holidays in exotic locations. “We went to Maldives for our anniversary and lived on a small boat. All we did was wake up, dive, have breakfast, dive, have lunch, dive, and sometimes even did night diving. Next, we plan to go to Raja Ampat, a diving island in Indonesia,” she adds.