Today’s fashion is not just about being pretty. Instead, clothes carry a deeper message and often make a statement about trendy issues. 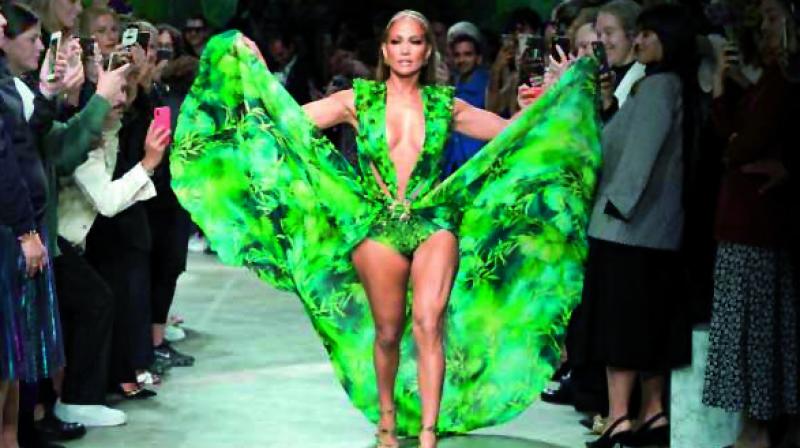 Designer Donatella Versace got 50-year-old diva JLo to walk the runway at the Spring/Summer 2020 Versace show in a revamped version of her famous 2000 Grammy dress.

Sustainability and inclusivity are the two new buzzwords in the fashion industry today, with many iconic brands and retailers showing the way forward. As global citizens, we must keep the ecological integrity of the environment in mind — not only with the making of the clothes, but also with regards to the interdependent social, cultural, ecological and financial systems.

Designer Sabyasachi, who is considered a genius by all the society matrons and influencers, supports this cause. So does fashion queen Anita Dongre who has created a sustainable clothing label named Grassroot.

Inclusivity is yet another mammoth discussion in the fashion space today. Buyers can no longer be stereotyped. The advent of social media such as Instagram, accessibility to the Internet and a heavy dose of fashion forward KJo popcorn glam movies along with reality shows like Keeping Up with the Kardashians has opened up the world of fashion to virtually everyone.

Sudanese-Australian model Adut Akech, who was initially a refugee, recently received the Brit Fashion award, proving that dreams really do come true. Not only was she Karl Lagerfeld’s muse, she was also the second ever model of colour who closed the Chanel show in 2018.

Today’s world offers ample opportunities. Plus-size model Ashley Graham has made her mark and is one of the highest paid models today. Another stunner is Winnie Harlow, who has used her skin condition Vitiligo to her advantage and got selected to walk the last Victoria’s Secret show. And who would have ever thought that Nike would introduce plus-size mannequins to their marketing campaign? But it was there for all to see at their London store this June.

Rihanna is yet another star who introduced a makeup line Fenty Beauty to cater to all skin types. Similarly, YouTube star Jeffree Star is also a cool cat who is incredibly successful in the beauty business. Today, he shades Kylie Jenner whenever he feels that her products are misleading and guess what, his opinion matters!

And who can forget designer Donatella Versace, who got 50-year-old diva JLo to strut the runway at the Spring/Summer 2020 Versace show? Rather than picking a top contemporary model, the designer picked JLo, who wore a revamped version of her 2000 Grammy dress, which featured a memorable green palm trees print. It was a look that became iconic in fashion history. Naturally, JLo caught everyone’s attention, and proved that even at 50, she’s hot!

Brands like Tommy Hilfiger and giant e-commerce ASOS, have become more sensitive to differently-abled people, especially wheelchair users (think waterproof, versatile and with a longer hem at the back). US label Hilfiger recently unveiled a disability-friendly line named Tommy Adaptive, which includes a range of pieces crafted with adjustable details and easy-use fastenings.

Celebrated designer Pranay Baidya, who has successfully brought prominence to Bengali culture and aesthetics through his gorgeous weaves, says, “One of the defining trends of 2020 would definitely be the continued evolution of androgyny, both in terms of garment silhouettes breaking the wall between traditional gender binding dress forms and also fusing a more inclusive mood in terms of the general ideology behind its design, prints, colours, surface ornamentation, etc. In fact, our range of menswear stands out due to its predominant use of brightly hued, highly patterned, traditional Indian textile driven collections.”

Another prominent personality in the business is Bharat Gupta, a leading fashion consultant and celebrity stylist who believes that 2020 may foresee the coexistence of contrasts — minimalism and attention to construction juxtaposed with the drama of ruffles and fringes. He adds that the major movement that has been progressively noticed on and off the runway will be towards “neutrality”.

Fashion will not bracket itself on the basis of gender or body type, but towards a more sustainable, eco-friendly and inclusive nature. This trend forecast, which many in the industry are already embracing, is likely to gather strength in the world of fashion in the new year.