Gucci forced to pull back 'blackface sweater' from stores after complaints. 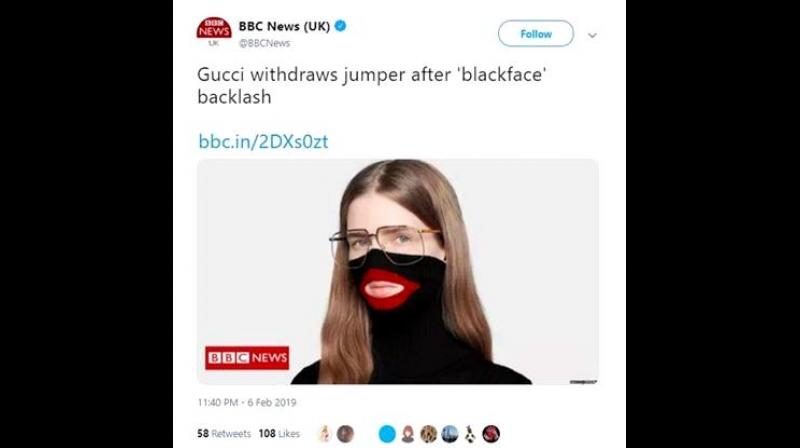 The apology Gucci issued said that they were fully committed to the concept of diversity and focused on increasing it throughout their organisation even. (Photo: BBCNews/Twitter)

Rome: Gucci has apologised for a wool sweater that resembled a "blackface" and said the item had been pulled from its online and physical stores, the latest case of an Italian fashion house having to apologise for cultural or racial insensitivity.

In a statement posted on Twitter on Wednesday, Gucci said it was committed to diversity and considered it a "fundamental value to be fully upheld, respected and at the forefront of every decision we make." The apology further read, “We are fully committed to increasing diversity throughout our organisation and turning this incident into a powerful learning moment for the Gucci team and beyond.”

The turtleneck black wool balaclava sweater which they introduced covered the nose and included a red cut-out for the mouth. It was ridiculed on social media as insensitive and racist, at a time when the US is grappling with cases of old photos of politicians with their faces blackened.

In December, Prada said it was no longer selling a line of accessories that featured a character with brown skin and exaggerated red lips after complaints they resembled blackface.

And last year, Dolce & Gabbana cancelled a Shanghai runway show and apologised after complaints that an advertising campaign featuring a Chinese model trying to eat pizza, spaghetti and a cannoli with chopsticks was culturally insensitive.