Celebs can’t seem to be getting enough of this ‘cold knee’ look. Take inspiration from experts on how to slay in ripped jeans. 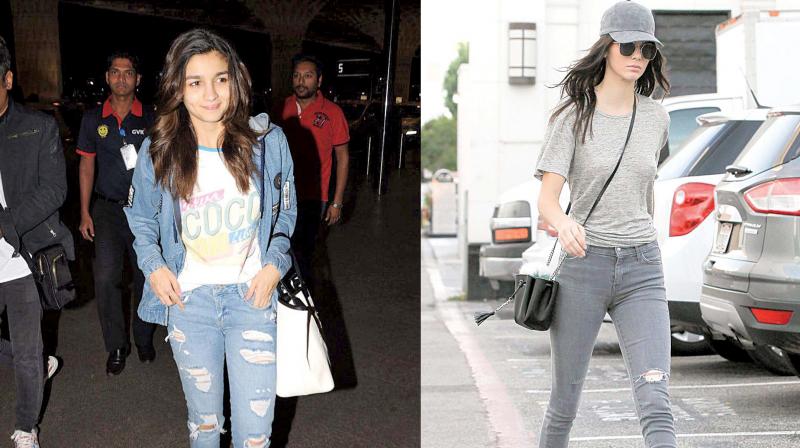 Add a touch of sass with ripped jeans, just like how Alia Bhatt does. Sneakers are a good option to pair your ripped jeans with, like Kendall Jenner .

As far as sartorial rules go, the disheveled appeal continues to reign supreme. With the ripped denims going steady in the fashion scene, it comes as little surprise to witness celebs and fashionistas sporting the trend with gusto! But how much is too much? When does one stop the shred to prevent a dud? Popular names from the fashion fraternity lay down the rules to slay the trend...

Hinting at how it’s about going all out with the trend, designer Manoviraj Khosla opines, “The ‘extremely shredded’ look is very cool. If you’re willing to give ripped denims a try, you might as well go all out.” Khosla also recommends taking things up a notch by choosing contrasts to match. “Opt for a pair of very shredded jeans, and wear contrast printed leggings underneath. You can team it with a formal jacket to jazz up the look.” Despite millions raving about it, sporting the raging trend, according to her, requires putting enough thought into your attire in order to avoid an ‘overwhelming over the top’ vibe. Designer Deepika Govind reveals, “I’ve always believed that there needs to be a sense of aesthetic and balance. However, with so many variants and poor emulations going around, some of the results have been appalling. Ideally, ripped denims are cut for the slim and sleek. But more than the body type, I urge youngsters to re-access their personality.  Steer clear of extreme ripped denims at work. For beginners, I suggest sticking to scraping that’s controlled. The ones who’ve been keeping up with the trends, can get experimental and dramatic with their ripped denims. The ‘ripped jeans’ look screams casual chic. So, pair it with neutral-hued tops, cold shoulders, off shoulders, summery cotton blouses. Mules, slip-ons and moccasins are great footwear options to go with.”

Going by the books, designer Sanchita Ajjampur believes comfort is king, and so is tweaking in one’s personal sense of style . “Personally I like to juxtapose ripped or distressed denim with a classic such as a white shirt or a top made from tactile fabric such as silk or velvet to inject a feminine touch or a pair of embellished sandals for a little glamour. Consider your body shape. If you are pear shaped with short legs, a loose boyfriend fit might suit you better than spray-on skinnies. For me this look is all about balancing  ripped jeans, scuffed sneakers and a baggy top might look cool on  a skater boy or girl in Venice Beach but perhaps it’s not the right look for the office or a night out.”