The 70’s collection of Elie Saab was filled with little bit of romance and lot of love. 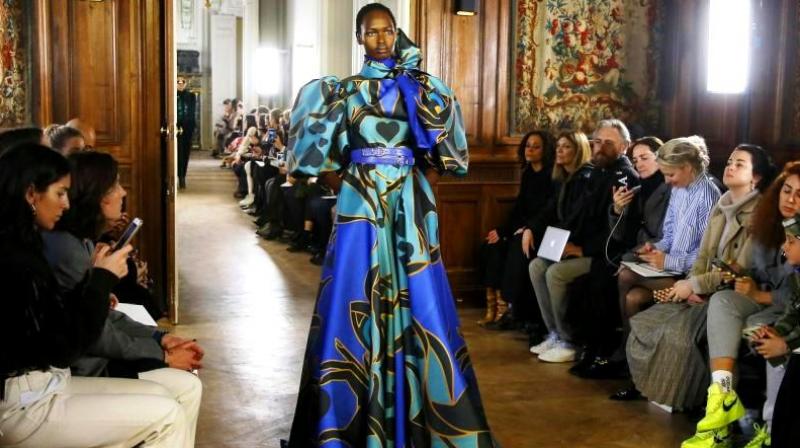 Paris: Many guests invited to the Elie Saab show were held up by snaking traffic caused by the yellow vest demonstrations in Paris that began by the nearby Arc de Triomphe. But the display, held at the exclusive Hotel Salomon de Rothschild, started almost on time and without incident.

Paris’ Fashion Federation has held top level meetings with police to assess the threat of any potential disruption to shows, especially because luxury Parisian boutiques were smashed in previous marches. No major incident has yet occurred.

Some guests gasped as shouts erupted on the street ahead of the show — but the fracas, it transpired, came from excited fans of VIP attendees who included American socialite Olivia Palermo.

This is the second time Paris Fashion Week has coincided with the protests. Activists argue the French political system is stacked in favour of the elite and big businesses. An infectious, retro soundtrack had fashion editors smiling as their tapped their feet at Elie Saab’s fun collection that channelled this season’s top trend: The ’70s.

Charlie’s Angels-style jabot collars and high necks led the eye down to tight-fitting dresses with floppy ruffles across the bust or down the side. Later, sparkly disco gowns dazzled.

Thigh-high leather boots — another big Paris trend — were delivered in eye-popping colors such as vivid blue, carmine red and cadmium green. They matched the hues of the gowns in a “total look” effect.

The collection, the house said, was filled with “a little bit of romance and a whole lot of love.” That mantra translated as an overly busy heart print on skirts and gowns that diverged from the retro musing and fared less well.