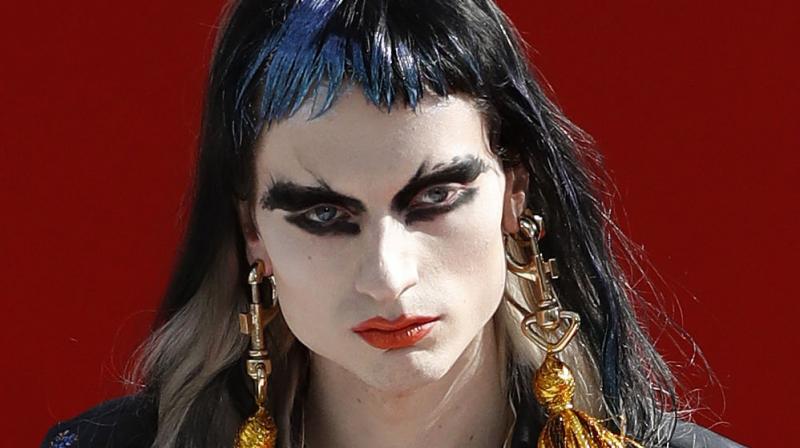 A model presents a creation for Vivienne Westwood during the 2018/2019 fall/winter collection fashion show on March 3, 2018 in Paris.(Photo: AFP)

PARIS: The buttoned-up styles of the Victorian era have met their nemesis in the unbridled sexuality of British punk in contrasting shows at Paris Fashion Week.

Here are some of the fall-winter highlights from the shows Saturday, which included Vivienne Westwood, Elie Saab and Hermes:

The raw sexuality of British punk was on full display at Austrian designer Andreas Kronthaler's show for Vivienne Westwood. Big red-white-and-blue carpets - in the colors of the Union Jack - led guests' eyes up to the show's decor of dismembered, upside-down mannequin legs. Three scantily-clad Goth ravers climbed up onto podiums around the runway as the show began and started to gyrate provocatively.

The clothes channeled the punk styles that made Westwood's name in the '70s - but it was also a celebration of violent color and couture. A diaphanous marbled pastel froufrou gown looked initially like a watercolor painting - until, on further inspection, the belt that consisted of adult toys came into focus.

Instead of the program notes, Andreas Kronthaler left guests a photocopy of a touching love letter he'd written to his wife and design partner Vivienne Westwood, 76. The 65-year-old Austrian designer had handwritten the missive on blue Eurostar notepaper on Feb. 28 while traveling between London and Paris on the cross-Channel train.

"Dear Vivienne. Heart. God how long have we known each other?" it began, before listing all the fashion influences Westwood had exerted on him over the years.

"When in doubt: dress up! ... These mantras of yours and so much more became part of my life and work. I still thank you to this day," it read. Kronthaler first met Westwood in 1988 and they wed in 1993. He had for a long time taken the role as a silent creative partner but took over officially as designer in recent years. Kronthaler ended it: "Love you forever. Andreas."

Elie Saab went to the "dark romance" of the Victorian era for inspiration for his brooding fall-winter offerings. The house produced a predominantly black collection of high necklines, statement bell and Juliette sleeves, defined shoulders and lots and lots and lots of ruffles.

There was a delicacy to some of the fabrics and detailing such as in large velvet bows draped from collars inspired by the 19th-century paintings of France's Auguste Renoir. Saab fused that covered-up era's styles with an exploration of all things floral - and served it on his bread-and-butter design choice, cinched-waisted gowns.

The collection, entitled "Winter Bouquets," had blooms as prints, embroideries and appliques in white, blush, powder blue and burgundy.

HERMES SHOWS OFF ITS COLORS

With an exotic set and a glowing red runway, Nadege Vanhee-Cybulski emanated quiet power in a collection that showed off her skills as a colorist and signaled that the Hermes designer is growing in confidence.

Detailing such as embroideries across a shoulder had a Latin American feel and demonstrated the famed craftsmanship of Hermes, a fashion house that in France has become a byword for luxury.
Vanhee-Cybulski's penchant for checks produced a beautiful square brown dress. But the real finesse was to be found in the collection's color combinations, such as when a belted jumpsuit in maroon was set off stylishly by a soft vermillion coat.

In a collection that took its vibe from the street, Junya Watanabe's edgy collection went stylishly off-kilter. Oversize double-breasted suit jackets towered above floral leggings in an intentional effect that made the legs look like sticks. It was given greater resonance with large block-like sneakers and preppy socks.

Elements of deconstruction - such as billowing sleeves that looked like pieces of fabric snipped away, or trench coats partially hidden in fur - demonstrated the skill that showed why the Japanese fashion designer was originally the prot?g? of Comme des Garcons designer Rei Kawakubo.
Bright reds and blues were then injected into the color palette - such as in one statement trapeze-shaped raincoat and in one mushroom-shaped bubble jacket - giving the 41-piece show an on-trend '80s vibe.