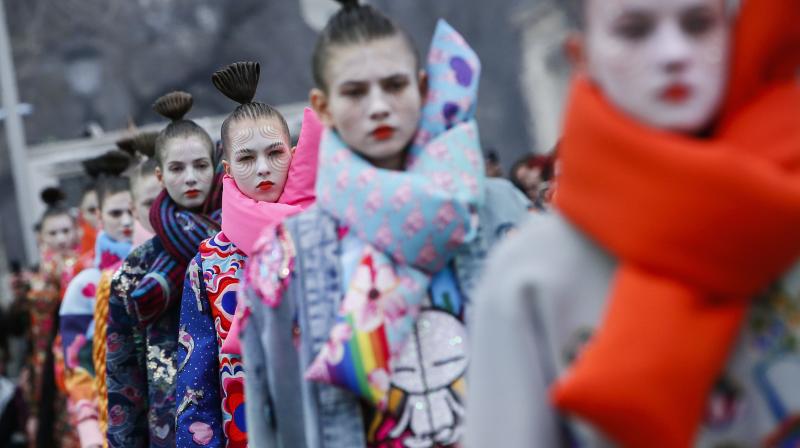 A romantic Victorian spirit infused many of the fluid dresses and silk shirts shown Thursday at Chloe.

Here are some of Thursday's highlights:

CHLOE PILES ON THE ROMANCE IN PARIS

French actress Isabelle Huppert and model Alexa Chung were among notables at Natacha Ramsay-Levi's sophomore effort for Chloe. The low-key designer worked romance into the house's signature '70s boho look for a collection that was decorative and mixed up a "kaleidoscope of identities."

A Victorian spirit infused many of the fluid dresses and silk shirts. High collars met long bell sleeves and lashings of lace. Gold chains, jewelry and low slung belts added movement to already kinetic silhouettes in which skirts were cut on the bias or floppily pleated.

Model of the moment Kaia Jordan Gerber, the 16-year-old daughter of Cindy Crawford, strutted out with a gold chain adorning a beautiful eggshell-colored 70's skin coat. But the strongest feature of the collection was its wild fur trims that showed off the skill Ramsay-Levi acquired at Louis Vuitton. A dark vanilla shirt dress had a silken fur fringe that cascaded out of horizontal paneling, even causing icy-cool U.S. Vogue Chief Anna Wintour to turn her head.

Although his day job is fashion designer, Kenzo Takada is an amateur artist of some talent who has painted several reproductions of "The Dream," the Henri Rousseau masterpiece. He was first struck by the painting in 1965 when he saw it hanging in Paris' Orangery Museum. "I fell in love," Takada said.
The original two-by-three meter oil painting, which today hangs in MOMA, depicts a naked woman reclining on a chaise longue amid a jungle scene.

For each reproduction he made, Takada would paint someone he knew in place of the reclining woman, and each canvas would be hung in a different Kenzo boutique. Ahead of their show, designers Humberto Leon and Carol Lim met with the Henri Rousseau Foundation to secure the rights to use the painting as a touchstone for the presentation.

Guests arriving in the ornate Paris Mint venue could hardly believe their eyes. In a historic mirrored salon, set across long tables, tasty cheeses, exotic fruits, wines and nuts spilled out onto foliage. Kenzo had prepared a jungle-themed Bacchic banquet.

As the show began, ushers with white aprons carried large replicas of canvas reproductions of Rousseau's. At one point, some guests were shocked when a naked woman appeared covered in body paint in reference to the 1910 painting's subject.

The artistic musing infused the clothes. In a stripe-heavy aesthetic, knitted skirts and tops were delivered in eye-popping colors such as Cerulean blue, bright red and yellow, evoking the hues of the jungle.

A heavy diagonal ruffle down a skirt gave it a vibrant dynamic. And myriad colored scarves were piled up on top of one other. Elsewhere, Rousseau was more explicitly referenced through "tapestry jacquards" in tops, dresses and pants as well as in shearling coats.

At his Paris Fashion Week show, New Delhi-based Manish Arora fused the vibrant color of the Indian subcontinent with traditional and contemporary styles of Japan. The result was explosive.

The kimono was the starting point and it was evoked from head to toe. Dramatic top knots led down to thick multicolored scarves tied like Obi belts around the neck. Faces were sometimes painted like a Geisha with big red lips.

Silken kimono looks with oversize sleeves were fastened with tight belted waists and buried by multiple layers of thick fabric. And then there were the colors. The bubblegum pink, blinding orange, reds, blues and greens seemed to hit every hue on the planet. The vivid street style of Japan's Harajuku Girls was evoked in one blue-and-yellow look that grabbed attention.