Back in the limelight

The play was staged in National School Of Drama and Sri Ram Center, New Delhi earlier this September. 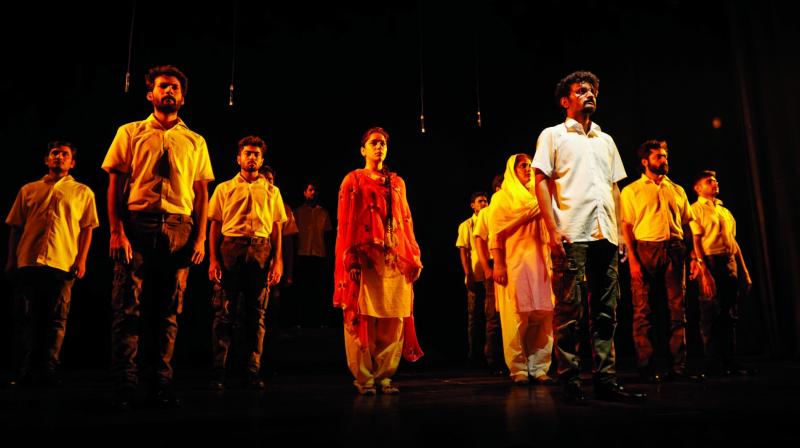 In a freewheeling chat, eminent theatre personality Piyush Mishra talks about his return to theatre after 16 years with his famous play Gagan Damama Bajyo.

After dedicating two decades of his life to theatre-stage in New Delhi, when Piyush Mishra moved to the city of Mumbai on a day like this 16 years ago, he had only two resolutions – to earn money and to never return to the limelight of the stage – the weight of which was heavier than his luggage.

Henceforth, in a stellar career trajectory that has seen him playing Kaka in Maqbool, directing music for Gulaal, narrating and starring in Gangs of Wasseypur movies, Mishra has come a long way, ensuring to fulfill the first of his two resolutions on his way. But the ghost of the past, just like his iconic character in Vishal Bhardwaj’s earthy rendition of Macbeth, followed him wherever he went, pushing him to go back to his roots. Hence marking his return, the actor-director-poet-lyricist-songwriter is all set to stage his musical Gagan Damama Bajyo at the 36th Prithvi Theatre Festival.

“When I came to Mumbai, I was a broken man. I was emotionally, financially and physically exhausted. There was an overdose of alcohol. I hadn’t given much to my family. I had responsibilities,” reminisces Mishra, who was seated in a humble courtyard of a rehearsal-studio, with his actors and production team swarming around the thespian. “And now that I have earned some money, we thought of doing a play,” says Mishra, who was pushed in the direction by his production team at Tamboo Productions.

Written by Mishra in 1994, Gagan Damama Bajyo chronicles the life of freedom fighter Bhagat Singh, encompassing his tryst with revolutionary ideologies and the conflict that his ideologies bore in the years to come.

“It was N.K Sharma’s idea to write this. He was a leftist then and felt like the state of the country was despicable,” reveals Mishra as what acted as an impetus for him to write the play. “I had only known whatever the NCERT books had taught me – he had thrown a bomb in the Central Legislative Assembly. But when I started reading about this man, I was shocked. I kept on thinking ‘Who is this man? ‘What am I doing?’,” adds the Pink actor, who discovered that people had always heard of the martyr, but were elusive of the ideas that made him one.

Realizing how he was dealing with a subject, who was so intensely passionate, the playwright decided to show the vignettes from the life of the martyr and his contemporaries by focusing on the imagined exchanges between these historical figures.

“I wondered how these students of Lahore National College would have been talking in 1921. What would ragging be like during that time? Must be like: ‘Mangal Pandey ke baap ka naam batla (Tell the name of Mangal Pandey’s father)’. So these are some of the fictional historical anecdotes that have been very carefully strewn in the script so that people don’t get bored,” reveals Mishra.

Another important character in the play is fictitious Marakandey Trivedi, who betrays the trio, and his role is to question the characters so that they can bring out the voice of reason.

Even though the musical gets staged a lot, the director says that it’s the understanding of the subtext that has been missing in these ubiquitous productions. “I had written it, I knew what all is hidden inside the text – subtext. So even though the play gets staged a lot, I think, it’s the proliferation of the subtext that, according to me, had always been missing,” he says.

Interestingly, it’s not just the return of the thespian but also the return of Mishra’s harmonium, which he used to play when portraying the character of Lokgayak in the past productions. “It’s a German harmonium from the 1930s. So, I often joke that Hitler might have surely visited the factory and would have touched the harmonium because of which radical songs come out of it,” laughs Mishra.

In the 16 years of his film career, Mishra has earned esteemed reverence for his work from his colleagues and his cult following. He came to Mumbai to write the script of Ajay Devgn-starrer The Legend of Bhagat Singh, which was based on his play. Now that he is going back to the stage with the same tale, life only seems to come a full circle for him.

“Today, whatever I am reaping is because of what I’d sown during my theatre-years. I had thought that chapter of my life was over, and now I am stepping into a new one. But I could not let go of my old life. Yeh nayi zindagi nahi thi, woh poorani zindagi mera peecha kar rahi thi (This wasn’t a new chapter, my old life was following me wherever I’d go),” says Mishra before adding that now that he has rejuvenated his career in theatre, he’d go on to revive his other plays like  Woh Ab Bhi Pukarta Hai, Arsenic & the Old Lace, Suno Re Qissa among others. “I am enjoying cinema, but I’m back in theatre,” concludes Mishra with his eyes set on the rise of the curtain.