The Swiss documentary theatre practitioner who was in the city recently chats about his creative journey. 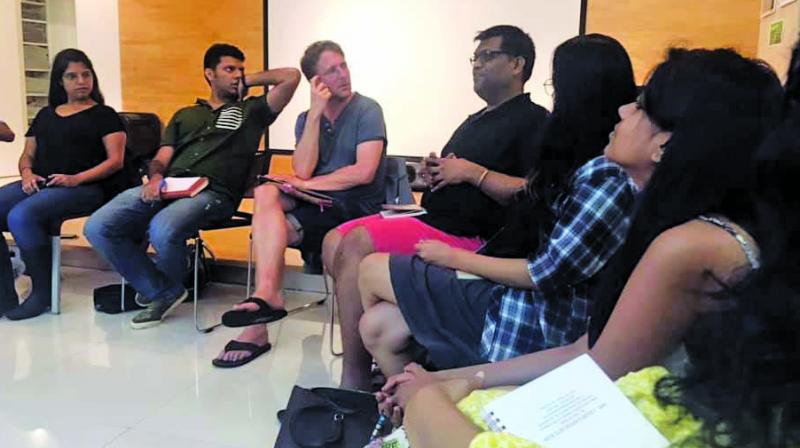 Boris Nikitin during the workshop.

Over the years, William Shakespeare’s plays have inspired generations of artists. Whether putting his classic texts on stage or turning them into movies, many creatives have recreated his works. Swiss theatre director Boris Nikitin is no exception.

We caught him sitting and watching a performance on a projector screen amidst other artists, in an open hall of the Goethe Institute in Kala Ghoda. A bald man standing at the center of the stage, mic in hand, is mourning over his father’s death, much akin to the opening of Shakespeare’s Hamlet. With his layered personality, the boy represents the life of Boris himself in the shadow of Hamlet, which Boris says is part of his documentary theatre.

“I wrote this text with a lot of biographical material of my own life, and I mixed it with Hamlet. My father passed away a few months before the premier of this show, and I included this in my presentation,” says Boris, who was recently in the city for a two-day documentary theatre workshop series titled Starting Realities. Theatre maker Anuja Ghosalkar and German documentary theatre director Kai Tuchmann facilitated the programme. The second edition of workshop aimed to introduce Indian audiences and
theatre practitioners to varied styles and forms of documentary theatre.

Evolved in early 19th century, documentary theatre, also known as verbatim or investigative theatre, uses pre-existing documents and source materials for stories about real events and people. However, Boris breaks this monotony and brings biographical elements into his plays — He explores the notions of ‘vulnerability as an ability’ and its relation to the discourse around documentary performance practices. He also uses his collective vision for his work, where he picks up stories from his own life and also connects them with pre-existing texts or characters.

“I am hesitant to use the term ‘documentary theatre’, because it has a resonance of journalism and research, and then it becomes political. I promote the idea of vulnerability as an idea of ability, to something that you can share. By creating new options I bring new possibilities of performances, because documentary theatre has a lot to do with it. I want to broaden the concept,” insists the artist.

Boris is walking the line between performance and illusion theatre, and his work highlights the ambiguous and potential, in which individuality and the capacity to act are reimagined. For the last ten years, his work has reflected the representation and production of reality and identity in politics, economy, religion, personal stories and in the arts. “I am very critical about my approach. You can’t just take a document and rely on it. That can be misleading at times, because then you are identifying yourself with facts and stuck to believe in the power of that fact. I invent my own ways. Documentary theatre is authoritarian because it is documented,” the director explains.

When historical documents, often made in times of political and social upheaval, become farce, Boris believes in creating intimate performances with real life stories. “The danger of documentary theatre is that things are very clear to the audience. It’s good to play with references. You can’t just present facts, you need to be experimental and keep on twisting things,” explains the artist, adding that it is good to write stories based on your own experiences and facts, which are not told in mainstream theatre.

“It has a resonance of feminism. Just like women started writing their own plays that depicted their own lives, one needs to follow the same pattern to make documentary theatre mainstream,” he concludes.