What the Bharatanatyam arangetram signifies 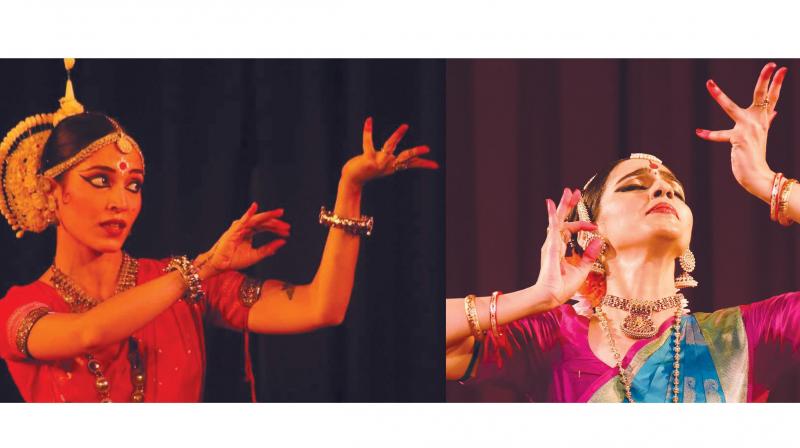 Classical artistes love to intone away the sacredness of a tradition, while subjecting many of its manifestations, over the years to the worst type of commercialisation. Arangetram (which comes from Arangu +etram — literally meaning to rise to the performance space), the debut of the Bharatanatyam dancer when she steps on to the stage for a maiden solo performance, has over the years been made to resemble an extravagant coming of age of a society debutante. The more wealthy the guardians of the young dancer, the more opulent every aspect of the event — from invitations to costumes, to the invitees from high society, with the performer’s legitimacy shown by the presence of politicians.

Striking a note of complete contrast was the warmly intimate atmosphere at the India International Centre, its lobby and auditorium packed with friends, family and well wishers for the arangetram  of Tara Rajgopal, a student of Aditi Jaitly Jadeja.  Aditi Jaitley’s teacher, Leela Samson, the chief guest for the occasion, set the tone with her dignity and elegant simplicity. Addressing the audience after the customary post performance courtesies to all the musicians and other contributors, Leela pertinently pointed out the significance of this function. Arangetram, when dance has become business, seems to have lost sight of the fact that it marks a testing of the waters — the starting point of a long journey for the one who wants to take to it. This arangetram for a change, exemplified what this occasion should be — with friends, well-wishers, old school and college teachers of the dancer — exuding a sense of fulfillment for the student, her family and the teacher who had passed on what she had had been given by her acharya to a deserving student.  Leela recollected the trepidation with which she and her ilk went through their respective debuts with giants and acclaimed gurus conducting the recital. The high point of the morning recital with the dancer presenting Leela’s interpretation of Dandayudapani Pillai’s  varnam “Samiyai vara solladi” in Poorvikalyani , set Leela Samson off on a nostalgic journey about her own student days in Kalakshetra where this guru taught for years. No young dancer those days could command a team of such top quality musicians as Tara Rajgopal had for her recital — each of them representing a family parampara.   After having been treated to the soaring melodies of Sudha Raghuraman’s singing, Leela’s thoughts went back to her late grandfather, father and uncles — all of them musicians of a high order. As for the exquisite flute music of her husband G. Raghuraman, (hailing from a family of Nattuvanar/musicians) she still recollected the image of the young boy in half pants attending concerts. The same Dandayudapani Pillai she remembered giving lessons on rhythmic touches on the mridangam to the then much younger Chandrasekhar — the mridangam expert for the recital. She confessed to have been straining her ears to listen keenly  to his “arudis”, the rhythmic flourishes sometimes unfortunately drowned, in the finishing points, particularly,  by enthusiastic applause intervention. And then there was the very talented violinist  G. Raghavendraprasad, who from a very young age showed unusual aptitude for music. She had some words of praise for her own disciple Aditi whose diligent passing on of what she had imbibed, to the next generation was evident from the very finished performance of the student. The entire event epitomized the beauty of a tradition being passed on from one generation to another, which is what tradition is all about- One needs to understand the unique features of the  arangetram representing a baby step forward.

Simple and uncomplicated, with well chosen items, here was a debut which in typical conservative fashion followed the complete recital format, with Jatiswaram and Sabdam (less and less performed today) given their rightful place. Tara Rajgopal despite her slight nervousness, with her neat dance lines, right from the starting Alaripu in Tisra Ekam, showed her feel for rhythm. The disarming smile came into action in the Shabdam which with Kambhoji as the main base raga went into short sequences in Todi, Kalyani and Surati. With Sudha Raghuraman’s vocal support the varnam “Saamiyai vara solladi” became an audio-visual delight, built round the love struck nayika cajoling the friend, to take her urgent message of love to Lord Muruga and fetch him. “Why this tarrying when this is the moment for love? Are you so heartless as to make this fuss?”  Tara went through the entire varnam without a flaw,  the crisp and not overlong teermanams linking interpretative passages providing the right punctuation points with Aditi Jetley’s nattuvangam, and Chandrasekhar’s restrained mridangam touches which added tonal melody. Tara tends to keep heels grounded while doing the ‘Kudittumettu’ toe/heel step.  And Tara’s pleasant abhinaya, with time and experience, is bound to develop more subtlety and variety. The Shankarabharanam Padam “Dari Joochhuchunnadi needu priye” with the sakhi painting a picture to the Nayaka,  of his waiting beloved, eyes eternally scanning the road for a sign of him’ was well done. The dancer rose to the challenge of balancing on one foot for the frozen moments in “Anandanadamidum Padam” visualizing the dance of Nataraja. The devotional ardor in Narayana Teeertha Tarangam in Bageshri and khandachapu talam was as much due to the very involved singing of Sudha, as to the dancer’s involvement.

At the Triveni Auditorium one was treated to the more experienced Bharatanatyam performer. Madhura  Bhrushundi,  Geeta Chandran’s disciple who had her debut in 2014 and whose recital fully justified her selection for the department of culture scholarship. Right from the Pushpanjali composed by Sridhar Vasudvan, followed by the prayer to Saraswati set to raga Sri, one saw an assured dancer with a fine presence, her well held, straight- backed body demonstrating in the dance a, blend of technical grasp with interpretative understanding. The complete dancer came into full play in the varnam- a vintage Tanjore quartet composition in Kambodhi, rarely performed by present day dancers-  “Sarojakshiro vibhooti, ee samayamu sarasaku rammanave”. Structured in the conventional sringar mould, the love struck nayika here is portrayed addressing her sakhi entreating her, to convey her message to Lord Brihadeeshwara, urging his presence by her side. The main motif of the charanam of Manmatha aiming his flowered darts at the heroine, burning her up with the unrequited desire of love, was well brought out. The dancer’s gradual buildup of mood in a varnam relies a great deal on the quality of the accompaniment and here the dancer was excellently served. Conducting the recital with the assertive Nattuvangam power was Geeta Chandran with  Venkateshwaran’s vocal support combining classical purity with involved melodic richness. Manohar Balachandran’s mridangam rhythm, totally supportive of the dance, evinced musicality in clarity, and Raghavendraprasad’s violin accompaniment added to the rich melodic impact. The post-varnam pure abhinaya part comprised Vaideeshwaran Koil Subbaramaiyer’s Padam “Aduvum Solluval”  in Saurashtram. The now displaced heroine sarcastically exchanges with a friend the rags to riches story of the now boastful ‘other woman’, who but till the other day, was approaching her begging for a piece of jewellery or a saree to wear. But the item that had the audience swaying was the Meera Bhajan in Maand made so popular by the late M.S.Subbalakshmi–the item being a favourite of Madhura’s teacher too. The concluding note was the Tillana in Rageshri.

Preethi Ramaprasad a student of Sudharani Raghupathy, residing in the United States, in her Bharatanatyam presentation at the Stein auditorium faced the disadvantages of a very scanty gathering and sound arrangements which made the tape to which she danced sound muffled, taking away from the impact of experienced musicians singing compositions of late Madurai N. Krishnan who worked with Preethi’s guru for years. Following the “kripasamudram…” (ocean of compassion, with the three eyed splendor of Shiva, the dancer went on to the Swarajati in Anandabhairavi “Sakhiyee nee inda velaiyil jaalam seyyade”in the time-honoured pattern of  the nayika pleading with the sakhi to fetch Lord of Mannargudi, Rajagopala, whose praises are sung by the whole world. Preethi has very mobile facial expressions and this was evident in the treatment of the swarajati concluding on the note of the nayika seeing the sakhi off on her errand. In Papanasam Sivan’s composition Shivagamasundari in Mukhari, after the opening slokam set to Kalyani, the dancer as a woman praying to the Goddess, in the line “Gitavinodini Podum shodanai” tries to bring in the travails of the contemporary woman who as a single mother struggles to bring up her children and also as one separated from her children – the last a very felt response to recent American policies. Preethi mentioned working closely with her teacher Sudharani while conceiving the sancharis for this line, and she has had Priya Murali a senior disciple of Sudharani as her mentor.  Following Swati Tirunal’s “Chaliye Kunjanamu” in Brindavan Saranga, the finish in Madhyamavati was with the quiet prayer based on the verse “Akashaat patitam toyam Sarva gachhati sagaram….” One was left feeling that the best of this dancer was not seen.

The Odissi departure in this pure Bharatanatyam scenario was made by Madhyama Segal, Sangini and other students of Pallavi the institution run by Kiran Segal. Their presentation at the IIC auditorium had a surprisingly good gathering, the recital being conceived and presented by the students themselves. The opening Mangalacharn set to raga Pahadi, with the customary “Kadachit Kalindi..” Shankaracharya prayer to Jagannath in the invocation, had the rhythmic part of the ‘trikhandipranam’ in the typical Mayadhar Raut style which has its own individualistic features. What was called Thai Naach, (which acquires the form of Batu in the Kelucharan school, of  Sthai in Debaprasad school of Odissi and Thei ghara Nata in the Pankajcharan school) with all the stances and typical postures sculpted on Odissi temples, rendered by a multiplicity of dancers had group discipline, amidst individual differences. “Rase Harimiha vilita vilasam” the Ashtapadi, presented as a solo by Madhyama Segal, portrayed Radha, lonely in her separation from Krishna, recapturing the old memories when she ecstatically danced with Hari. Set to Satyanarayana Maharana’s music in raga Bairagi and Jati tala, the dance composition, with fleeting nritta flashes between interpretative passages was interestingly paced.  Madhyama’s still evolving abhinaya contained an understated sensuality, communicating the message in the verses with a quiet persuasion.  Preeti Mahesh’s interpretation of the Oriya lyric “Batto Chhado suhato nagaro Jamuna Jibi Neera Aniki..” set to music by Balkrushna Das, needed more of the pleading tone from Radha, along with the peremptory tone of a daughter of Vrishabhanu, while trying to persuade the eternal teaser Krishna, to stop waylaying her on her way to fetch water from the river. The Bageshwari Pallavi, a music composition of Satyanarayana Maharana, in the dance visualization by Kiran, had a group presentation. Again in the togetherness, individual differences stood out. The group rendition of Dashavatar, danced with great enthusiasm, had some neatly worked out group formations for each avatar – though Prashant Mangaraj’s vocal support flagged towards the last stages in sruti alignment and sur faithful singing.The other instrumentalists too seemed less sure, with poor lighting making it difficult for them to consult the cues they had jotted down on a piece of paper. But on the whole a good effort by the disciples!