The Navrang Dance Academy had also called a few international celebrities to the event. 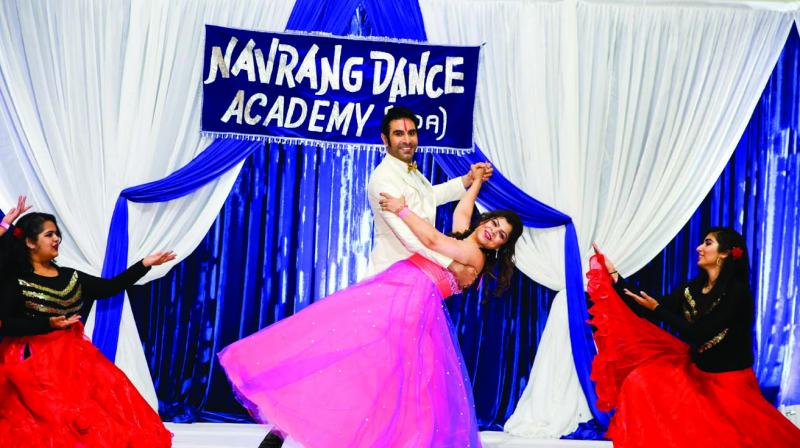 In today’s world, we see Indians all over the world. From Great Britain to the United States of America, people of Indian origin are almost everywhere. There is a concentration of the Indian community in London’s Southall and Wembley, and in the US,  one can find a large number of Indians in New Jersey and the San Francisco Bay Area.

It is believed that the Indian community that moved to US many decades ago still lives in the same old-fashioned manner, some even find the humour in it, saying that Indians in India are more modern than Indians in the US. Each to his own, I believe, and setting one’s roots in another country and bringing up children is not an easy task when one is away from one’s motherland.

Indians in New Jersey, who lived a very traditional life until recently, experienced a new dance revelution, and it was all thank to a woman with great vision. Varsha Naik of Navrang Dance Academy organised “The Grand Magical Night”, a huge vintage ballroom party at the prestigious Royal Albert’s Palace. This gala celebration of dance was attended by hundreds of couples who came with great excitement and enthusiasm with their loved ones to experience the old world charm of ballroom dancing.

I feel humbled to say that for this romance-filled night, I was invited all theway from India to choreograph and teach. This one-of-its-kind night was very unique and different. It was more of a grand family event where couples ditched their traditional Indian wear, men got into their sharp tuxedos and suits, and women in their long flowing gowns with high heels, all ready to dance the classic ballroom moves.

After the performance, the most classic ballroom dance of all times, the waltz, was taught to all the guests present. In an hour-and-half-long dance workshop, all the traditional steps of the waltz were taught. I was happy to see the eagerness and enthusiasm of the so-called traditional Indian community of New Jersey.

The Navrang Dance Academy had also called a few international celebrities to the event. At the workshop, dancing away and showing off their moves was popular French actor-director Jacques Roybin, Hollywood actress and American super model Ekaterina Hanssens and Mr India United Nations Prakash Patil among others.

The writer is a Latin and ballroom dancer, a World Book of Records holder and a choreographer.