The forms did not matter, she was at ease with each one of them. 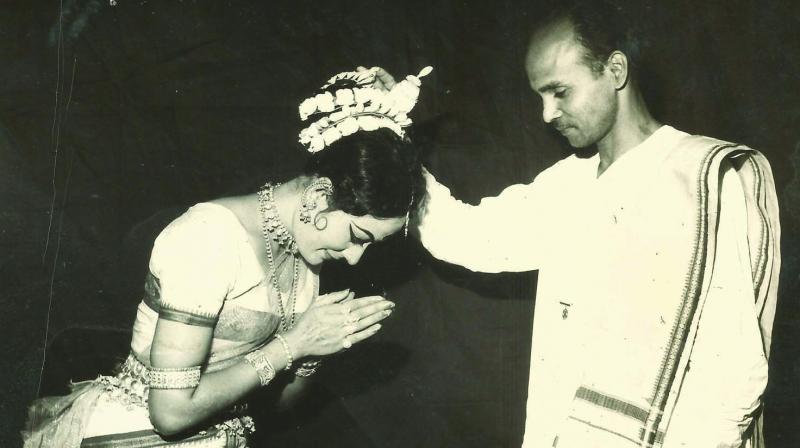 As a child she recognised and knew her path, as an adolescent she was convinced of her path, as an adult her streak of rebellion became the strength for walking the path. Her eyes could portray the depth of the love of Radha as eloquently as the fury of Draupadi. Her movements resplendently displayed the forms that became her language and mode of communication. The forms did not matter, she was at ease with each one of them. Literature, knowledge, mythology, sociology, philosophy and concepts enshrined in sanskruti were her soulmates. Nothing but perfection pleases her, she breathes, moves, lives and loves dance and her dream is to create and elevate. I am talking about the legendary dancing diva — the one and only Padma Vibhushan Padma Bhushan Dr Sonal Mansingh.

Dr Mansingh has lived a life like no other and I am blessed that Sonalji addresses me as her dancing son and to me she is my dancing mother — my “Sonal Maa”. She had had an eventful life inundated with highs and lows, twists and turns, and like the mighty Ganga, she emerges, flowing easily in every phase of her life’s journey. Sonal Maa celebrated her 75th birthday with great élan, presenting a show showcasing her life’s journey through Sonalscape. I was fortunate to attend the enriching presentation on the life of Sonal Maa which she personally presented at the packed Kamani auditorium in the capital in a very interesting dance, drama, storytelling and film format. Sonalscape was like a documentary on the life of Sonal Maa — personally taken through. Legendary Bollywood actress, Padma Bhushan Waheeda Rehmanji, who happens to be Sonalji’s old friend was the chief guest for the evening.

Congratulating Sonal Maa on her show, Waheedaji said, “We Indians are really lucky to have someone like Dr Sonal Mansingh who has dedicated her life to keep the tradition of Indian culture and dance alive. She has been a source of inspiration and she has also held on to our important cultural heritage and kept it healthy and alive.” She further added, “It is because of Sonalji that the present generation knows about the tradition of Indian performing arts that are still thriving in India.” Remembering their old dancing days, Waheedaji said, “I have known Sonalji for quite sometime now and I know how serious she is about preserving our cultural history and artforms. God bless her.”

Not just that, even the President of India Ram Nath Kovindji sent his good wishes to Dr Mansingh. He said, “This year marks a milestone in your life and illustrious career as an artiste and a leading cultural icon of our country. May you have many more years of sustained and dedicated service to dance as well as to enriching public life in India.”

The master-disciple concept has existed in every civilisation since centuries, the hierarchical flow of knowledge and skill is like a river swelling with every drop of water, from the rain and tributaries. The flow makes its way through valleys, gorges and difficult terrain and lends the goodness of its water for the benefit of people regardless of their ingratitude, greed, selfishness, colour, religion and other such trivial considerations.

The word “Guru” literally means noble, expansive, vast and all inclusive. The disciple is called “vidyarthi” or “shishya”, which mean seeker of knowledge. The words indicate the purpose of life is to garner pearls of “vidhya”, which means knowledge, skills and values from the master, the Guru. The role of a Guru is not only to teach the immediate subject at hand but to mould the fashion the student as a potter would prepare and shape a vessel into which can be poured the wisdom and knowledge of magnificent traditions.

Our dynamic Prime Minister, Narendra Modiji, who has declared Sonal Maa as the navratna of his Swacchh Bharat Abhiyan too wished her for her birthday and congratulated her for Sonalscape — celebrating an eventful life of 75 years. He said, “Your lifelong dedication and commitment to teach Indian classical dance to our youth spanning several generations is truly inspiring. You have not only taken different dance styles to newer heights, but also ensured that dance becomes a medium of social and cultural upliftment.”

A few things mentioned by Sonal Maa at Sonalscape were life enriching. Speaking on Rasaanubhouti and how can one obtain rasa from everything we do in life, the celebrated dancer said in Sanskrit, “Yato hasta tato drishti, yato drishti tato manah, yato manah tato bhava, yato bhava tato rasa.” This means — glace with our eyes, follow the hand that is gesture, eyes are controlled by the mind so naturally the mind is involved, when the mind gets involved emotions arise and from those emotions the distilled aroma and taste of rasa is experienced.

Dance in India has never been looked upon as mere physical activity, but rather as a living experience in which the rainbow colours of mystical insights, poetic visions, civilisational history, philosophical concepts, musical iconography and individual interpretations merge to span the firmament of aesthetic experience. The body is the instrument but not the player and when the dancer vanishes, only then does the dance remain. This, Sonal Maa said, is the ultimate experience of enlightenment or Satori, Nirvana, Bliss and Ananda.

Further adding to the guru-shishya relationship, Dr Mansingh said, “The sum total of this wisdom takes us back to the collective wisdom of many millennia. Dancing and singing are the shortest and easiest way of self-knowledge, but it is the Guru who shows the way and leads on the path until the disciple has found his or her direction and has developed the strength to walk on.”

Warm wishes kept pouring in for Sonal Maa on the occasion of Sonalscape and her birthday. The vice president of India M. Venkaiah Naidu addressed Dr Mansingh as a true ambassador of Indian culture and said, “Dr Sonal Mansingh is a celebrated doyenne of Indian classical dance. She is revered as a legendary dancer and choreographer, her knowledge of Indian philosophy, folklore, iconography and their collective linkages with dance are truly unparalleled. She has been instrumental in taking India’s rich traditions of music and dance to the global stage. May God grant her good health, happiness and many more vibrant years in pursuit of new frontiers in the performing arts.”

Anyone who knows Dr Mansingh can’t help but be charmed and mesmerised by her multifaceted personality. She is of the rare breed that is adept in several classical dance forms. In addition to that, she is a great singer. There are very few who can match her genius abhinaya. She is strong, grounded in Sanskrit and that makes her among the few truly intellectual dancers in the world.

One thing you all will agree with me is that Sonalji lives her art and does not just perform it. From the way she adorns and carries herself, to the way she serves food to her guests or keeps her house — it is all of a piece. The evocative manner in which she communicates complex philosophical concepts and the core values of Hindu civilisation ensures that everything gets imprinted in the minds of her admirers.

I cannot conclude this article without mentioning the very naughty and humorous aspect of her being which kept coming out while she personally took us through Sonalscape. She can share sexy adult jokes with the same charm as she does her intimate abhinaya during her dance performances. It was indeed super fun to see this Durga-incarnate giggle like an impish schoolgirl while she narrated some funny and some serious incidences from her dance journey and also mimicked a few people who have immensely touched her life.

With this article I would like to wish my Sonal Maa many more decades of joyful creativity and I would like to also make a small request on behalf of all her admirers. Sonal Maa please share with all the secret of your perpetual youth — how you have defined age not just in body or demeanour but also in keeping your heart and mind forever young.