Artist Thota Vaikuntam from Telangana had craftsmen working under him to create the clay models to his desired precision. 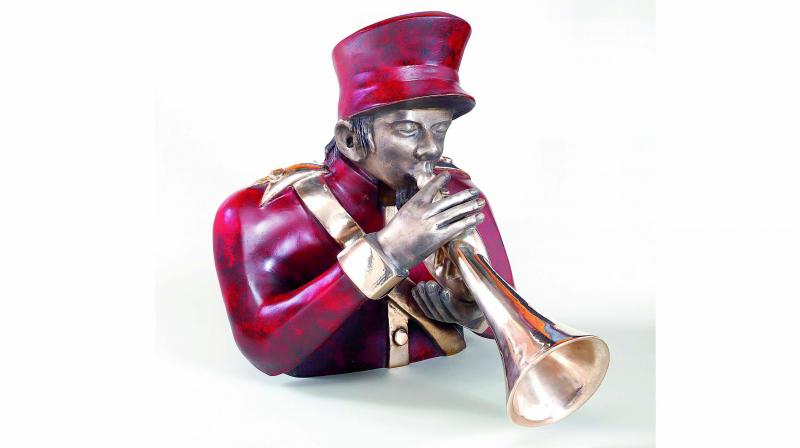 Creating sculptures of paintings on canvas without losing their signature styles requires a distinct talent. The ongoing exhibition at Kalakriti Art Gallery, titled Bronzed — From Paint to Patina, has on display bronze works that are part of a project inspired by the four eminent artists — Ram Kumar, Krishen Khanna, Jogen Chowdhury and Thota Vaikuntam — whose imagery has set ablaze the hearts of art lovers for decades.

The three-dimensional bronze not only brings to life and extends itself to a more physical form, but also adds a fresh perspective to the artist’s work. To create the bronzes, an artist had to collaborate with skilled artisans to recreate the figures from every angle, not only of what shows in the painting but also the ‘invisible’ dimensions in the figure or object painted. While surely a challenge, it provided artists with an exciting opportunity to look at their paintings afresh, making them constantly visiting aspects they had not attended to previously.

So too, this particular project allowed the artists to extend themselves beyond the constraints of their most distinguished works and, through a stroke of re-imagining, see their iconic figures come to life in these twenty-six bronze sculptures.

The late artist Ram Kumar’s figurative works in 1950s were the highlight at the exhibition, in which his works brought forward how human forms, too, can be a part of abstract art. Taking inspiration from the artist who was born in Shimla, the Vagabond series, almost six decades since its origin, adds another value to the bronze sculpture. This project was in collaboration with Bronze Age London, a leading sculpture casting foundry in the UK, resulting in the production of the premium quality bronzes.

The visual cross-hatching effect being an integral part of artist Jogen Chowdhury’s artwork, recreating it on metal, as a bronze sculpture, was a challenge. The Shantiniketan-based artist tells us that he took printed images from every angle of the clay model so he could draw over and make corrections wherever required.

Artist Thota Vaikuntam from Telangana had craftsmen working under him to create the clay models to his desired precision. Vaikuntam has been known among his patrons for his paintings capturing simple rural lifestyle of villagers in Telangana, mainly the women doing household chores. For this project, too, his sculptures captured women and Lord Ganesh in the rustic form.

The works of artist Krishen Khanna, who grew up in Lahore, range from carefully constructed compositions to gestural, spontaneous works. His works in the Bandwallas series captures the exuberant energy of the band of musicians. Capturing the same energy, the sculpture adds on layers to the already intriguing work. For Krishen, it was plainly enjoyable to see his bandwallas come to life in bronze with the assistance of his drawings and subsequent patina suggestions.