The loss was felt across the country as both the Prime Minister and the President mourned the stalwart's death. 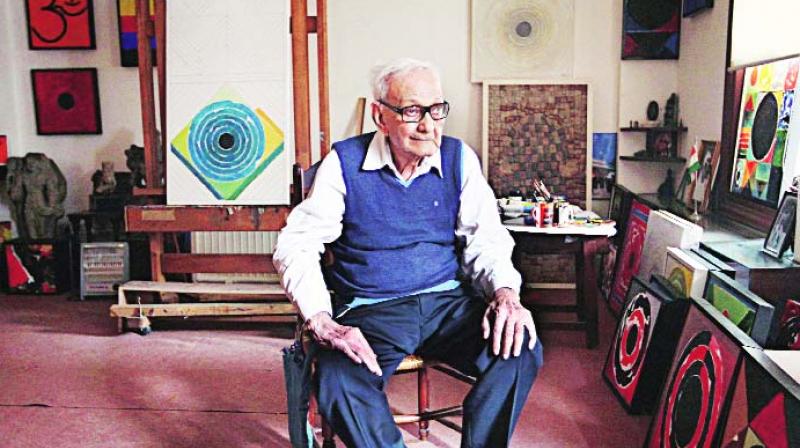 A mixed bag of veteran and new artists were showcased at the modern and contemporary fair (Photo: Twitter)

Mumbai: As the Indian art world faced a huge void with the death of iconic painter Syed Haider Raza, fellow artists, both veteran and emerging, took India to newer heights in 2016 with greater representation in national and international art fairs and biennales.

An era of modern art came to an end on July 23, 2016, as Raza, the last surviving founder of the Bombay Progressive Artists' Group Movement, breathed his last at the age of 94, leaving behind towering legacy of contemporary art.
Raza created the 'Bindu', in which concentric circles emanating from an elusive centre, transcended numerous forms and colours to symbolise myriad moods of the painter, who refused to give up on his brush even as he neared his end.

The loss was felt across the country as both the Prime Minister and the President mourned the stalwart's death.

A mixed bag of veteran and new artists were showcased at the modern and contemporary fair, with leading artists like Ravinder Reddy, Atul and Anju Dodiya being represented alongside newer names of Faig Ahmed, Ayesha Sultana and Rathin Barman.

A growing overseas interest in Indian art was evident as domestic dealers sold large proportions of the exhibited art, despite the concerns of a slowing Chinese economy and its impact on the international art market at the time.

The 11th Shanghai Biennale that featured nine Indian artists has been anchored in a continuing dialogue between some of the best minds in India and China.

The highlight of the event was a site-specific and immersive light installation titled "Storm Deities" by Indian artist Vishal K Dar.

Projected onto a traversable curtain of cascading fog, Kallat's installation presents one of Mahatma Gandhi's historical letters to Adolf Hitler, that he had written before the second World War began.

The artwork, which will be on view till March 5, 2017, also marks the tenth anniversary of the Museum's Live Cinema series, which is dedicated to exploring the vast production of contemporary video and film work.

Two works by Owais titled, "Narcissism of Minor Differences-V" (2015) and "In a play of mutual influences-IV" (2016) were presented during the programme.
A growing international interest in Indian art was also

reflected in auctions across the globe, with artworks by contemporary artists selling for overwhelming prices and setting new records.

According to London-based auction house Bonhams, the global market for Indian art has only boomed in the past two decades and is expected to continue to grow.

"In the past 20 years or so the market for Indian art has flourished. As major institutions including the Guggenheim, Tate and Pompidou have staged substantial exhibitions of Indian artists, market interest has grown. We continue to see the market thrive," Tahmina Ghaffar from Bonhams told.