Indrani Rahman’s family background was very interesting as she had Indian and American blood. 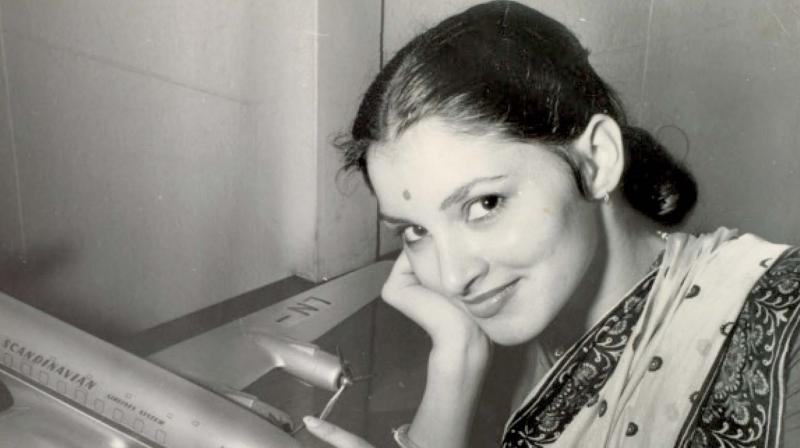 Let us all stand up and bow down to the most amazing and highly gifted Indrani Rahman.

It is said that apart from the art of dance if the dancer is gifted with an astonishing  physical beauty then it is like sone pe suhaga (best of the best) or in simple words, it can’t get better than that.

Today through the power of my pen, I would like to bring alive one superbly talented and gorgeous dancer who was our family friend and who my grandmother called the goddess Mohini (the enchantress). Not only did she had the beauty that was enchanting and captivating, she also had the unbeatable talent of four Indian classical dances. Let us all stand up and bow down to the most amazing and highly gifted Indrani Rahman.

Those of you who are not aware of who I am talking  about, all you need to do is simply open the history books of dance and beauty pageants and you will know what the legendary Indrani Rahman meant to the world of Indian classical dance and beauty contests.

If it was not for the confidence of Indrani Rahman, we would not have had Sushmita Sen and Lara Dutta receiving laurels at the Miss Universe pageant in the later years. At the age of 22, Indrani became the first Indian woman to participate in an international beauty contest, back in 1952 where she even wore a swimsuit with a twist!

I remember my grandmother telling me that when Miss Universe held its maiden pageant on June 28, 1952, Indrani was the first one to represent our country after being crowned Miss India the same year.

If you thought she could get away with the swimsuit round, well no. But hold your horses because she looked pretty sitting with the other participants. Indrani did manage to attract eyeballs among the 30 contestants, courtesy her adorable bindi (dot of the forehead) and gajra (a string of flowers)! That’s called fashion with a twist.

Indrani Rahman’s family background was very interesting as she had Indian and American blood. Father of Indrani, Ramalal Balram Bajpai was a chemist and a close associate of my great grandfather, Dr M.B. Soparkar who was the personal doctor to Mahatma Gandhi, Morarji Desai and Vallabhbhai Patel. My great grandfather would often prescribe medicines which Indrani’s father would deliver. It was a relationship that was close, professionally as well as personally. Later, her father went to the US for higher education. There he met and married Esther Luella Sherman, an American by birth who was born in Petoskey, Michigan. Indrani’s mother, Esther, embraced Hinduism after her wedding and took the name Ragini Devi.

The couple moved to India in the 1920s. Ramalal then took a job as an assistant editor of Young India, the magazine founded by Lala Lajpat Rai. After Independence, he became the Consul General of India at New York and the president of the Indo-American League. Meanwhile, Ragini Devi became a passionate proponent of Indian classical dances and devoted her life to their revival and nurture.

This happened after a fateful meeting with the great raja daasi (royal courtesan) Jetti Tayamma of Mysore from whom she started learning Bharatanatyam.

She then honed her dancing talent under the tutelage of Gauri Amma, a courtesan from Chennai. Ragini later became a celebrated dancer herself and was among the most feted performers of the 1930s. She also championed the revival of Kathakali during the same period.

Indrani was born in Chennai (then Madras) to this couple and grew up in a mixed race household. She was brought up to be uninhibited and independent by her American mother who encouraged her to participate in beauty pageants. As one of very few participants from across the country who could be persuaded to contest, Indrani was crowned the first Miss India. When she was a schoolgirl, only 15 and still underage according to Indian law, she eloped with Habib Rahman, a world-renowned architect, who, at 30, was exactly twice her age and had a son and a  daughter from him. Going by their photos which I recollect my grandmother showing me they both were quite a happening couple back then!

That’s not all about the personality and beauty of Indrani. She was already a renowned classical dancer when she took part in the pageant. She was a rare and gifted dancer who was versed in Bharatnatyam, Kuchipudi, Kathakali and Odissi. This all could happen as her training began at the age of nine. She was awarded the Padma Shri in 1969 and was also a recipient of the Sangeet Natak Akademi Award and the Taraknath Das Award. She later settled in New York in 1976. Along with her mother (who was a dear friend of my great grandmother), she continued to popularise Indian classical dances performing all over the world.  Indrani started learning dance in her mother’s company and accompanied her as she travelled through Americas and Europe. Professionally, she first started with Bharatanatyam, having learnt the Pandanallur style of Bharatanatyam from Guru Chokkalingam Pillai in the 1940s.

Later, she went to Vijaywada and learnt Kuchipudi from Korada Narsimha Rao with whom she later toured many parts of the world.

In 1947, Indrani attracted the attention of India’s leading dance and art critic, Dr. Charles Fabri, who later encouraged her to go to Orissa (now Odisha) and learnt the little-known classical dance form of Odissi, making her the first professional dancer to learn Odissi.

After learning the dance form for three years from Guru Sri Deba Prasad Das, she went on to popularise it through performances in various parts of the country and the world

In 1961, she was the first dancer present on a national tour by the Asia Society and also performed for US President John F. Kennedy and Prime Minister Jawaharlal Nehru during Nehru’s official visit to Washington D.C. Indrani also performed for Emperor Haile Selassie, Queen Elizabeth II, Mao Zedong, Nikita Khrushchev and Fidel Castro.

In 1976, she became a faculty member of the dance division at the Juilliard School at New York’s Lincoln Center for the Performing Arts. She even taught in various American universities, including Harvard, and spent her later life in the United States, touring extensively, until her death in Manhattan in 1999 with her son, Ram Rahman, dancer daughter Sukanya Rahman Wicks and grandchildren, Wardreath Wicks and Habib Wicks by her side.

You must be wondering why am I talking about her today, well, I was going through some old photo albums of black and white pictures of my grandmother and happened to stumble up a picture of this legendary dancer and beauty queen with my family.

So this article is a tribute to the legend, a way to look up to stars and say “Thank you Indrani-ji for opening doors for dancers and beauty queens into the world that today looks very simple.”

Sandip Soparrkar is a World Book Record holder, a well known Ballroom dancer and a Bollywood choreographer who has been honoured with two National Excellence awards and one National Achievement Award by the Govt of India.
He can be contacted on sandipsoparrkar06@gmail.com