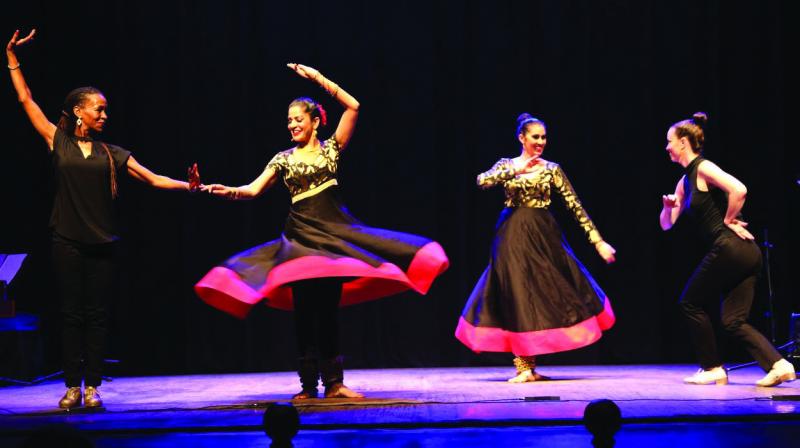 A sensational collaboration of rhythm, poetry, storytelling, music and dance is a treat

When world-renowned classical and jazz musicians come together to jam at Speak: Rhythm in feet, it is bound to thrill, provoke and move one’s spirit in the fusion that is.

Carrying forward the legacy of iconic artists like Pandit Chitresh Das, Dr. Jimmy Slyde and James Buster Brown, and bringing to the forefront the voices of powerful female artists like Rina Mehta, Rachna Nivas, Michelle Dorrance, and Dormeshia Sumbry-Edwards it was a moment nothing short of magic on the stage. Serving as a bridge between tradition and innovation, rather a history and progress, live music acts created a mystic mood of fusion was enthralling.

Performing Speak in NCR for the first time, the group was quite excited about the show. Rina Mehta one of the Kathak performers enthusiastically shares, “We had the great privilege of watching our Guruji develop and perform a collaboration with Tap artist Jason Samuels Smith over a decade. We have been watching how Kathak and Tap could be brought together for many years now.  Speak was in the making for two years before its first premiere on March 2017.”

When an artist comes up on stage prepared, he or she expects something in return from the audience. However, Dormeshia Sumbry-Edwards, a Tap dancer, and definitely a show stealer of the evening, begs to differ. She argues, “I try not to expect anything from an audience. However, this collaboration is special to us. We hope the Delhi audience enjoys the similarities and differences between the two forms of dances as we are representing our forms with integrity and authenticity.” 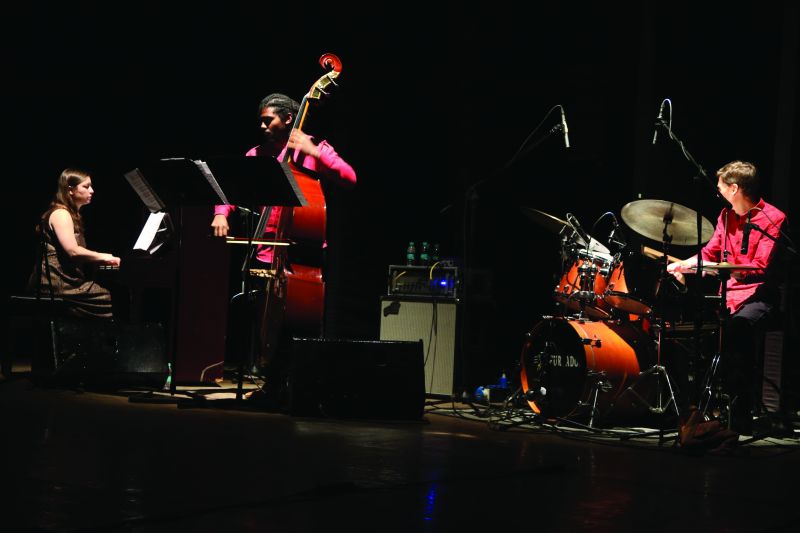 The show has been received very well by the audience and is special for all the performers. It features four women at the helm in the role of creators as well as artistic directors. Rina says, “It was important to continue the conversation between Guruji and Jason on two very different art forms and two communities after Guruji passed on the style of fusion. It was also important for us to bring in voices of women to the forefront. The response has been very positive. I think people are excited by the message of the show that ‘we can be one’ and we can celebrate our differences and yet find a common ground.”

The musicians share their enthusiasm and talk about their composition, “Our favorite part is working with a group of people, willing to go outside the comfort zone and learn and try something new. We think the show is also a model on how we can be in life. It’s okay to let your guard down and when you do that, growth happens.”

They also add, “Our favorite part is learning different ways and approach in music and rhythm of jazz and Indian classical music. We like learning from each other and seeing what happens when the two art forms come together!”

Michelle Dorrance another Tap performer feels the strongest impact is when one learns and gets inspired by different cultures, while still being able to honour her own.  She says it took many months for the troupe to develop the piece. They value improvisation.

Creating a fusion of Kathak and Tap doesn’t even sound easy. Many cannot imagine if there are similarities between the two. Rachna Nivcas, a Kathak dancer and performer, however, feels differently. For her hurdles and challenges mean inspiration. “We have definitely encountered many along the way.  As a Kathak dancer, I have to determine what are the different ways in which I can use my bare feet to produce sounds as against rival sounds made by metal taps on the bottom of tap shoes.   It’s a big challenge to translate my Kathak vocabulary on Jazz music while simultaneously maintaining the integrity and purity of both forms.”

Rachna adds with enthusiasm, “It’s so great for us to close our tour in Delhi for so many reasons. This is the capital and carries a heavy weight of Indian history, particularly for Kathak and Hindustani classical music.   It’s also special for me as Delhi is where I grew up and a large part of my own family belong.”

Though fusion, various dance forms are now trending in every nook and cranny. While, maintaining authenticity of the forms often poses a challenge, Speak has made its mark, touching many hearts.