When a dancer becomes the dance

Creation has its elementary beginnings in sound, which slowly evolves its vibrations covering the entire expanse of space with man. 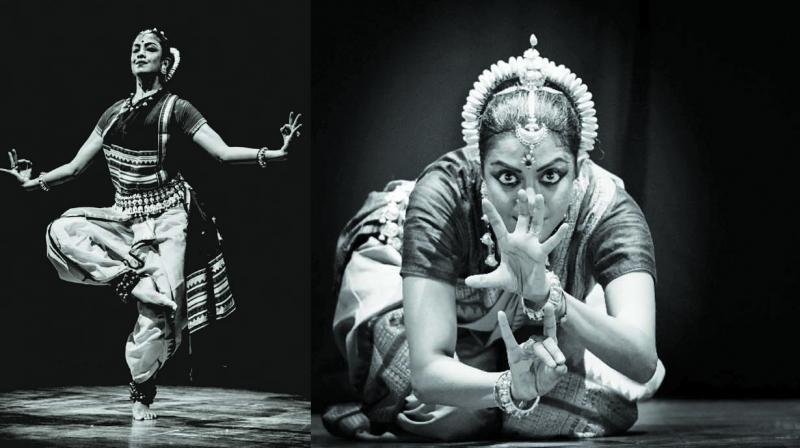 Chennai-born Preeti Vasudevan has been trained for years as a Bharatanatyam dancer, now based in New York, creating avant-garde dance works. She has travelled a long distance, spanning two very different worlds — both in her domestic and artistic life.

It is not often that one gets to see a performance where the dancer becomes the dance, as one experienced during the Odissi recital of Shashwati Garai Ghosh at the IIC. Chosen last year by art enthusiast Purabi Mukherjee, as the most deserving young artist meriting the Madhobi Chatterjee Memorial Fellowship instituted in memory of Purabi’s Mother, and disbursed by the Sanskriti Foundation that avid art supporter which organised the evening, with IIC contributing auditorium space, to showcase Shashwati’s work at the end of the year. One of the finest disciples groomed by Art Vision under Kolkata’s Sharmila Biswas, Shashwati’s unusual Odissi stems as much from the perfection of technique and exemplary angasuddha of her large movement vocabulary, as from the way this dancer has made the art form her own deeply felt expression. Full of passion and total involvement with what she is doing, the sheer ecstasy in her dance, with the individual in her ceasing to exist while performing, show her subsumed in the dance. I have always wondered why this unusually gifted dancer is not featured more often by event managers.

‘Spandan’, the programme devised through her own creativity, had well wishers somewhat anxious about how far she would go in her innovative zeal, straying away from tradition giving the dance a different flavour from Odissi as understood. But one need not have worried for steeped in her Guru’s rigorous Kelucharan school training, Shashwati’s creations lived by the Guru-prescribed requirements of the dance, along with a philosophical approach about Man in Nature — with the vibrations of the Universe and its resonances heralding the beginning of creation leading to Man’s search for Purity of Sound amidst Illusion or Maya. Like the Sruti in Mangalacharan, Bharati Swamiji’s Vishnu Stotram marked Prarambha, the beginning.

The marathon work ‘Dhwani’, meaning vibrations was woven round the process of search for truth and that divine source of creativity. Creation has its elementary beginnings in sound, which slowly evolves, its vibrations covering the entire expanse of space with man. Music gradually evolving from a soundscape into a pattern of notes and raga (Shudh Kalyan), was by Srijan Chatterjee who worked alongside the dancer assisting concept development, with other inputs in sister Nivedita’s script and rhythmic contribution by Vijay Barik. The search becomes synonymous with the gradual evolution of the dance too as movement moves from the simple to the more complex, with Shashwati’s dance visualisation revelling in grace-abounding Odissi deflections with a wide range of movements. The very imaginative start had sound syllables in the earliest stylised movement form of what the three main Odissi gurus conceived as ‘Batu’ (by Kelucharan Mohapatra) as ‘Sthai’ (by Debaprasad Das), and as  ‘Sthai’ or ‘Thei ghara Nata’ (by Pankajcharan Das). A sequence from each, with the dancer positioning herself on the extreme left, center and then right of the stage, grew into movement more decorative and beautifully held stances like Alasa, Torana, Darpana etc., and finally organised rhythm as tala appeared with rhythmic phrases — ‘Tam thai Ta Kitataka , ta Ham ta tat tat tha’, and scattered notes evolved into Shudh Kalyan rag expanding like a Pallavi in complex swara patterns. Impeccable footwork patterns with movement in all its shades smoothly flowed. Lost in the heady feel, both musician and dancer tended to become over indulgent stretching the work to 45 minutes! Despite mellifluous music with a dancer moving with such body command and winsome appeal, the beginnings of a feel of déjà vu, began to creep in. Editing can ensure crisper work with no sagging after the optimum point.

“Maya Madhav” the abhinaya section comprised a composition choreographed by Shashwati’s guru Sharmila Biswas. Depicting Rama’s chase of the golden deer as the perfect metaphor for man’s perpetual human quest — failing to differentiate between Maya and reality, the item “Harini Dhire Dhamante Sundare” (sung on tape by Rameshchandra), very sensitively composed by Sharmila, was equally well executed by the dancer. The tantalising never-ending suspense “Kettebele dhoore, Kettebele Pase” (Sometimes so far, sometimes so near) was preserved in the way the dance was devised. It made an unusual interpretative item, which fitted well with the theme of Man’s search for divinity. It was Srijan Misra’s music for the next work Nirvan — resembling Moksha with the conclusion demonstrating passing glimpses of Dashavatar (dashakruti) symbolising the many manifestations in which the cycle of never ending evil and righteousness confront each other with the latter ultimately prevailing. Shashwati had a captive audience and Sanskriti Foundation have reasons to feel happy about the choice of dancer for the fellowship.

VERSATILE HANDS WEAVE STORY OF LIFE LIVED BETWEEN TWO WORLDS
A Chennai Tamilian trained for years as a Bharatanatyam dancer, now based in New York creating avant-garde dance works, Preeti Vasudevan has travelled a long distance, spanning two very different worlds — both in her domestic and artistic life. Her considerable recognition today for creating provocative contemporary works (to mention just a couple in a list too long to be mentioned) during the last three years alone are from prestigious institutions like the Lincoln Centre Award for emerging artists, Jerome Robins Dance Division’s Research Fellowship, resident fellow for centre for ballet and the arts and several more. Preeti as an educator works with Yo Yo Ma’s silk road connect and celebrated dancer Jacques D’Amboise’s National Institute and she holds a Masters in Dance Studies from Laban Centre, London being a certified Movement Analyst.

“Stories by Hand” is conceived and created as a collaboration between Vasudevan and Paul Kaiser.

Featured in Delhi and other Indian cities, as a part of the Park’s New Festival built round emerging and new work, the performance at the Shri Ram Centre saw Preeti using the traditional Indian classical dance vocabulary of hand symbols (mudras) to tell the very contemporary story of her life — which has been lived between and amidst two cultures. She calls hers a ‘confused body’, which is Tamilian, with a cerebral quotient comprising the English language — “Tamil inside, English on top”. The performance starts with this ‘confused body’, with the dancer seated on a stool with her back to the audience. As her front faces the backdrop on the stage, the two hands are joined palm to palm at her back, in an anjali hasta greeting the audience with a ‘namaste’.  Satirically she refers to every young Indian girl’s English with its ‘convent educated accent’ as necessary to be a good catch in the marriage market! In usual style, she too sets off for the States with a brand new Indian husband after a wedding in the traditional brahmanical style with all the ritualistic/conventional accoutrements of the ‘Kannoonjal’ (bride and groom seated on a swing) after exchanging garlands, with all the ‘sumangalis’, and the nadaswaram pipe music playing ‘Sita Kalyanam’, with the traditional ‘arti’ symbolising good wishes and removal of the evil eye! But it all comes apart, while abroad, with her feelings for a person from another culture.

The absorbing narrative keeps the audience totally involved. A riveting raconteur, Preeti uses instruments from both cultures East and West with ease — her hastas (a legacy from her Bharatanatyam and her narration which is in English). The Shukatunda (woman), shikhara (man), or Hamsapaksha /shikhara (grandfather) Kapitam, mukulam, Hamsasyam, Alapadma, Hamsapaksha, eh al with the English become so expressive! One senses through the story how the individual’s life progresses amidst two cultures. There are touching moments recalling the closeness to grandparents. Preeti, visiting the by then widowed grandmother sees her living in her own oscillating world swinging on the OOnjal (swing), an inevitable part of old Tamil homes. Confession to the old lady that her marriage seems to be failing and that she is seeing another person, elicits the typical fatalistic response, without confronting the situation “Surrender every thing to him and he will solve everything.” “Krishnamurti, Krishnamurti!” she calls out to the being up above. Krishnamurti was Vasudevan’s grandfather! The entire narrative, in different ways moved round bodies and their positioning in different spaces leading to lucid explanations about the symbols of our culture. The love triangle in classical literature and art for instance has three spaces occupied by the woman, the man she is attracted to, and the ‘other woman’ who invariably triggers wrinkles in the relationship. The temple too is patterned on the human body — the entire space with the back and front, two sides and spaces in between these points (8 in all) guarded by special deities. Inside, if the flagpole represents the phallus the sanctum represents the womb where meditation takes place. As a twelve year old, Preeti saw God in the light and shadow of the burning flame. Using thick chalk powder to mark out the directions on floor space, she performs individualistic dance (Bharat-anatyam footwork influences and some virile physicality) representing the dance of Shiva. The narrative suddenly switches over to Pakistan — where dance seemed to exist only in alleys away from open life.

She touched upon her lifestyle in New York, where she lived in the cosy intimacy of the doll’s house, with her husband and eight year old daughter, now talking of a bigger house with her own room — As the world in which one lives expands with contact with other cultures, not every person is able to find himself — starkly illustrated in the tragic life of Kartik her cousin whose inability to find himself, even after coming back to India for getting married (considered the panacea for all ills) and having a family — ends life tragically and violently.

Preeti’s relaxed exchange with the audience evokes all the emotive vibrations without taking recourse to exaggerated theatre.