Rivers of memory intersect rivers of life, moving and pausing as if to weave the melodies and fecund fibres. 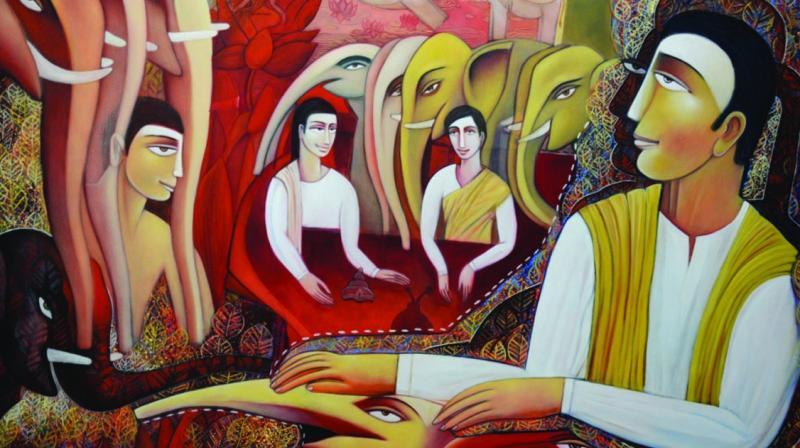 Paintings of Tapan Dash on display at an exhibition

I have always felt that the modern and global vision of an artist should be above his regional roots. And yet at a deeper level, how and where will his visual metaphors or cultural roots come from if you remove his regional roots? The ongoing exhibition of artist, Tapan Dash takes his rich iconographic early paintings further as he chronicles an expression of his personal and spiritual journey featuring flora and fauna, and human beings characteristic of his native Orissa. Elephants, bananas, palms, horses, pandits, tribal images from Puri reverberate in a shared tapestry of the artist’s vision.

His previous series of work depicted Jesus Christ, as well as pandits and priests. One often questioned the allegory depicted by the artist. Were such images confrontational? Challenging? Allegorical? In the present exhibition Expressions of Inner Journeys, at MEC Gallery Tapan appears to have reconciled some of these queries. A sort of calm balance permeates these oeuvres. Scenes of breakfasting, siestas, offerings and pujas, all reminiscent of village life even in the present day have travelled repeatedly in his heart and mind on his journey to Delhi and his progression as an artist. After 21 years of association, the parquet marble floor of the MEC Gallery appears in numerous tableaux.

His stippled, textural background effects are created with a palette knife. They appear as luxuriant friezes, pastiches of the natural world. Often they are interspersed with the flowing unbroken lines of a Brahmin’s thread, the trunk of an elephant, the spout of a teapot, the hand of the Buddha, the smoke from a chillum, interwoven with narrative aspects of personal and mythological significance. Gold, silver and opalescent paints create mystical pathways, almost imparting a sense of the cosmos and higher consciousness betwixt quotidian facets of the compositions. Serpentine dreams of a reclining autobiographical figure, heralding Tapan’s characteristic rhythmic line, reconfigures this sacred thread of the spiritual and the mundane.

Figures of personal and hierarchic existence move amidst the planar geometry and the natural elements. Tapan’s oeuvre incorporates the elemental strains of Orissan art blending the tribal, folk and classical lexicons. This body of work is inextricably linked in thematic and visual content with his homeland. Vishnu in his Jaganatha form, and Lakshmi, goddess of good fortune and wife of Vishnu, hover in the distance on certain of Tapan’s canvases. The Jagannath Temple at Puri is the great seat of his worship, and twice a year grandiose festivals are held in his honour. The temple is one of the four great Char Dham pilgrimage sites, found at India's four cardinal points. Tapan, proffers an individualistic illusionism of this realm, the ritual facets of life, blended with textural motifs, organic palettes, and verdure in both naïf and complex metaphors.

Rivers of memory intersect rivers of life, moving and pausing as if to weave the melodies and fecund fibres. According my dear friend curator and art historian Elizabeth Rogers, “Inherently, the multi-sensory nature of the activity incorporates and potentially integrates three distinct types of experience: semantic the internal process that translates a word into a series of visual characteristics, motor the planned movement of the hand as you draw/paint, and visual watching the image appear on the canvas. These various components are likely linked in some way inside of the mind, so if to retrieve one small detail or component might help reconstruct the full representation of memory, participation in collective histories, and spur future undertakings.”

Throughout his pantheon of images, his figures manifest their physical and metaphysical connections with the allegorical and surrealist settings. Their faces, often multi-layered and mirrored, many in profile, are highly expressionistic, effecting synergistic moods and spirit. Nature, faith and imagination are at the core of this Tapan’s world.

An echo of this non-duality permeated the life and world of the legendary Bengali artist, composer, educator, poet, philosopher, and Nobel Prize winner, Rabindranath Tagore 1861-1941). Tagore wrote repeatedly on threads of continuity, of dimensions of mind, body and spirit inherent in explorations and creativity. His songs spoke of the relationship of humankind to all facets of existence, a celebration of the larger consciousness of being, of art as the connective thread.

Another exhibition slated to open this week, The Vivacious solo exhibition of paintings by artist Mrinmoy Barua  curated by Nipun Soin, celebrates the vision of a life-compelling inner force that emboldens us to live life to the fullest. He explores the sparkling force and liveliness of womanhood; the moment of impact as an attribute to physical and emotional actions.

Every work is segmented for the viewers to be able to reflect. There is an underlying promenade of emotions that dig deeper than the instinct of self-awareness, zeal, warmth, eagerness, and passion.

Simultaneously, his figurative works portray sentiments of force, power, freedom, ecstasy, life and spirituality. He believes in empowerment of women and depicts the female form as a source of life and inspiration, spirituality and love. The proverb “Painting is poetry or story” is distinctively evident in his work and colour miscellany and imprint makes it more impactful.