Cities and towns can look beautiful and arty if artists can be involved in the aesthetic process to create works of public art. 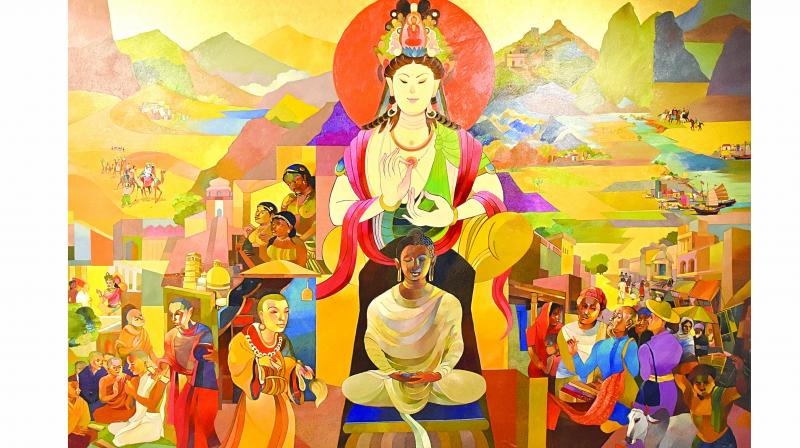 A Niren Sengupta painting on Sino-Indian relations for a museum in China.

I have always hated the segregation of colours and using them as vehicles of political commentary. For years I have suffered for wearing the colour saffron and using it in my paintings. To me saffron will always be colour of peace and renunciation and now I feel absolved. Finally the colour saffron has been set free. I have personally been at the receiving end of insulting, disparaging and barbed comments for sporting the colour saffron on the day when the Babri Masjid structure was imploded in Ayodhya. And this when I was a senior journalist in a well-known media house. The large contingent of the so-called pseudo-secular brigade in the organisation passed nasty comments in my earshot for they didn't have the guts to say it to my face and so rampant was their terror that many others stopped talking to me. It was a tough time and left many scars.

I had almost given up hope that one would live to see the day when the entire country would sport the colour saffron with pride and revel in it. Like most of India I too am euphoric about the new political order led by Narendra Modi will hopefully change for the better situations and conditions for us artists and artistes. It has been a long time since any serious attempt has been made to create conducive situations for the artists and artistes to feel pride in the tough calling that are the arts. I for one am not in favour of playing any blame game and expecting the government to play Prince Charming and rescue the damsel of the arts in distress, but to my mind some issues need to be addressed.

It is really about time too. While the Nehruvian order and subsequent governments led and controlled by his progeny was happy to play lip service and thanks to the large scale infiltration of the Left leaning artists in the art mainstream as also in the media there was no space for the any other ideology. If you were not with them you were the enemy. There are many artists who silently suffered similar bullying for there was no court of appeal.  Reminds me of those very apt lines of Faiz Ahmed Faiz:… Kisse vakil karen, kisse munsifi chahein… loosely translated it means: Who does one hire as a lawyer and from which judge to expect fair play…

To my mind the Narendra Modi government would do well to explore the possibility of taking a fresh look at arts management and create an arts cadre that will help run the several thousand arts institutions in the country. Introducing professional courses in institutes like IIM could be the first step to market the arts better towards the end of making the arts self sufficient. Steps need to be taken urgently to undo the damage wreaked by unscrupulous art galleries. In their race to extract their profits they raised the prices of art to unsustainable levels, leaving many artists in the country in pitiable conditions.

While I hope the buoyancy of the market will also lead to finally the arts coming into a happier position — as art is the last thing people invest in when they have bought their real estate and jewels and cars and other expensive toys, I hope the ghosts of the crashed art mart don't haunt the potential buyers! Both visual artists and performing artistes need to be given a better economic deal that gives them the freedom to create without having to worry where their next meal was going to come from. Tax benefits are an absolute must for private individuals and corporate sector to invest in India’s heritage be it in visual or performing arts.

Art is a very erratic paymaster, schemes must be launched to bring more artists within its ambit - after all, if assured work can be provided at the rural level for development, why not for artists, artistes and artisans? Cities and towns can look beautiful and arty if artists can be involved in the aesthetic process to create works of public art.

Enhancing the culture budgets and cutting out the corruption in the Culture Ministry will be another very important step. I have often written about how after great difficulty grants are given from the ministry and after the first installment, nothing gets paid. Years ago I had got two grants and inspite of completing the work and submitting it, the subsequent installments never got paid. A well meaning joint secretary who I approached to get it sorted, threw up his arms in despair! If this happens to me I shudder to think what the others would be facing.

Pension schemes for artists and artistes are an absolute must. After devoting entire lives for the arts, many artists and artistes end up living in misery and penury. All the arts across the board be they visual or performing, want full-time devotion from the artists and the artistes but don't pay enough to sustain themselves. It is easy for people to say that they should have saved in their hey days, ask any artist and you will know that erratic money can never lead to regular savings. And if their mathematics was so good, they wouldn't be artists in the first place!

I have my artistic agenda in this scheme of things: It is my deepest desire to see many more works of public works of art to sensitise people and make it a way of life. I want our textile heritage to be preserved if it can't be enhanced. Every city and town should have a textile museum considering that there are weaving and embroidery techniques and styles peculiar to virtually every state in the county. I want the various performing art forms to flourish and have many more takers — as teachers, pupils and audiences. There is no time. If we wait for the next generation, it will be too late. Too many masters will pass away leaving no worthy pupils — and this is across the board.

While we are on the topic of museums, Narendra Modi might consider setting up a museum of media since it has made so many strides in the last few decades that it is virtually unrecognisable. I have travelled extensively in Europe and often written how beautifully history has been preserved and made to pay for itself in present times. Can't we take a leaf out of that?

Art and artistes are the first things to be shown the door in bad times but when achche din arrive at least call them back in and sustain them so that their achche din also come! How will your civilisation be judged if not by its arts? Every generation is merely a repository of culture — it is ours to hold and enhance so that it can be passed safely into the hands of the future generations.

I have personally paid the price of daring to be Right in a Left dominated situation. I can't help recall when at a dinner at the home of a top industrialist, a rather vicious artist and self-styled ideologue, who claims descent from a prominent woman artist of the last century, made some very disparaging remarks about my saffron saree and the senior artist J. Swaminathan had to intervene to make him shut up.  I am not chicken by any definition, but it was deeply embarrassing to be singled out thus. Yet another time a Left-oriented photographer literally “saw saffron” and ran a full-fledged campaign belittling 40 years of my work in the arts calling me a Hindu fundamentalist all for my propensity for using the colour saffron in my paintings in that phase and taking the opposite view in the M.F. Husain nude paintings controversy. I wonder why I was persisting in courting trouble. Was it a sub-conscious desire to air my political leanings for my job as a journalist demanded that I refrain from taking sides? But of that, at  another time…