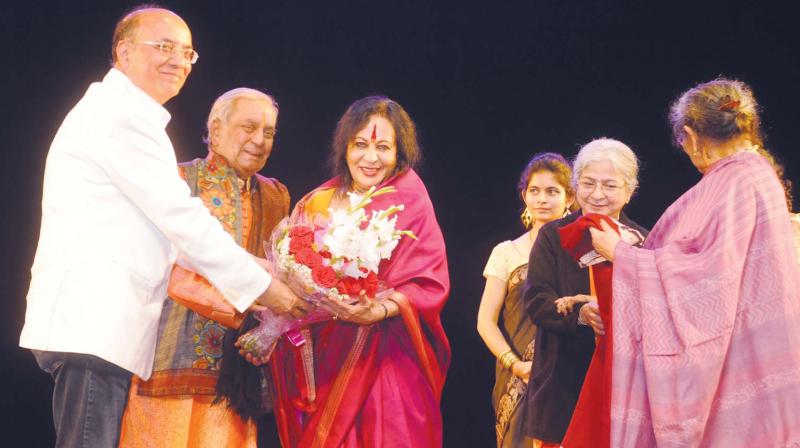 The first step of the evening comprised a felicitation honouring Dr Sonal Mansingh followed by solo performances by winner of KKC Elisha Deep Garg followed by runner up Siza Roy.

There are some dancers who are in the news all the time. Something for what they themselves do and sometimes what people do for them. Today I am talking about one such legendary dancer, the Kathak maestro Padma Vibhushan Pandit Birju Maharaj.

Recently Maharaj ji organised the country’s first Kathak Competition titled “Kalashram Kathak Competition’. Kathak professionals from all over the nation had applied for this prestigious championship and finally 16 contestants were brought together from all over India to showcase their skills at NCPA Mumbai and were judged by the best of the best from the art world. Kumudini Lakhia, Pt. Rajan Mishra, Pt. Sajan Mishra, Shekhar Sen, Padma Sharma, Maharaj himself and yours truly were the judges for the evening.

The super-talented foremost disciple of Maharaj ji, Saswati Sen ji along with her able team of Renu Sharma, Vijayshree Choudhary and many more tirelessly managed regional and the national event of his competition which saw Elisha Deep Garg from New Delhi win the Pt Birju Maharaj crown followed by Isha Phadke from Pune as the runners up. In the budding star category, Siza Roy from Lucknow won the competition while Harendra Bhushan from New Delhi was the runners up.

I asked Maharaj ji as to how he felt organising a Kathak competition for the very first time, “I feel humbled with the response we have received for KKC. It was an idea that I conceived and Saswati sen executed to perfection. My colleagues from the art world and dance lovers gave further more support and made KKC an event to remember. This was the first step but I promise you each year we will make it better and bigger.”

On one hand if KKC was an event organised by Maharaj Ji’s then “Vanaotsava” is surely an event organised by all his admirers and fans. Maharaj Ji is one lucky man I must say.  The legendary Kathak maestro turned 80 this year and like always dance enthusiasts from all over the world came together to celebrate their favourite dance guru’s birthday with aplomb. If you think there was cake cutting and a dance party then you are totally mistaken, It was not small time celebrations rather it was done through a dance and music festival “Vanaotsava”, curated by Kalashram.

“Vanaotsava” was held in Delhi, at the prestigious Kamani auditorium; this one of its kind festival is a dance and music festival in its 20th year which, like I said, celebrates the birthday of Kathak maestro Padma Vibhushan Pandit Birju Maharaj.

This festival is especially celebrated in the month of February. To commemorate the achievements and the legacy of Pt Birju Maharaj, this year the festival took a step further and honoured the world renowned embodiment of dance itself, Padma Vibhushan Dr Sonal Mansingh.

After receiving the honour, Dr Mansingh, who is also my dancing mother, said “Birju Maharaj ji and me go a long way. He is a wonderful artist, I wish him all the best on his birthday and would like to also thank him and Kalasharm for honouring me for my work. Best wishes to all.”

“Vanaotsava”, a three-day celebration of dance and music was well-attended by who-is-who from the world of art. Day one of the festival comprised arresting performances by different artists creating a whole mélange of stunning presentations.

The first step of the evening comprised a felicitation honouring Dr Sonal Mansingh followed by solo performances by winner of KKC Elisha Deep and runner up Siza Roy.

There is something new always happening in the high profile life of Pandit ji, either in the form of KKC, Vanaotsava, being invited as chief guest, receiving awards and honours or simply taking workshops all over the world. Doing all of this at the age of 80 is remarkable.

The writer is a World Book Record holder, a well known Ballroom dancer and a Bollywood choreographer who has been honoured with two National Excellence awards and one National Achievement Award by the govt of India. He can be contacted on sandipsoparrkar06@gmail.com.