The Ramayana Ballet: That which repetition cannot age

Many more Ramlila productions have now commenced all over the capital. 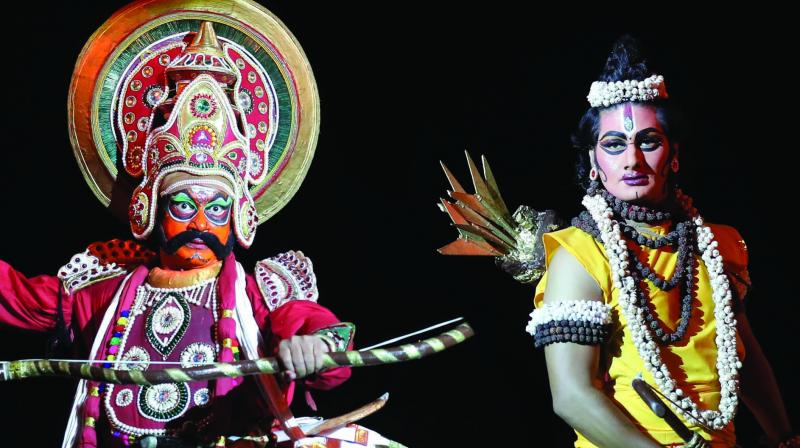 Upendra Singh as Dashrath and Swapan Mazumdar as Ravan were effective. But the actor who played Vishwamitra, was not assertive enough.

It was all of 63 years ago that the Shriram Bharatiya Kala Kendra, which had been in existence for almost a decade by then, launched the first edition of its magnum opus Ramayana Ballet, with the then Prime minister Jawaharlal Nehru in 1957 donating money from the Prime Minister’s Relief Fund for the first Ramlila. Apart from being visited by Presidents and Prime Ministers, and being the first programme to be aired when television came to India in 1967 in B/W and only in satellite villages, Doordarshan has rerecorded this work twice more in black and white and three times more in colour. Not even Ramanand Sagar’s Ramayan could dent the popularity of this production, which in freestyle technique, not wedded to any classical dance form, makes for universal appeal. From initial shows held at the Ramilila grounds on a stage of magnificent proportions made out of converting a parking lot, to being staged at the Kamani auditorium to its present venue in the open grounds of the Bharatiya Kala Kendra, the ballet had had its shifts — necessitating no mean accommodation in terms of organisation. The soundtape with background dialogues after all the initial research in the well known voices of Manohar Singh, Abhinav Chaturvedi and Shanti Sharma, scripted by Arvind Kumar, Neelabh and Ashk with music in the voices of Shanti Sharma, Jwala Prasad, Jeetendra Singh, Indu Prakash, Anuradha Nirala, Hameed, Manjeet Singh and Mahesh Pandey, have provided the unchanging rock base for the production. From a fortune spent on daily flowers and garlands and borrowed jewellery, to today’s handmade flowers and jewellery under the direct artistic guidance of production director Shobha Deepak Singh (whose own evolution as a producer, over the years this work has gained from), to dancers who had become bynames for the main characters having left, not to speak of production advisors and choreographers, the cast of dancers frequently shifting, change has been a constant factor. In a way the absence of a status quo has helped in injecting new ideas saving the producers from complacency, and ensuring a freshness of approach. While one could see movement segments in the past inspired by different classical styles, the choreography today sees a predominance of Mayurbhaj Chhau like movements along with folk form movements. This multimedia sound and light extravaganza, bridging the gulf between the divine and the human, continues to create its magical world for over two-and-a-half hours of strutting gods and demons. Starting with Valmiki’s hidden muse, gushing out as the Ramayana verses, after witnessing the ‘Kraunch Vadh’ of mating birds thanks to the hunter’s cruel arrow, to the coronation of Rama, the story progresses at a very fast clip. Some frozen tableaus of persecution, the rich costumes, the delightful palanquin in which Sita is carried in the scene where she takes leave of her parents proceeding to her newly wedded husband’s home, the hut in Panchavati , the myriad lamps in the last scene, Ram and Sita and Lakshman crossing the river on a boat with Guha and much more are all unforgettable images. The best of the characterisations came from the dancer who took the role of Kaikeyi —her slow mind change, the strutting swagger despite being isolated by the angry subjects very convincingly brought out. Manthara was another very competently portrayed character. The other very evocative role was that of Shabari, sensitively enacted. Anurag Jha as Jatayu, in the threshings of death presents a fine performance. The Bharat Milap scene in one movement of Bharat’s prostrate form, from one end of the stage sliding across the entire space to land at Rama’s feet at the other end, catches the younger brother’s undisguised loyalty. The dancer as Sita suited the role. Upendra Singh as Dashrath and Swapan Mazumdar as Ravan were effective. The role of Vishwamitra, however, neither in physical presence nor enactment, was assertive enough.

While the backdrop visuals were extremely helpful in portraying actions like Hanuman crossing the sea, or showing the optical illusions of Meghnad assuming a double image, and enriching certain scenes showing eagles like Jatayu zooming through the air long beak in front, they were often for this critic very distracting. Why when a peacock dance is being performed on stage should the backdrop flash a colourful peacock with feathers fanned out dancing? Some of the stage formations got totally lost with the predominance of overwhelming visuals.

Many more Ramlila productions have now commenced all over the capital. Constant provocation for SBKK to keep wringing the new touches!

Seems to have been a week for dance drama productions, with Lalit Arpan, the annual festival mounted by Shovana Narayan’s institution Asavari in memory of her mother, the main inspiration behind her artistic career. This year, the festival was built round two significant themes, this being the 150th birthday of Mahatma Gandhi and also the 111th birthday of Rashtrakavi Ramdhari Singh Dinkar. Film extracts of Asavari’s old productions, Sanmati on Lakshmi Bai of Jhansi based on Ramdhari Singh Dinkar’s verses and their production, Gandhi, based on Ramachandra Gandhi’s play written in 1996, were screened, with the festival curtain-raiser being the conferring of the Lalit Arpan Sammaan on this year’s select awardees from the world of art — namely dance critic Dr Sunil Kothari, Shobha Deepak Singh, director Shriram Bharatiya Kala Kendra, Mangatram Sharma, Mohiniyattam dancer Bharati Shivaji and column writer/dancer/teacher of Odissi Sharon Lowen’.

Asavari’s dance drama Rashmirathi, based on Ramdhari Singh Dinkar’s work, had as its central figure Mahabharata’s Karna, arguably the most unfortunate of all the main players in the epic. Notwithstanding involved rendition, the choreography by Shovana, Mahesh Pawar and Shailaja Nalwade, in an overplay of Kathak pirouettes (chakkars — which gave the viewers a head spin), evoked a restlessness — the quiet intensity and tragedy of a human situation where Karna, after a life of unfairness, being even in death denied fairness.  And Shovana Narayan’s female disciple as Karna, when male dancers were in the troupe, despite her genuine efforts, just did not look the role.

Among the solo recitals Shovana’s student Komal Biswal reflecting Gandhi’s ideas on women’s emancipation and empowerment, acquitted herself well. In the other envisaged solo programme dancer Mullah Afzar Khan from Singapore, by including in the programme his student, Purush Priya, who still has a long way to go, botched up his performance, neither nritta in Dhamar and Teental nor the Shiva/Shakti duet based on Ramdhari Dinkar’s poem communicating to the audience.

The Swacch Bharat dance ballet by Kavita Thakur and group incorporating Kathak, Mayurbhaj Chhau, and Odissi and Bharatanatyam dances, did a very intelligent job of ensuring within the choreography, short solo spurts for each of the dance forms, with the total crew coming together in a “tadharita radharana dheem tarana”. Songs like Vande Mataram, “Sur bana hamara” and “Ao ham milke banayenge Swacch Bharat” formed the base for a production where different dance forms blended without getting in one another’s way. And symbolising through an amalgamation of dance forms, a larger societal cooperation, the work managed to hold the audience together in the finale, through a theme like Swacch Bharat — without sounding didactic.