On the show day there were nearly 100 people backstage but there was not a single moment of negativity or feeling of competition. 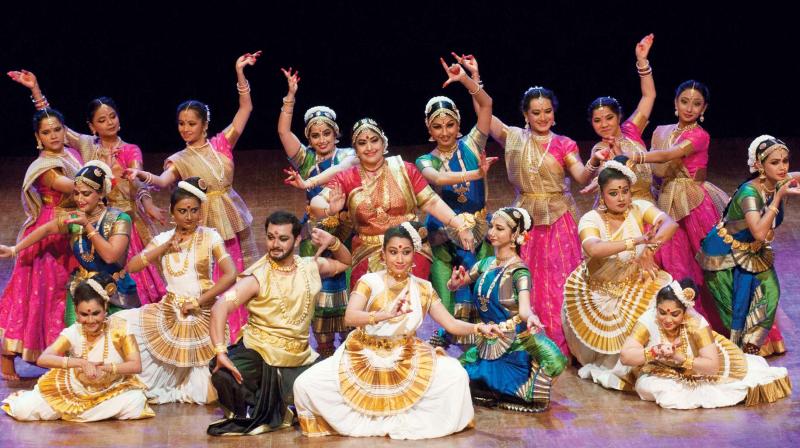 Samapravaaha was a very special event organised by the National Centre of Performing Arts, which proved that the entire dance community and dance lovers can join hands and stand up together to raise funds when the need arises.

There are many dance events one goes for, from classical to folk from modern to contemporary, but recently I had the privilege of being a part of an event with a heart. Samapravaaha was a very special event organised by the National Centre of Performing Arts (NCPA) Mumbai. Where the entire dance community of Mumbai came together and performed in aid of Kerela disaster.

I do not have any words to thank the chairman of NCPA, Khushroo Suntook for organising Samapravaaha. This magical evening was a collective effort of the dance community and I am so lucky to be a part of this. Just to give you some background. It was Mr Suntook’s idea to have events at the NCPA to raise funds for the cause. They raised money through Western music and Indian music concerts as well. Along with this NCPA offered their grandest theatre the Jamshed Bhabha theatre for Samapravaaha to raise as much funds as they could and yes NCPA employees even donated a part of their salary for the cause.

The dance programme head of NCPA, the highly creative and gorgeous Swapnokalpa Dasgupta reached out to the dance community with the idea of a multi-dance presentation in aid of Kerala, the response she got from everyone was overwhelming. Many were individually thinking of doing something to help Kerala, so when she proposed a multi-dance event most received it with open arms. The 11 artistes and their troupes not only donated their performances but also proactively helped NCPA raise the funds by helping gather audiences. It was very touching to have senior dancers donate poems, which stirred the soul of each audience member in the auditorium.

On the show day there were nearly 100 people backstage but there was not a single moment of negativity or feeling of competition. Everyone was giving, everyone accommodating and trying their best to help. Someone arranged for photographers, someone arranged for a hospitality partner, someone helped with promotion and everyone helped with ideas. It was not just dancers but even the highly talented light designer, Sushant Jadhav, donated his services.

Talking about Samapravaaha, Swapnokalpa said, “This show was especially special because the NCPA CSR children from underprivileged school who have been learning from their teacher Latasana Devi for three years performed Manipuri dance in front of a packed audience. This was the very first time they performed in such a professional setting. The evening was magical. I have no words to thank all the artistes who helped me put this together.”

The evening started with a elegant and graceful Kaikopttikali (dance from Kerela) performance in the foyer by the ladies wing of the Bombay Yogakshema Sabha choreographed by Kalashri Lata Surendra. Followed by stage opening with Daksha Mashruwala and Kaishiki, she presented Mangalam, a chant invoking the elements for peace and prosperity, which was an apt beginning to the evening.

Then was a Marathi poem written by Shubhada Varadkar, who along with Sanskrita foundation presented Virani, a dance presentation based on Sant Dyaneshwar’s literature depicting the omnipresence of Lord Krishna in nature. Seema Mehta and Chhandam presented a unique Kathak yoga piece where dancers sang the shloka, Nagma and perform complex polyrhythm. The piece opened with an ode to Lord Shiva. Kathak yoga requires tremendous stamina as the dancer requires to sing while dancing and is an innovation within tradition by the late legendary guru Chitresh Das.

Kalashree Lata Surendra and Anjali, the senior most disciple of legendary guru T.S. Kadirvelu Pillai presented “Call of my Paradise” highlighting the awakening sieved through the flux of life flooding the penury within with a sense of realisation through Bharatanatyam. She also presented a beautiful poem written for her state Kerala and later shared her memories back home.

Kathak guru Renu Sharma enacted a Hindi poem donated by her mother, she also presented Chaturang, a rare composition by the last ruler of Rampur — Nawab Raza Ali Khan, incorporating musicality and percussion in balance in the form of Khayal, Tarana, Sargam and Triwat. The Chaturang posture in yoga maintains a balanced state of the body. Similarly, she hoped for stability and balance for the people of Kerala.

Followed by Mohiniattam by Sujatha Nair and Upaasana Gopikaa Mohanam, a Mohiniattam group presentation by Jayashree Nair’s Upaasana, this choreography was very well received by the audience and many were happy to see Mohiniattma — a dance form of Kerala — being practised and taught in Mumbai.

Then Gauri Sharma Tripathy and Ankh performed a Kathak and Contemporary mix, a presentation which said there is a voice that doesn’t use words, listen to the beats and the Goonj and paying tribute through Kathak dance in building the collective rhythm. She also donated an English poem written by her student.

Then came in a lovely Hindi poem and experience sharing session by senior Kathak exponent and Sangeet Natak Akademi Awardee, Vidushi Uma Dogra. The next presentation was a Manipuri dance by the young children of NCPA Nrityaparichay (Introduction to dance) — a dance learning platform started by the NCPA. This platform currently teaches 400 children across Mumbai and greater Mumbai and has been conceptualised by fire ball Swapnokalpa Dasgupta.

The next presentation was by the students of Odissi exponent Debi Basu. They presented a very innovative Leela — the Divine Ecstasy. Next was Bharatanatyam by students of Harikrishna Kalyana Sundaram son of the legendary Kalyana Sundaram Pillai, who was present in the audience. His piece was in lightning speed which was beautifully executed by his students.

The evening ended with a multiple classical styles performance by Dr Uma Rele and her students from Nalanda Nritya Kala Maha Vidyalaya who presented Antardaaha — the goddess earth is anguished by the human atrocities in this Kaliyuga. A grand presentation with over 20 dancers filling the Jamshedh Bhabha auditorium showcasing multi-dance forms like Bharatanatyam, Kathak and Mohiniattam.

Samapravaaha was indeed a very special event organised by the NCPA, which proved that at the time of need the entire dance community and dance lovers can join hands and stand up together to raise funds when the need arises. Today I wish to congratulate Mr Suntook and his entire team of NCPA for this true event with a heart that proved we are a nation of unity in diversity.

Sandip Soparrkar is a World Book Record holder, a well-known Ballroom dancer and a Bollywood choreographer who has been honoured with two National Excellence awards and one National Achievement Award by the Government of India. He can be contacted on sandipsoparrkar06@gmail.com