Unnath Hasaan is an artist at Dooradarshan and has directed many dance ballets and choreographed various dance repertory in Bharathanatyam. 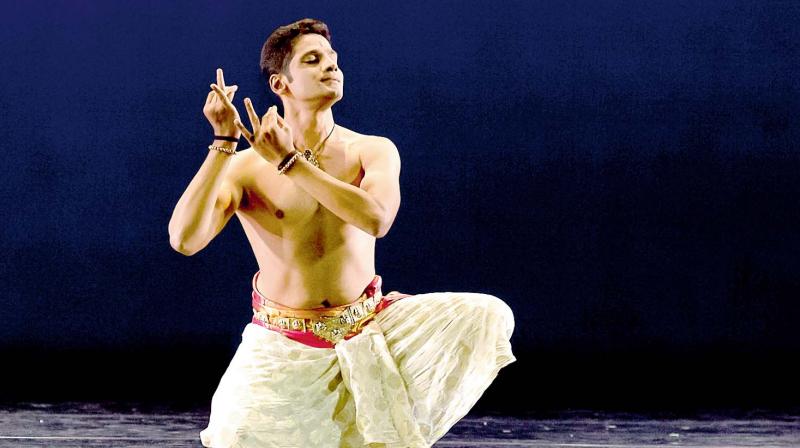 It is not often that one gets to meet an Indian classical male dancer who is handsome, has dashing personality and an attitude that reflects years of training.

My recent trip to the United States of America was fruitful and exciting because I got to meet dancers from all over the world. However, this young, dynamic Bharatnatyam dancer I can never forget. The superbly talented Unnath H.R, son of Mr. H.B Rathnaraju and Jayapadma and the disciple of Guru Vidhusi Ambale Rahjeshwari is a well-known name in the field of dance in India and abroad.

He is a post graduate in both Dance and English Literature, Vidwath in dance (professional graduate in Dance from the Karnataka State Board) and has been presented on stage in major cities of India as well as in the US, Russia, Belarus, Malaysia and Thailand, and made his Sri Lanka debut to great acclaim in 2016.

Mr Unnath has won prestigious awards and titles such as  “Ekalabya Sanman” in 2009 from Orissa, “Natya Koustuba” in 2009, from Andhra Pradesh, “Abhinaya Nrutya Koumudhi” in 2010, from Andhra Pradesh, “Natraj Gopi Krishana Samman” in 2010, from Mumbai, “Kalamandir Puruskaram”in 2013 at Peravoor, Kerala and  “Natya Mayooram” for the best performance in 2014, Bhilai, Chatti-sghar.  He stood “First for Best Season Performer” of India in 2012, Pune.

Mr Unnath is an ‘A’ grade artist at Dooradarshan and has directed many dance ballets, and choreographed various dance repertory in Bharathanatyam, specialising in the Mysore school, and folk styles.

He is the principal and artistic director of Natyakala Nivas, which was awarded the best culture revival centre for 2014, Travel Puruskar, from Maldives arts Council and GCC,  Karnataka.

He is training more than 150 students, and serves as the managing trustee for “Rathnakala Padma Kuteera Trust”.  The credit of choreographing thousands of students for Republic Day and Independence Day over the past 3 years goes to Mr Unnath. Today he has trained over 20,000 school students. He is also a member of esteemed group Prayathnam, classical dance exponents based in Chennai.

In India from Hampi Utsav to Natraj Gopi Krishan Dance Festival, from Natraj Dance Festival to Sankara and Noopra Dance festival he has performed at all of them. Dancers world over recognise Mr Unnath and his work as he has been a part of some very prestigious dance platforms such as the Battery Dance Festival in New York City, Incredible India in Huston Texas, Indian Culture Heritage Foundation, Dallas, Texas, Ganga Production at Temple of Fine Arts, Kuala Lampur , Malaysia, Performance for Rabi Chaya in Colombo Sri Lanka.

Mr Unnath Hasaan has choreographed, scripted and composed music for many ballets, some of which are Dashamaha Vidya (10 forms of shakti), Asta Lakshmi (8 forms of laskhmi), Soma, the survivor (a folk based ballet), Punyakoti (also folk based), Dasaavataram (10 incarnation of lord Vishnu), Bhakthi, Gnana and Viraagya a philosophical adoration to the bhakthi movement and many more.

Mr Unnath is also an organiser of five prestigious dance festivals namely Nrutya Milinda, an annual festival that aims in meeting the international standards for Indian performing arts, inviting professional artists from various parts of India. Suprajavath (a festival for children), Masika, a festival for native artists, that invites arts from Hassan district and includes forms such as Light Music, Hindusthani and Carnatic music, Classical dance forms. Trimasika is another festival he organises that provides platforms for traditional dance and music. This festival focuses on state-level performers, allowing them to come with creative pieces or choreographies.

Sandip Soparrkar is a well known Latin and Ballroom dancer, a World Book of Records holder and a Bollywood choreographer who has been honoured with National Achievement Award and National Excellence Award by the Govt of India. He can be contacted on sandipsoparrkar06@gmail.com