The dance form, known as Sattriya, has been performed by monks in Assam for the past 600 years as a ritual worship before the Srimad Bhagavata. 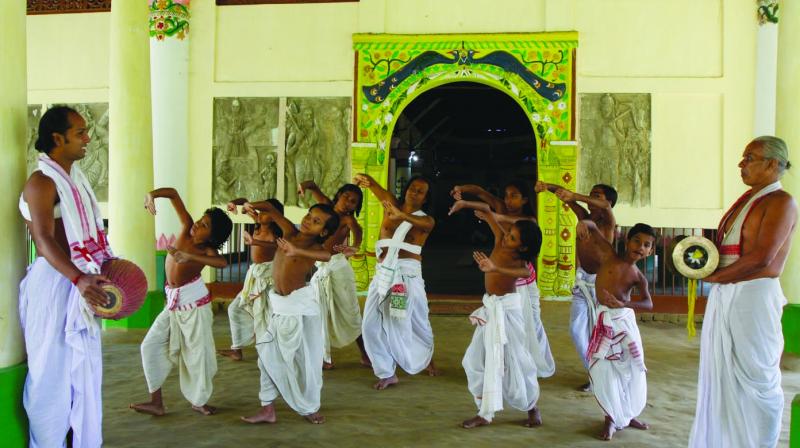 At the heart of sattra is the namaghar where music, dance and dance-drama performances take place.

Enter the stage, three monks covering their heads with scarves, wearing long skirts and black velvet blouses, impersonating milk maids of Brindavan, and start dancing to the mnemonic syllables of the khol, drum. The galaxy of dancers, gurus, critics connoisseurs, you name them and they were there including legendary Balasaraswati, Ruk-mini Devi, Mrinalini Sarabhai, Kamaladevi Chattapadhyay, scholars V. Raghavan, Kapila Vatsyayan, Shambhu Maharaj, Lacchu Maharaj, Birju  Maharaj and many more, saw for the first time dances of celibate monks from Majuli Island on banks of Brahmaputra river. That was 60 years ago.

The dance form is known as Sattriya. In Assam for past 600 years in more than 500 sattras, monasteries the monks perform dance as a ritual worship before the holy book Srimad Bhagavata placed on a throne, in a large hall known as Namghar.

The redoubtable scholar Dr Maheswar Neog had with his research witnessing these rare dance forms brought the original practitioners to perform before a wide community of dance and brought to the notice of all assembled the cultural heritage of Assam.

I was 22, a greenhorn, up and coming dance scholar attending the seminar with my mentors Mohan Khokar and Dr Mulk Raj Anand. I was completely under a magic watching these dances and other forms like Odissi and Kuchipudi. Dr Mulk Raj Anand suggested that I go to Majuli Island and do research work and prepare a special issue and book on Sattriya dances.

Based as I was in Mumbai, I was advised to go to Guwahati, meet Dr Maheswar Neog and with his letter of introduction go to Kamalabari Sattra. That happened in 1964. In those days one had to travel by train. From Mumbai to Kolkata, from Kolkata to Guwahati, from Guwahati by bus to Jorhat, from Jorhat by a taxi to Nimati Ghat and then take a boat to Majuli island at Kamalabari Sattra! It was quite an adventure on my part. Armed with a camera and a tape recorder after a long journey I reached after four days to Kamalabari Sattra. An elderly monk received me and we walked a mile arriving before a gate of Kamalabari Sattra. I was asked to leave my footwear at the gate and walk barefoot.

It was a vast campus and there were four rows of houses where monks stayed. I was to stay with one young monk by name Ghanakant Bora, who for next 10 days was my friend, philosopher and guide. When I went to meet Sattradikar, I was asked not to show my back to the Sattradhikar, the head of the Sattra Chandrahas Dev Gosw-ami. I was asked to offer my salutations facing him, sitting on the ground. I gave letter of Dr Neog which he read and received me warmly and told me that all arrangements for documenting dance and performances will be made. I requested him to give a message on my tape recorder, which he did and was amused to listen to his own voice when I played it. He blessed me.

Barring Govind Vidyarthi from Sangeet Natak Akademi, no one else from outside of Assam had ever visited Kamalabari Sattra. I was lucky to get this rare opportunity. I was ushered into the world of celibate dancing monks and watch the rituals, worship and dancing. And it was so different. Clad in white dhotis and upper garment, with white pugrees on their heads and holding khols, drums in their hands, they performed for my study ‘Gayan Bayan’ as it is called. More than 27 dancers moved playing khols creating various patterns. I had seen Manipuri dancers playing on pung and taking aerial rounds, leaping in the air. But this was different.

The well known Dashavatara, ten incarnations, based on Gita Govinda of Jayadev. was performed for my recording in its Assamese version one old senior guru demonstrated for me an item of 24 incarnations of Vishnu, which was something new for me. The mudras, hand gestures were also different for some of the incarnations. There were distinct movements of this dance form, which at that early stage of 1958 had convinced some of us of its classical character, meeting the norms of classical dance. Those ten days in Kamalabari Sattra, watching, making notes, taking photographs, discussing with gurus technical aspects, comparing different dance styles, I was able to gain firsthand knowledge of Sattriya dances.

The corpus of Sattriya dances also contained what is known as Ankiya Nat. And Bhaona. These are dance-dramas and several characters play part, using dialogues which they speak in Brajbuli, a mixture of Mythili and Brajbhasha. The great Saint Shankaradeva (1449-1568) born n Nagaon, was educated in Sanskrit and was proficient in dance, darama, music, and painting. At the age of thirty three he toured northern and central India and studied the social and cultural life of the people. When he returned after 12 years he settled on Majuli Island, a place of pure Hindu culture in upper Assam. He started   a religious movement for universal brotherhood through congregational prayer in which the primacy of bhakti, devotion is considered more desirable than mukti, liberation.

Forms of prayer include music, dance and dance-dramas based on theme of Lord Krishna. Shankardev composed Bargit, Ojapali songs as well as dances and incorporated them in Ankiya Nat or Ankiya Bhaona. He moved to Koch territory and gained unassailable mass following throughout Assam. He emphasized the worship of Vishnu, represented by a copy of the Bhagavatapurana or other sacred texts placed on an alter or the tray or on simhasana, lion throne.

An institution unique to Assamese Vaishnavism which played a major role in the success of Shankardeva’s movement was the monastery or sattra. At the heart of sattra is the namaghar where music, dance and dance-drama performances take place. Shankardeva’s chief disciple was Madhavadeva who established sattras in other parts of Assam to preserve and propagate the teachings of the guru.

During my stay I collected lot of information watching dance. One artist by name Jibeswar Goswami along with other artists established Prachin Kamarupi Nritya Sangh in Shillong in 1936. Others like Vishnu Prasad Rabha, Pradip Chaliha, and Suresh Goswami joined Jibeswar and they toured various parts of Assam creating awareness of the dance form in sattras. They tried to bring dances out of confines of the sattras on public platform. In those years artists from Assam used to study at Tagore’s Shantiniketan and also at Banaras Hindu University.

The well known singer Bhupen Hazarika was studying at BHU. Vishnu Prasad Rabha, Jibeswar Goswami and others performed before Dr Radhakrishnan, Vice Chancellor of BHU and took initiative to propagate Sattriya dances in other parts of India. By 1950s with revival of several dance forms, Sattriya, through writings of Dr Neog drew attention of scholars and Government officers. By 1958, with participation in Dance Seminar, it was accepted as a classical dance form of Assam. But the final recognition came only in 2000 during Bhupen Hazarika’s chairmanship of SNA.

It was around early seventies that senior monk Raseswar Saikia left Kamalabari Sattra, married and settled down in Guwahati. He opened Sangeet Sattra institution and took a revolutionary step of training girls in Sattriya. Indira PP Bora, Sharodi Saikia and his own daughters were his first students. So far Sattriya was performed by male monks but after this major development girls took to dancing. Today several things have changed in terms of presentation, colourful costumes and sophisticated movements, retaining the traditional core values, and practically every young girl in Assam performs Sattriya dances.

My interest was aroused after my several visits to Assam visiting many sattrasa and studying their physical exercises known as Mati Akharas and how various dance items were composed, from Ankiya Nat, like Sutradhari dance, entrance by characters as Pravesher Nach, Jhumura dance performed by young monks. Gitor Nach, Nadu Bhangi, Chali Nach, Behar Nach and so on. With help of young dancer Indira P. P. Bora who had studied Sattriya dance and Ghanakant Bora, I started giving lec- dems and drawing attention of dancers and institutions to Sattriya dances as classical dance. Finally with Bhupen Hazarika’s initiative and a conference to determine Sattriya as classical dance, it was given recognition as 8th classical dance form other three Mohini Attam, Odissi and Kuchipudi were given status as classical dances before Sattriya dances. Now we have Bharatanatyam, Kathak, Manipuri, Kathakali, Odissi, Kuchipudi, Mohini Attam and Sattriya eight classical dance forms, which no other country can boast of.

Today within a quarter of a century Sattriya dances have crossed national borders and have become a part of international dance scene. Young Sattriya dancer Bhabanand has taken it to France and recently a troupe of monks performed it in London and Washington. French artists have visited Kamalabari Sattra and have studied Ankiya Nat and have got Parijata Haran, translated in to French and have performed it at Shankaranand Kalakshetra at Guwahti.

Dr sunil Kothari is a well known critic and author