In a candid chat with Bharatiya Vidya Bhawan Awardee Dr Jayanthi Kumaresh, the maestro opens up about receiving this honour. 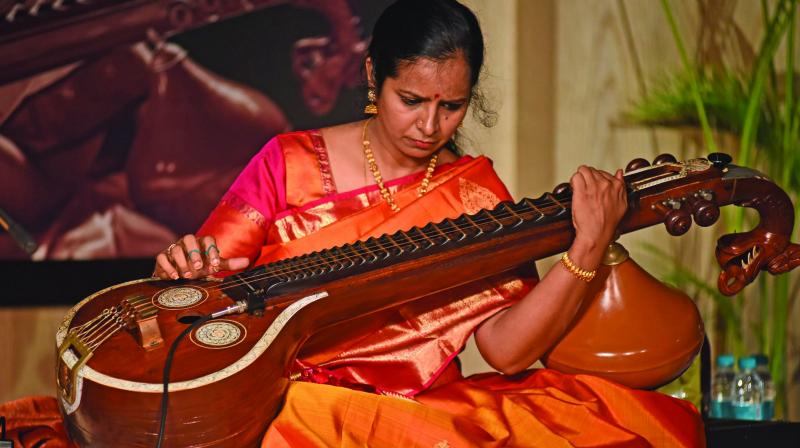 One cannot compare vocal with instrumental music – it’s like comparing apples with oranges.

Dr Jayanthi Kumaresh was in Delhi last week to receive the prestigious Bharatiya Vidya Bhawan award; joining an exclusive club of only 11 other artists including late Vidwan Balamurali Krishna, and Vidwan T V Sankaranarayan. The only other Carnatic instrumentalist to receive this award is the iconic septuagenarian violinist Vidwan T N Krishnan. Definitely well-deserving, Dr Jayanthi Kumaresh is not just a master of her instrument but has also done her doctorate on the veena. The maestro is extremely erudite, articulate and informal. It was a pleasure talking to her after receiving the award.

“When I saw the list of artists awarded by the Bharatiya Vidya Bhawan, I was initially taken aback,” shared Jayanthi. “I asked Kumaresh ji, my husband, do they know how old I am!” The nationally renowned artist is indeed the youngest ever awardee, at under 50 years. “It’s such an honour; I take it as an award to my instrument. An award of this caliber makes the whole of India look at my instrument, the saraswati veena. The perception is there are few players of this most ancient instrument, incidentally India’s national instrument, but this is not so. There are many good players in the younger generation. For me, this award is a blessing, and of course a responsibility to continue with my efforts to take the veena all over India, in the interiors of North India - specially where it may not have ever been heard.”

I asked Jayanthi about the vocal tradition vis a vis the instrumental tradition, in Carnatic music. She replied candidly, “One cannot compare vocal with instrumental music - it’s like comparing apples with oranges. The poetry and imagination of vocal music has its own beauty. However, I do feel, when you are listening to lyrics, you are limiting your experience of the music, as you are focused on the lyrics. Ganesh and Kumaresh ji (the famous violinist duo Vidwans Ganesh and Kumaresh) have been saying for a long time there should be separate compositions for instrumental music in the Carnatic system, we should not have to follow only compositions created for the voice. For instance the veena has a span of three and a half octaves; most Carnatic compositions have been composed only in two octaves. Students are mainly taught through compositions, so this can limit their initial practice on an instrument. In the last 40-50 years several instrumentalists have made compositions for their instruments, including my
uncle Lalgudi ji. (Vidwan Lalgudi Jayaraman).  I have also made many compositions in different Ragas for the veena.”

On Indian classical music, Jayanthi added, “Just like to become a doctor you spend 12 years in school, 5 years in medical school, 2 years training as an MD, to train to be a musician you need that many years. A lot of internalizing is required, our “taalim” is not only performance oriented - we are not taught to rocket straight onto a concert platform!”

In speaking about women artists, Jayanthi traced their journey. She said, “Women in our civilization were definitely given a high place - we have a Goddess of learning, not a God! Shakti is personified by Devi. Outside influences later changed our orientation somewhat.” Continuing the chat down a lighter note, I asked her what she wishes with regard to the field of classical music. Jayanthi laughed, “I wish that the institutions that exist at State and Centre levels could do even better at spending the funds allocated to promote the classical arts. I wish classical music was heard more; in trains, planes, even in elevators.”

Jayanthi frequently has accompaniment on tabla rather than the mridangam. Curious, I asked about that. She explained, “There has been a tradition of veena being accompanied by the tabla in the Mysore court, from several decades ago. I am keeping this tradition alive by frequently being accompanied by both mridangam and tabla.” On her collaborative work, Jayanthi opined, “I think making music together is more than just playing two instruments. It is the harmony of two minds.”

Jayanthi Kumaresh will be in concert on  November 24 at the India International Centre.