Celebrating Womanhood and Peace with ‘Mahasati’

Mahasati’s life imparted the message of people having the potential to elevate themselves and for the betterment of mankind. 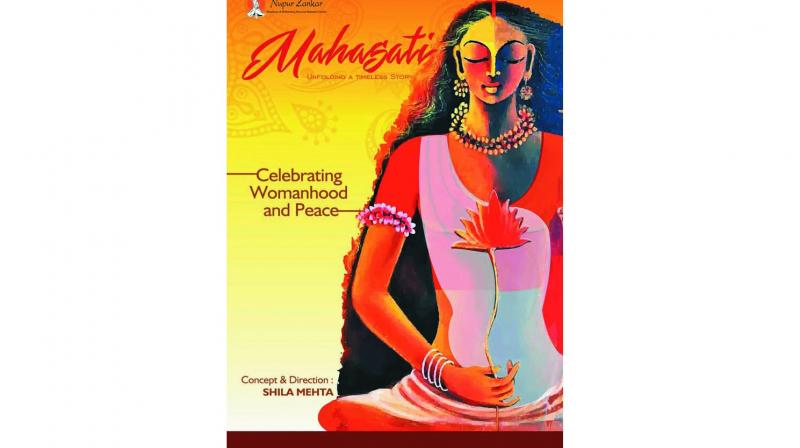 The production carries morale meaning embedded within an explosion of shapes, colours and emotions.

Whilst centuries have passed, the story of Mahasati has stood the test of time as a source of inspiration for all. Her life portrays a complex mix of hardships and struggles that would challenge even the most noble of people. It is full of all the emotions (navrasas) that we as humans have capacity to experience. Mahasati’s life imparted the message of people having the potential to elevate themselves and for the betterment of mankind.

Conceived and choreographed by award-winning Kathak Exponent Shila Mehta, this production is best described as a vibrant and colourful unfolding of the episodes from Mahasati’s life and in doing so bringing the principles of Jainism into focus in an amalgamation of dialogues, melodies, classical, and semi classical dances based on Kathak, creative and folk arts. The production carries morale meaning embedded within an explosion of shapes, colours and emotions. This unique show is a presentation by Nupur Zankar Academy of Performing Arts and Research Centre.

The credit for the entire concept and direction of this magnificent production goes to Shila Mehta. Let me tell you a few accomplishments of this super talented dancer. I have known her to be an internationally-acclaimed choreographer, a Kathak exponent, an educator, and a composer but above all a fantastic human being. She has been awarded a number of times for her distinctive style of dancing that was groomed under the guidance of eminent gurus — Pt Prahalad Das, Pt.Vijai Shankar, Pt.Birju Maharaj, and Pt.Suresh Talwalkar within the field. The awards include the Nrtiya Praveen Award, Outstanding Group of Young Persons’ Award, Senior Fellowship Award, Kala Gurjari Award and The Overseas Natya Award, Texas, USA.

With a Masters in Fine Arts, gold medallist Shila ji has been successful in combining her artistic creativity with academic enquiry, leading to the conception of “Charani Kathak” and “Chaitanya Yoga”. She has been working with academics based at York University, Toronto, Canada, to explore concepts site-specific dance and dance therapy.

She is on the panel of Indian Council of Cultural Relations and regularly tours and teaches internationally at esteemed festivals and venues in India and abroad (Europe, Middle East, Australia and North America). She has been commissioned regularly by national and international cultural and social organizations to choreograph and present solo, medium and large ensembles.

Her passion for preserving and developing Indian classical arts, motivated her to set up Nupur Zankar Academy of Performing Arts and Research Centre in Mumbai, 30 years back. Today, the academy is recognized as a leading cultural arts institute in India and has centers in USA, UK and Belgium. “When I first heard the story, the character of Mahasati or Chandanbala as she is also referred to, resonated with me. I felt a deep connection to my own life and started practising Chandanbala’s attitude towards facing challenges. I would say that adopting such an approach helped to transform me, awakening atmabala, an energy to do focused deeds, for the betterment of society at large,” she said excitedly after the launch of her show. .

“I realised that the fundamental principles on which Jainism is based are, in fact, captured in Chandanbala’s life story. What a woman she was! She became my inspiration and motivation thus leading me to conceive this production through my medium i.e. Dance. In my creative work I do not seek to promote Jainism or merely recite history. As a choreographer, the portrayal of the universal message of peace, and a strong female character with all the attributes needed to transform from a gorgeous and laukik nayika to the highest spiritual being, was most important. I have taken artistic liberty in making this production accessible to all audiences so that Chandanbala’s character can reach out to as many people as possible,” she added.

Many renowned dancers and dance lovers attend the show and could not stop praising it. “Mahasati is one of those inspiring stories replete with principles of higher life, tolerance, forgiveness, sadhana and without preaching religion or Jainism shows how one can elevate the soul to a higher realm. Very few dancers have undertaken unusual themes for dance dramas. This lavish production has narrative which smoothly flows and keeps audience engaged from the beginning till the end.The Kathak technique is used with imagination and the choreography, music, lighting and teamwork are praiseworthy,” said dance critic and scholar Padmashree Dr Sunil Kothari, appreciating Mahasati.

Legendary Manipuri exponent Padmashree Darshana Jhaveri too was highly impressed with this, one-of-its-kind production. “I personally feel the strong need of staging of such productions that highlights the longing of individual soul to merge with supreme and helps to uplift the values of life in the midst of adversities. Shila Mehta’s Mahasati is successful in bringing out the spiritual aspect of the inspiring story of Mahasati Chandanbala through Kathak and contemporary dance movements. The synchronisation of music, dance, narration, visuals, lighting were of high standard and faultless,” she stated.

When dance veterans say such amazing things you can well imagine what high standards Mahasati has achieved. So incase you hear that this spell-bounding show has come to your town or a city close to yours don’t even think twice; rush to see what magic Shila Mehta has created on stage.

Sandip Soparrkar is a well known Latin and Ballroom dancer, a World Book of Records holder and a Bollywood choreographer who has been honoured with National Achievement Award and National Excellence Award by the Govt of India. He can be contacted on sandip soparrkar06@gmail.com