An exhibition that celebrates the artistic similarity between India and Bangladesh through works in printmaking. 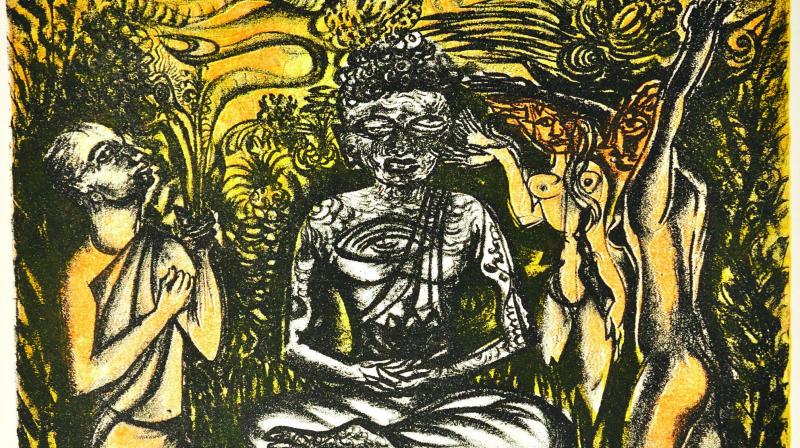 When art forms — especially in the field of visual arts — are talked about, one often talks of paintings, sculptures, installations, pop art and even frescos for that matter. But somewhere in that conversation pertaining to the visual arts, printmaking barely makes it.

With a purpose to promote and revive the art of printmaking, an exhibition titled ‘Confluence: Celebrating India- Bangladesh by The Art Route is taking place in the national capital at Visual Art Gallery, India Habitat Centre.

The show exhibits the works of 24 artists from India and Bangladesh where the artists include; Ajit Seal, Ananda Moy Banerji, Anant Nikam, Rafiqun Nabi, Rashid Amin, Rokeya Sultana, S.M Roknuzzaman are among the few artists.

Lubna Sen the curator, expresses that the exhibition is “a coming together of printmakers” further calling it a “few rare occasions of seeing the art of printmaking in the South Asian context.” She adds, “The interwoven nature of modernism in post-colonial South Asia is something that gets celebrated on such occasions.”

The exhibition is under the advisory of The Multiple Encounter, a group of printmakers. One of the major challenges of the exhibition was to get the audience for the event, as printmaking is something that is not that famous even in the world of art and artists. “We had to think of a way that would attract an audience and once they attend the exhibition, educate them about the art and printmaking and the ongoing situation of printmaking,” says the curator.

Artist Anand Moy Banerji’s works are a reflection of time and space he lives in. Commenting on the works, the artist says, “The reflection is the existence of humans as a concept and anything good or bad that happens is due to the political, social or religious reason and economical reflection of body mind and soul of humans.”

Shahid Kabir, one of the artists from Bangladesh, believes that printmaking is no different from painting as it has the same journey just done with different tools. Kabir’s works are a culmination of the human drama that surrounds him and his reflection of what he observes. He captures oppressed people, their regular activities and useable items as well as unnoticed portions of their ambiance. He adds, “My art features, particularly the underprivileged and subjugated community. Their struggles are recurring subjects of my work. My work reflects on their sufferings and untold miseries of their life,” says Kabir.