Tansen’s daughter Saraswati whom he taught, married a musician prince of repute — Raja Misri Chand, of the Chandravanshi Rajput lineage. 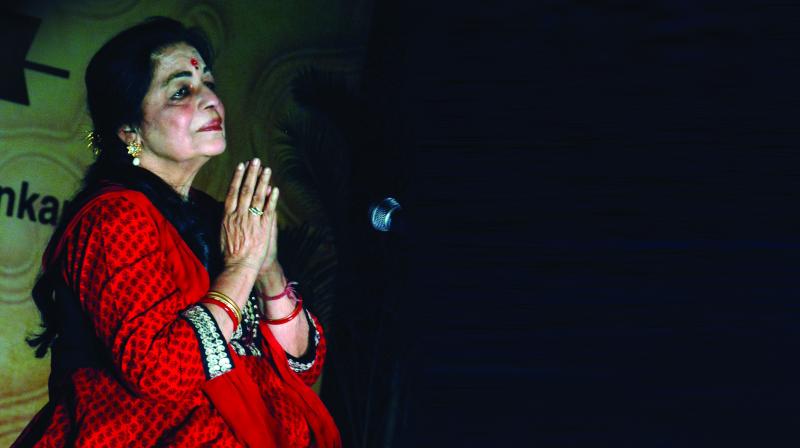 The recently-held festival in the names of Swami Haridas and his disciple Tansen brought up the issue of their music, though not much is known musically about Swami Haridas, the musician saint who lived in Vrindavan. He was a dhrupad singer, from the Dagarvani tradition; it is said he heard Tansen (1493-1506) sing as a child, his voice echoing a lion’s roar and realised his immense talent and decided to teach
him. Swamiji’s brother’s line continued the musical tradition; Pt Chookha Lal and Pt Ganeshi Lal were renowned singers who lived in Mathura in the last century.

Apparently, 20th generation representative Ustad Wasifuddin Dagar’s ancestors had received musical training from a disciple of Swami Haridas. (earlier, the Dagar family were Brahmins, Wasifuddin said) The Ustad spoke of an anecdote that he had heard about Tansen; once he was singing alone and he experienced some form of Energy present. Scared, he stopped singing and left. The next day again while singing alone, he felt a presence that asked him, “Where shall I enter?” Tansen apparently said wherever you wish, and the presence answered, “I will enter your throat.” It is believed Devi Saraswati thereafter resided in his throat, giving him an unmatched voice.

Another incident is when Emperor Akbar went to hear Swami Haridas in the forests of Vrindavan with Tansen; apparently he asked why the saint’s music had so much “asar”, to which Tansen allegedly replied, he sings for the lord, I sing for you, a king. (Tansen was invited by Emperor Akbar to his court, where he became one of the “Navratna” and adopted the new religion of the emperor, the Din-e-illahi.)

Mianji had a voice said to be unmatched in his generation, but the legacy he left behind in the generations closest to him was primarily instrumental; of the “rabab” carried forward by the male line of his descendents, and that of the “been” (veena) carried forward through his daughter’s line. Apparently, none of his sons had good voices.

Tansen’s daughter Saraswati whom he taught, married a musician prince of repute — Raja Misri Chand, of the Chandravanshi Rajput lineage. The family was also “beenkars”, of the Khandarvani style of dhrupad. The Raja took the name of Nabaadat or Naubat Khan when he converted to the Din e Ilahi. Shah Sadarang, founder of the khayal tradition (though he was a beenkar) belonged to this tradition. His brother, (some say nephew) Adarang (Firoz Khan) formulated the Firozkhani “baaj”, (style of playing) and also the Firozkhani gat. The Senia musical tradition was passed on in full to only one member of the family in each generation, the “ganda” band shishya.

In recent times, the best known descendent of the family in the daughter’s line was Ustad Wazir Khan of Rampur.

As Ustad Amjad Ali Khan put it “Ustad Wazir Khan was a scion of the “beenkar gharana”, of Mian Tansen’s daughter’s husband. Thus my family obtained the music of the lines of both the son and the daughter of Mian Tansen. (His grandfather had learnt from Ustads Pyaar Khan and Jaafar Khan of the Senia rabab tradition). In addition, Abba (Ustad Hafiz Ali Khan) learnt dhrupad singing from Pandits Chookhalalji and Ganeshilalji of Mathura who were dhrupad singers of the family of Swami Haridasji.”

Ustad Allaudin Khan, founder of the Senia Maihar gharana was also a disciple of Ustad Wazir Khan; his grandson Ustad Aashish Khan shared that “more research should be done on Swami Haridas as so little is known about him, I am not sure about which style of dhrupad he represented. There are several festivals in the name of Tansen, including one in Kolkata which now sadly has ceased, but the Swami Haridas Tansen festival remembers both legends” More is known about Tansen, who had the ability to bring rain, and fire, he added. “Our music is alive today because of them. The tradition is so rigid, I remember my grandfather would insist even on teaching Ragas at the prescribed time. I could not even practice a morning Raga in the evening, as the feeling is not right. When the spring season started, we would switch to Spring Ragas – Hindol Bahar and the like. ” Ustad Aashish Khan concluded.

This is indeed a splendid tradition, commemorated by Delhi’s largest classical music festival, the Swami Haridas Tansen Sangeet Nritya Mahotsav, which concluded in the capital last week. Organiser Padma Bhushan Dr Uma Sharma said, “I try to bring representatives of the best traditions of our North Indian music; the younger generation of listeners needs to hear what a great legacy we have.”

In the Haridas/Senia traditions were five representatives — Pt Hari Prasad Chaurasia on the flute, Ustad Aashish Khan and half brother Manik Khan and nephew Shiraz Khan on the sarod, Ustad Wasifuddin Dagar dhrupadiya par excellence, Pt Vishwamohan Bhatt and his son Salil on the their modified guitars, and on the concluding day, Amaan Ali and Ayaan Ali Bangash, and finally, Ustad Amjad Ali Khan.

The festival appropriately opened with Ustad Aashish Khan, accompanied expertly by Bickram Ghosh. A sterling performance was by Ustad Shujaat Khan who played Raga Tilak Kamod for over an hour; the delicacy of his performance was truly a delight. Tilak Kamod is regarded as one of the Ragas played best by his grandfather Ustad Inayet Khan and father Ustad Vilayat Khan; Shujaat maintained this tradition to
the core.

Amongst the vocalists, which included Begum Parween Sultana and Pt Channulal Mishra, the concert of special note was, as expected by Pt Ulhas Kashalkar, whose second Raga, Nayaki Kanhra was actually an uplifting experience. His wondrously sweeping vocal movements had an unmatched grandeur. Ustad Wasifuddin Dagar also sang one of his finest concerts in recent times, holding the more than 5,000 strong audience in wrapt attention. Pt Rajendra Gangani’s kathak was as always spectacular; veteran Vidushi Uma Sharma’s performance focused on “abhinaya” (bhaav), of which she is a master.

Amaan and Ayaan Ali Bangash played the rare dusk Raga Lalita Gauri; with expertise, keeping its small “shakal” intact. Satyajit Talkwalkar on the tabla was at his magnificent best during this concert.

The concluding concert by Ustad Amjad Ali Khan featured a Raga composed by Tansen, Darbari. This is a version of Raga Kanhra which existed before; Tansen’s version of Kanhra came to be called Darbari Kanhra as it was performed in Akbar’s “darbar” (court). Played with strictly dhrupad style “barhat” (progression), the succinct “aalap” played by the Ustad revealed his impeccable lineage.

It is amazing how this festival seems to bring out the best in each performer. This time, the festival was dedicated to Pt Ravi Shankar whose centenary year it is. Vidushi Uma Sharma partnered with Earth Day Network at this year’s edition of the festival to push the message of planting more trees, using indoor plants, and not using single use plastics as far as possible. Earth Day Network honoured her for her efforts on the opening day of the festival.

Shailaja Khanna writes on music, musicians, and matters of music