Reinventing the art of storytelling

A political satire novel by Shri Lal Shukla gets revisited as a play, Dastan-e Raag darbari. 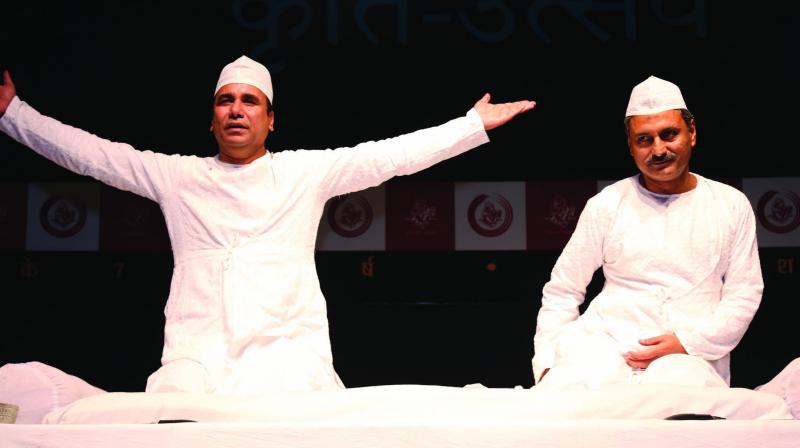 Within a span of seven years, Farooqui has taken the storytelling platform to the next level of success.

Dastan-e Raag Darbari, a two-hours play or rather a Dastangoi, mesmerised the audience present at the Stein auditorium of India Habitat Centre last Sunday evening.  Based on the timeless classic by Shri Lal Shukla along with the works of Ibn-e Khaldun, Baba Nagarjuna, Plato, Machiavelli, and Kedarnath Singh among others, the satirical play revolved around the life in a village incorporating the contemporary political scenario.

Performed by Mahmood Farooqui and Darrain Shahidi, the play succeeded in creating an ambience where the oral storytelling format of Dastangoi reigned over the traditional ‘Nukkad’ format. Farooqui, who also directed the play, reinvented the ancient art of Urdu storytelling by using it as a medium for telling modern stories. However, adapting the novel into the dastan format wasn’t as easy as it seemed. Farooqui reveals, “The work of bringing the novel of Raag Darbari to a dastan format was quite challenging. Shahidi’s contribution in moulding and reconstructing the story cannot be left unnoticed. I feel really blessed that the hard work is being appreciated and Dastangoi is considered to be an impeccable part of any cultural event now.”

Talking about the theme and the relevance of the play in modern politics, Farooqui says, “Regime changes. The story is not about a particular political party. The party in power may change from time to time, but the character trends of the ruling class always remain the same. Even the societal interactions remain more or less the same. The story portrays that reality is a lot different from what has always been penned down about the rural area of our country.”

Even without visuals to support the story, the brilliant pitching and voice modulation of both the artists trapped the audience in a state of trance. There were some glitches when the performers were stammering due to loss of lines during the play, but considering that the script was of whopping 45 pages, it surely could be ignored.

Since there is only a handful of Dastangoi practitioners in the country, Farooqui reveals who has been the inspiration for a sudden revival of the art form. “Before the revival of Dastangoi, the form was last practiced in 1928. The work has been possible only because of the work of Urdu scholar Shamsur Rahman Faruqui. I just got lucky that I came across his work,” he says. The artist expects that with the increasing number of practitioners of the Dastan format, the quality will not diminish. As there are no checks and limits on Dastan practice, he adds that it is always the responsibility of the performer to balance the quality and the quantity.

Within a span of seven years, Farooqui has taken the storytelling platform to the next level of success. Moreover, the dastan plays have been well accepted by the audiences across the globe. Gushing about the same, he concludes, “I feel really happy that people in Canada, India as well as Pakistan has accepted and started practicing the art form. As Indians, we should feel proud that we led the path to rejuvenate such an art form.”