The Ramayan is one story which is performed by many artistes through numerous dance styles. 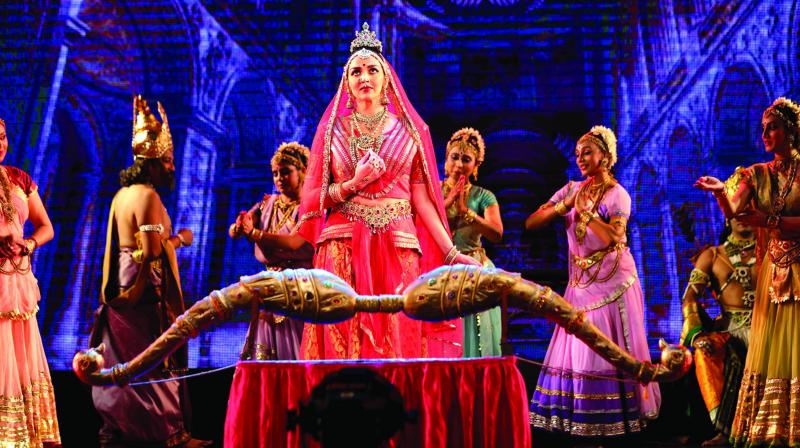 The Ramayan takes place during a period of time known as the Treta Yuga.

When it comes to stage appearances and shows by Bollywood divas, there is never a lack of fascinating and sizzling visuals equally blended with great dance, costume, make up, hair and drama.

The Ramayan is one story which is performed by many artistes through numerous dance styles. But Hema Malini’s Ramayan was a class apart. It had the ancient epic story told in a beautifully put musical dance drama format, with perfectly choreographed dance moves that brought alive each character aptly by Bhushanji.

As we all know, Ramayana an ancient Indian epic poem which narrates the struggle of the divine prince Rama to rescue his wife Sita from the demon king Ravana. Along with the Mahabharata, it forms the Hindu Itihasa. The epic, traditionally ascribed to the Hindu sage Valmiki, narrates the life of Rama, the legendary prince of the Kosala Kingdom. It follows his fourteen-year exile to the forest from the kingdom, by his father King Dasharatha, on request of his second wife Kaikeyi. His travels across forests in India with his wife Sita and brother Lakshman, the kidnapping of his wife by Ravana, the demon king of Lanka, resulting in a war with him, and Rama’s eventual return to Ayodhya to be crowned king.

The Ramayan takes place during a period of time known as the Treta Yuga. The Ramayan is one of the largest ancient epics in world literature. It consists of nearly 24,000 verses, which are mostly set in the Shloka meter, divided into seven kandas (episodes) and about 500 sargas (chapters). In Hindu tradition, it is considered to be the adi-kavya (first poem). It depicts the duties of relationships, portraying ideal characters like the ideal father, the ideal servant, the ideal brother, the ideal husband and the ideal king.

The Ramayan was an important influence on later Sanskrit poetry and Hindu life and culture. Like the Mahabharat, the Ramayan is not just a story: It presents the teachings of ancient Hindu sages in narrative allegory, interspersing philosophical and ethical elements.

The characters Rama, Sita, Lakshman, Bharat, Hanuman, Shatrughan and Ravan are all fundamental to the cultural consciousness of India, Nepal, Sri Lanka and the southeast Asian countries such as Thailand, Cambodia, Malaysia and Indonesia.

There are many versions of the Ramayan in Indian languages, besides Buddhist, Sikh and Jain adaptations. There are also Cambodian, Indonesian, Filipino, Thai, Lao, Burmese and Malaysian versions of the tale.

When I asked our dream girl how she felt while directing Esha as Sita, Hemaji laughed and said, “As a kid, Esha was naughty and would rarely listen to me. Finally I am glad I could have my way at least on stage.”

Bhushan sir choreographed and executed each part of the dance drama so perfectly that it looked as if it was not Esha Deol telling us the story of the Ramayan but it was Sita herself talking to the audience in regards to all that happened in her life with the ultimate man Ram played beautifully by a super-talented and very handsome Mithun Shyam.

Happy and contented, Bhushanji praised Esha’s work and said, “Esha has completely taken after her mother, she is a very fine dancer and a performer, she emotes brilliantly and understands the nuances of the character very well, I was glad to choreograph Esha as Sita.”

Talking about dancing on stage, Esha said, “From a very young age Ahaana and me would see our mother practice and rehearse tirelessly, so dance is something that came naturally to both of us.” Explaining further about how she felt while playing the complex role of Sita, Esha said, “Playing Sita is a big responsibility and I am glad it came to me at this stage of my life when I am a mother, more mature and responsible as a human being. So I feel I could do justice to playing such a beautiful character.”

Mithun Shyam who played the calm and composed character of Lord Ram was actually super excited about this role. An overwhelmed Shyam said, “I consider it a huge learning curve working with Bhushanji. He is a very learned and experienced master. I got the opportunity to watch a video of his performance recorded over three decades ago. I practiced based on the choreography. It was a challenge to justify such a role. Bhushanji himself guided and gave me some very valuable suggestions to enhance my performance. On the other hand, Esha is a pleasure to work with, she is extremely professional and carries herself with amazing grace and dignity. She was Sita to the T.”

So did Bengaluru-based Mithun’s dream come true of meeting the dream girl? Thrilled with joy, Shyam further added, “To meet Hemaji was indeed a dream come true. When I was called for an audition I was truly stunned. I wasn’t apprehensive about being selected for the role but thrilled beyond words that I would be meeting ‘the Hema Malini’ herself. Initially, when she spoke to me I was too tongue tied and I told her that I was unable to speak. She in her diva style laughed and spoke about dance and asked me about my training, etc. Then she told me about her expectations for the role, she gave me the exact image she wanted me to portray. Later Hemaji herself attended, checked and directed us, a dream coming true for me indeed.”

Every performer has a bit of nervousness before a show, so did our gorgeous Sita feel the butterflies in her stomach too, An excited Esha replied, “Well, yes before every show one is nervous and so was I, but all the dancers, my co-actors and we all bonded well so the anxiousness was settled.”

After Sita what role would Esha be keen to play was something that was running on my mind and when I asked her about the next character she would want to portray, she gave me a very spiritual answer, she said, “I have always believed that, we do not choose what characters we want to showcase, it is the divine energy up there that chooses us to tell their stories, we are just a medium which the divine uses to narrate their life and reach out to the audience.”

But still there must be some character that fascinates her and it would be a blessing to play that part? When quizzed about it, an emotional Esha answered, “When my mother used to play Meera, I would always play the young Meera, now that I am grown up, I hope I am sanctified to play the mature Meera one day.”

Ramayan, directed by Hema Malini and choreographed by Bhushan Lakahdari, is a visual treat. I suggest that if you hear that this show is in your city or is coming to your city then please make time and go and see the ultimate epic presented glamorously and alluringly by the team that is known to bring alive our Indian Gods and Goddess like no one else does.

Sandip Soparrkar holds a doctorate in world mythology folklore, is a World Book Record holder, a well known Ballroom dancer and a Bollywood choreographer who has been honoured with three National Excellence awards and one National Achievement Award by the Government of India.

He can be contacted on sandipsoparrkar06@gmail.com