Durga idol is incomplete if it doesn’t include the clay from a prostitute’s house. 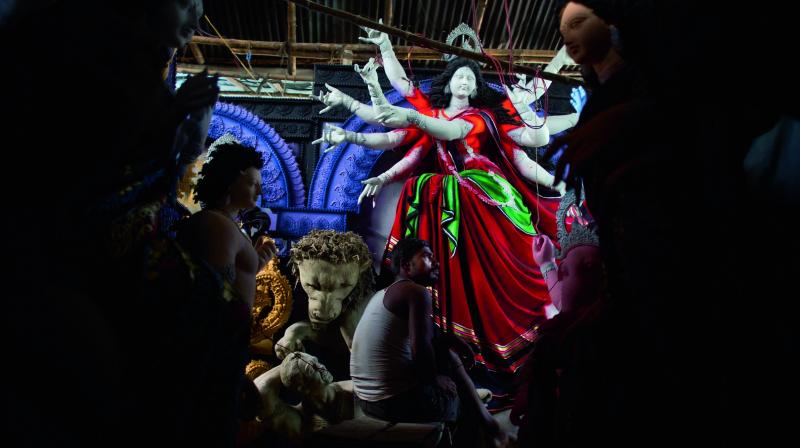 An artisan takes a break as he makes idols of goddess Durga ahead of Durga Puja festival in Gauhati. (Photo: AP)

I am an out and out parijat lover. Parijat or harsingar or shuili with its milky white petals and tiny tangerine stem is one of the most delicate flowers that appear in this season. Few will know that it is the only flower than can be offered to the Goddess Durga even if it has fallen on the ground. As if it is nature’s way of heralding the Goddess for the harsingar has a short span for it flowers during the Navratri which would have begun when you read this newspaper, as if born only to be offered to the Goddess as she is worshipped in nine rupas or manifestations during the nine days.

Incidentally, the Durga idol is incomplete if it doesn’t include the clay from a prostitute’s house. Its sociological implications are not far to seek. Obviously it was society’s attempt to include and accord status, in a symbolic manner, to the most marginalised and alienated groups.

Classical, traditional and folk artists across the country have both male and female have experimented and continue to experiment with the Durga iconography to depict their understanding of the Goddess and her parivar. I have wonderful memories of Kolkata during the pujo as it is like a veritable feast for the eyes during this time with every mohalla or pada having their own installation. From betel nuts to shola pith to textiles to clay to paper and everything else in between, artists have innovated in every which way. Just as one thinks that one has seen it all, one is surprised by another artist’s interpretation.

For those not familiar with the reasons of the Navratras, when the navgrahas or nine planets that are said to descend on planet earth during this period, and yet the festivities during this period revolve around the Goddess cults. According to legend, the forces of evil had run amok in the form of the demon Mahishasura. All the Gods pooled in their resources to arm Durga, who after nine terrible days of battle, defeated Mahishasura when he appeared as a demon buffalo on the tenth day. The other belief is that the nine forms or rupas of Shakti (Lord Shiva’s consort): Mahakali, Mahalaxmi, Mahasarawati, Yogmaya, Raktadantika, Shakkubhari, Shri Durga, Bhramri and Chandika are worshipped.

In the East, Puja begins on the sixth day of the navratras and culminates on the tenth day of Bijoya with ceremonial visarjan or immersion of the goddess image into the water amid much tears and deeply moving scenes, for returning unto the elements what is essentially theirs.

In the Western parts it is party time with Gujarat livening up matters with the traditional garba and dandiya dance that has everybody in its grip. There is a tradition to dance in a circle as it signifies life eternal. On the other hand, the Vaishnavites remember Lord Rama and enactment of the Ramleelas all over the north is still is an important part of the cultural calendar. The Ramnagar Ramleela in Banaras of course leads the brigade with its spectacular enactment and changing venues when the entire city moves to see it.

All this culminates on Dusshera or Vijay Dashmi, the day when the Demon Mahishasur was vanquished by the Devi in her Durga roopa. And the day Ravana met his nemesis at the hands of Lord Rama. I can’t help but remember all the wonderful Dussheras I have had trying to build a rather basic type of Ravana that would just barely go off! The nitty-gritty of fixing the crackers bought after pooling our piggy-bank resources and an indulgent uncle or aunt paying the rest, would be handled by the more “experienced” boys of the locality. Except a mild admonition to be careful, we were mostly left to our devices.

The other best part of Navratri used to be private celebrations taking place in our north Indian homes that invited us pre-puberty girls to eat the kanjak prasad of puri, chole and halwa on the ashtami (eighth) or navmi (ninth) as a culmination of the Navratri pujas. All those neighbours who would chase us when our cricket and footballs broke their window panes, would be washing our feet on these days! Ah the sweetness of revenge!

South Indian friends revelled in the decoration of the gollu or bommai. Literally meaning dolls, it may have started as a reiteration of the child in every adult and perhaps to amuse the young child brides of earlier times, it used be an important cultural landmark. Dolls were carefully displayed and a certain competitive spirit ruled as to which home had the best display. I remember scampering from home to home to ogle the dolls and eat the prasadam! I wonder what they display now — emaciated Barbies and tacky yet over priced Chinese toys?

The other two spectacular Dussehras are easily those of Mysore and Kullu. Mysore is almost synonymous with its annual Dusshera procession.  Chamundeshwari, the patron goddess of the Mysore Royal family is worshipped with great fervour. A spectacular procession of floats, entertainers and elephants wends its way through the streets of the city, complete with the erstwhile scion of the Mysore royal family astride an elephant.

Not to be outdone are the Dussehra celebrations in Kullu, nestled in the lap of the Himalayas. The celebrations begin nearly 10 days in advance and as per tradition, Gods and Goddesses along with their retinue of musicians playing the grandly curvaceous Kullu pipes and other attendants descend from the neighbouring peaks on the relatively flat zone of Kullu to make merry and attend the durbar of Lord Raghunath, who was brought from Ayodhya nearly 300 years ago.

It is interesting to see how the elements, nature, the collective and the individual are woven together in an amazingly fine tuned pattern from which emerges a rather coherent pattern of a lifestyle, incorporating the most lowly to the most esoteric, spanning this world and the next in a celebration which has a logic that is as earthy as it is eclectic.