Shock value of art has gone up, says V Ramesh

V Ramesh, a prolific painter and an art teacher, believes it is important to find freedom even within boundaries. 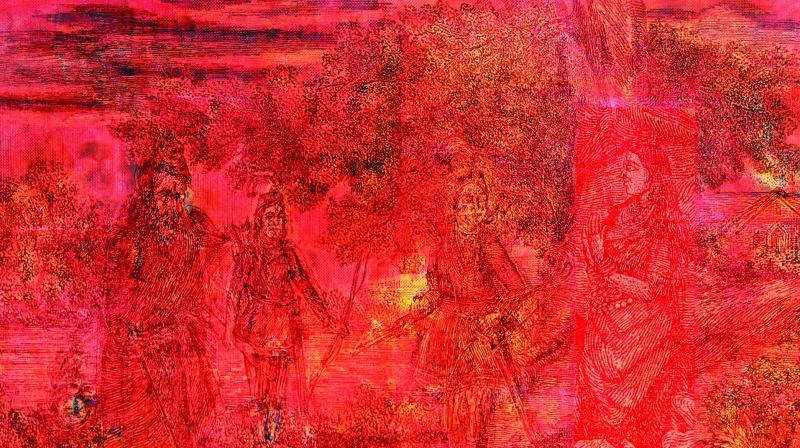 That Moment of Epiphany, oil on canvas painting where the human figures are hidden behind the mesh of brushstrokes of myriad hues.

We are talking art, in English and Hindi. “But I am sure if there was a third common language we knew, we would have latched on that as well,” says artist V. Ramesh. But why this scrutiny of language? Because as a prolific artist, V. Ramesh believes in all kinds of artistic languages — abstract and figurative, oil and water, monochrome and a myriad of hues. That is what one observes at his ongoing exhibition in the city — several artistic languages speaking volumes about the command of this artist over the mediums.

The ongoing exhibition is his first solo show in five years and showcases various works he has done in the last two years. The artist considers himself fortunate that he can now have coffee with eminent artists who he stood in absolute awe of in his early visits to the national capital. So, what has changed in the art scene drastically? “Well, the shock value of art has gone up and that’s understandable. Now, there are so many art colleges and art students and so few art galleries and buyers that everyone is desperately seeking attention. I am not judging the trend, but there are few people who haven’t  resorted to this and to be honest, I have stayed true to my own sensibility and subtlety of art. One of my students thought it was creative to make an artwork of inflated condoms and for me, it was a stupid idea. Any art practice should be truthful to one’s conviction of reality and not depend so much on borrowed ideas,” he says. 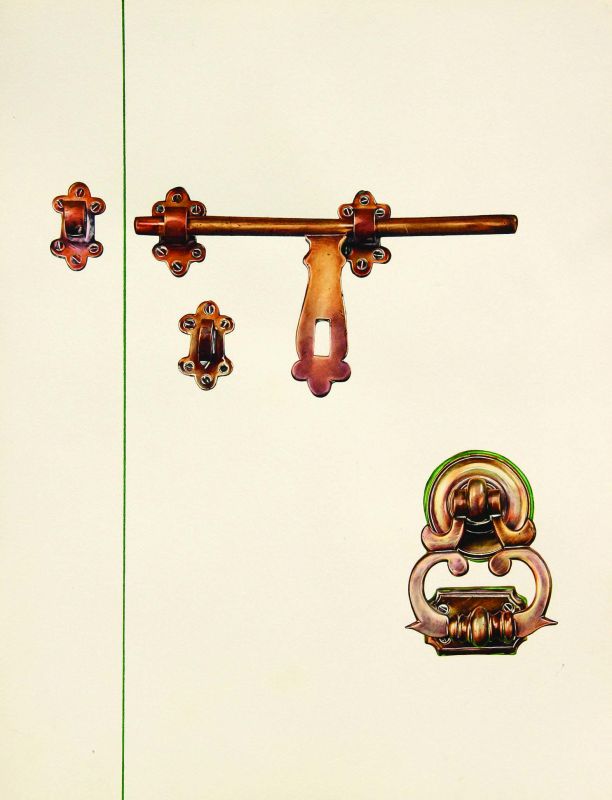 An untitled watercolour painting on paper.

Asked if he teaches his students to do the same, he shakes his head in denial. “Instead, I tell them to question everything I teach. They don’t out of respect but young guns need to challenge the status quo. They must feel free to do what they think will satisfy their expression of creativity,” say Ramesh, who was the first practicing artist to have a solo show at the NGMA, Remembrances of Voices Past, Bengaluru in 2014. He has been teaching in the Department of Fine Arts, Andhra University, Visakhapatnam since 1985. 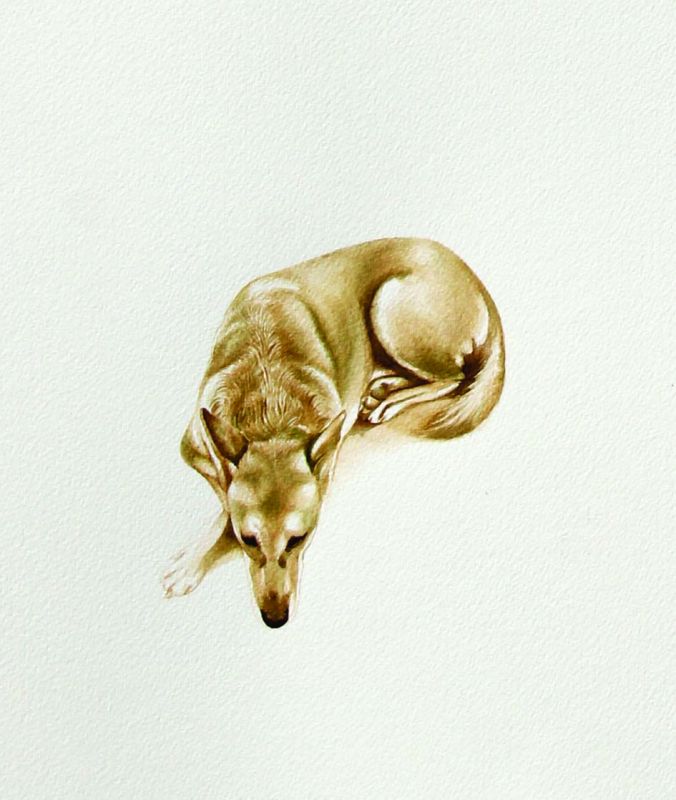 Ramesh’s paintings are densely layered in metaphors and his images are drawn from repositories of cultural and philosophical traditions. His latest body of work combines two different facets of his oeuvre — small watercolours with minute detailing and large mixed media canvases. A section of his exhibition depicts incidents from mythology and he credits his grandmothers for that. “It was my way of revisiting the stories told to me by dadi and nani when I was a kid. An idea is like a seed that I sow in the back of my mind and if it comes out as a sapling, I paint them. Some seeds die too,” he says.

In the paintings, a mesh of multi-coloured strokes covers the human figures. “Well, that is my way of making the art a bit more complex. If a viewer stands before the work a bit longer to decipher what the artist has done here, I will take it as a meaningful experience and a sure-shot success,” he says. 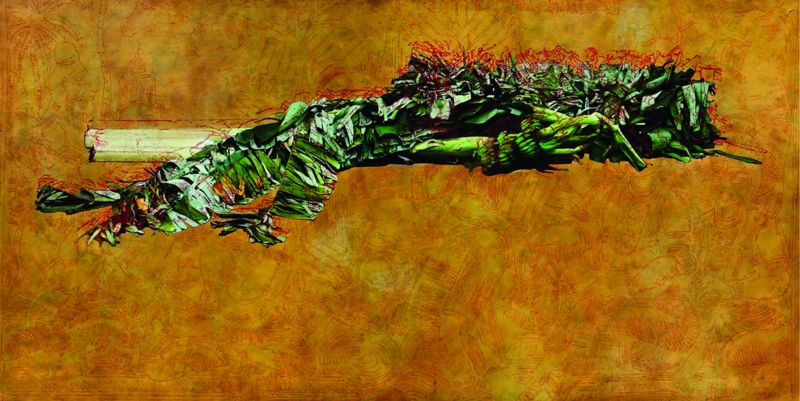 The Fallen Warrior, an oil on canvas painting.

He acknowledges preferring figurative work over abstract. “I start with figurative and keep doing something to make it abstract and stretch it to its tension limit where one more stroke will ruin it all,” says the 59-year-old who did his post-graduation in Fine Arts from M.S. University, Baroda.

But there is more in the exhibition besides those ‘complex’ oil paintings. Most of his works are imbued with a deep personal reverence and hint at faith and devotion. Few of the watercolours, for example, are simple artworks narrating a personal story.

The exhibition is Ramesh’s dedication to his many visits to Ramana Ashram (near Chennai) and the way they shaped his being. A section portrays the dogs nears the Ashram as devotees and the paintings are totally uncomplicated. This is where he brings the ‘language’ point again and explains that he decides which language to pick for which story. “There was a time when I was scared of water colours but now I have no hesitation. And I find the whole experience very liberating. See, I work both as professor and a painter — at one place, I am under the varsity’s guidelines and in my studio, I am a free bird. So, I have come to enjoy these dichotomies. I like classical music as you have to be within a boundary in that but in the same boundary, you can show your creativity. Though, there’s no one to put barriers on me expect for me, it’s about finding that freedom in that boundary,” he says, signing off.

On till March 10 at Threshold Art Gallery, Sarvodaya Enclave