An exhibition that displays the essence of Cambodia through the eyes of 10 of its artists. 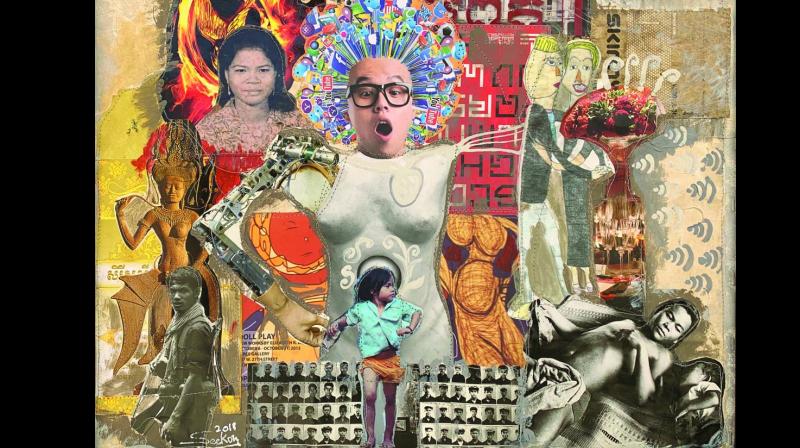 What defines a country? Is it the culture or is it the GDP? Honestly, there are no correct answers to those questions. However, if you really want to understand a nation’s people, delve into their art and culture.

If you are looking for a country to start with, go for Cambodia, especially if you are in the capital. After all, an exhibition called ‘Out of Line’ is presently underway at the Akar Prakar Contemporary, where 10 Cambodian artists are displaying an ensemble of works across styles including figurative, abstract and the unique kbach, which is a traditional Cambodian style.

Erin Gleeson is curating the show. On its naming, she comments that the exhibition’s title means different things to the different artists. She explains, “The artists and these particular works have, in their own contexts — and not only a national context of Cambodia but also personal contexts and trajectories of each artist — represented or signalled something mischievous, in terms of artistic practice, subject, materiality, as well as (something) deviant within their social and political environment.”

The curator believes that the works on display are a testament of freedom. At the same time, they appear to have a certain ‘rawness’, to which the curator wholeheartedly agrees. She comments, "Each work speaks of personal experiences, thinking and practices of each artist."

In fact, among the 10 artists, five — Tith Kanitha, Yim Maline, Than Sok, Svay Sareth and Leang Seckon —work with “unrefined” material or use the material in “unrefined” ways. She affirms, “This is not intended to raise the notion of essence relating to a nation or identity. However, it does lead to intimate personal narratives per artist.”

Talking about the kbach design that was the talk of town, Gleeson explains that it is derived from nature — the circle is a fish egg, the stele shape a buffalo tooth, a pointed arc the lotus petal, etc. Historically, it has been woven into silk, cast as iron fencing, carved into stone temples and silver bowls, among other things (after all, it is more about decorative elements). It has been used both to celebrate and to instrumentalise or differentiate identity.

Three of the artists approach kbach in very different ways. In his newest series, Than Sok is honouring the five kbach dteuk, or water forms used to narrate epic Hindu and Buddhist stories on temple walls. He is also inventing new forms according to his own stories.

One wonders, what kind of Cambodia does the curator want viewers to see? To that, she concludes, "The show aims to put forward more subtle access through such a broad survey of artists and practices." And it definitely does that well.

The exhibition is ongoing